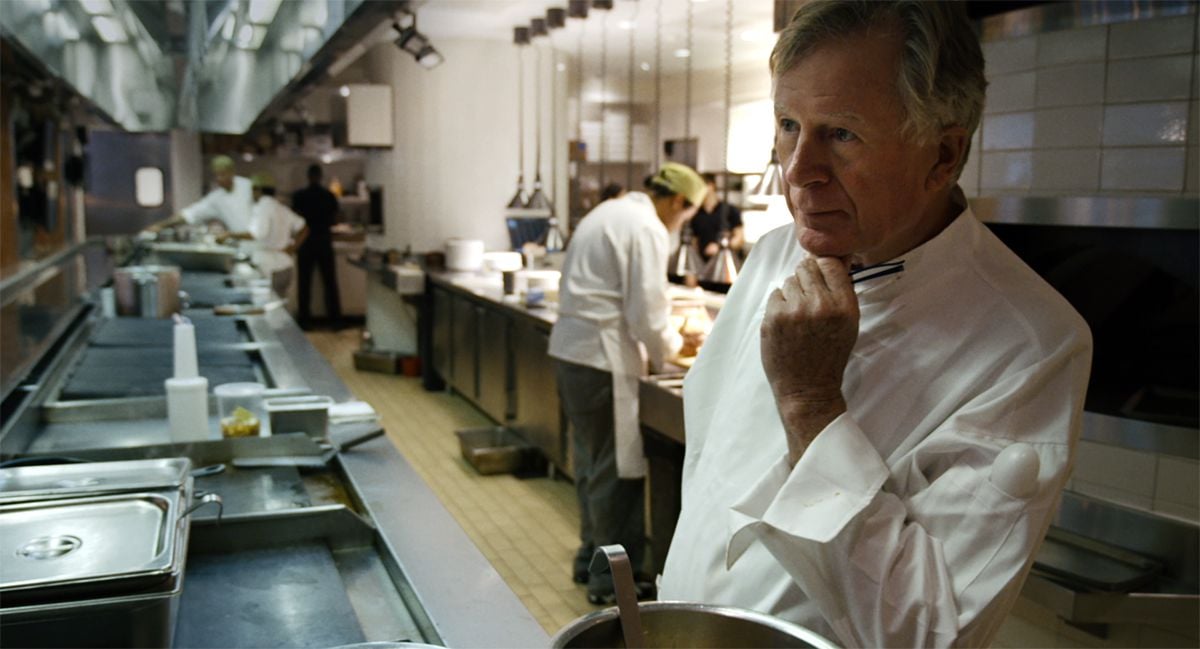 As with many films concerned with the arc of an entire remarkable life, Jeremiah Tower: The Last Magnificent occasionally strains itself trying to cover a vast amount of subject matter over a succinct running time. Lydia Tenaglia’s documentary is composed of five sections, each quickly sketching a passage of the biography of controversial celebrity and culinary figure Jeremiah Tower. The Last Magnificent begins with a vague, wandering, and highly stylized portrait of Tower’s childhood and early adulthood, before more distinctly outlining: his culture-shaping rise to prominence as the chef of Chez Panisse in Berkeley; his subsequent launching of the Stars restaurant in San Francisco; a years-long disappearance; and, finally, a brief and unexpected return to the limelight as the head chef of New York City’s Tavern on the Green, which isn’t known for attracting talents of Tower’s stature.

The first section of the film is staged as an oblique yet obvious Proustian ghost story, as Tower remembers his rarefied yet lonely upbringing with parents who ignored him yet enabled him to travel the world aboard luxury ocean liners such as the Queen Mary, taking comfort in divine food, once notably wandering a beach alone and encountering a man who cooked barracuda over a fire. Tower’s adult voice is layered over recreations of these scenes, which include sumptuous close-ups of various dishes and are filmed in a haze of colors to suggest a past that’s unreachable yet ever-present. Interspersed with these sequences are shots of a contemporary Tower wandering Mexican temples and ocean liners, as wind ruffles his immaculate white shirt while he strikes fashionably tormented poses that liken him to an autumnal rock star. This first act is redundant to the point of being nearly laughable: Imagine if Citizen Kane revealed the significance of Rosebud in the opening scene and underlined it repeatedly and explicitly throughout the film.

The Last Magnificent comes to life when Tower reaches Chez Panisse as a rootless graduate from Harvard, a man of unapologetically high tastes and political myopia who finds himself cooking in Alice Waters’s ramshackle bistro among antiwar bohemians. Tenaglia has found a wealth of footage of Chez Panisse, which she weaves with celebrity interviews to forge an exhilarating and strikingly accurate account of the sexual excitement of working in a restaurant, which involves long and demanding hours that naturally encourage all-night partying and interludes with customers and co-workers. A dashing, commandingly cultivated figure (he bears a resemblance to actor Bill Nighy), Tower is sought by everyone in his periphery, and, though he identifies as gay, he has his fill of both genders, mixing work and play in a manner that produces complications. More complicating yet is Tower’s growing conflict with Waters over the direction of the restaurant: She favors new French cuisine, while he’s drawn to distinctly American food.

This evolution in sensibility leads to the opening of Stars, which embodies Tower’s longing for fantasy in the face of atrocity, as the building is flanked by a grimy, poverty-stricken alleyway which customers must navigate to reach a realm of palatial splendor. Stars would have a lasting impact on the New American cuisine, as Tower helped to pioneer many prevailing notions of restaurant culture, particularly the idea of the chef as superstar, with a visible kitchen that suggests a stage, and the pride that Americans now take in their gastronomical heritage, as a refutation of feelings of inferiority to Europe.

A studied formal fanciness creeps into The Last Magnificent again, perhaps out of Tenaglia’s fear of her documentary becoming a procession of celebrity talking heads. The filmmaker weirdly elides the fate of Stars, intercutting details of its demise with footage of Tower’s subsequent disappearance and eventual hiring at Tavern on the Green, halting the narrative’s momentum for no ostensible purpose. But The Last Magnificent has become so compelling a story of a spurned and brilliant eccentric by this point that these regrettable flourishes are negligible. Tower takes over his own film, and Tenaglia drinks him in as he fires off angry emails to the owners of Tavern on the Green or confronts incompetent support staff in the kitchen.

It’s evident that Tower’s talent isn’t understood, just as it’s obvious that he can’t work for anyone—a trap familiar to artists. Tenaglia’s direction is occasionally flashy and cluttered, but her empathy for Tower is evocative and poignant. Tenaglia understands the power of an iconoclastic chef as a musician of the soul, and she grasps the irony of such sensually communal music: that its mastery requires restlessness and endless perfectionism, a combination that serves as the ideal breeding ground for solitude.