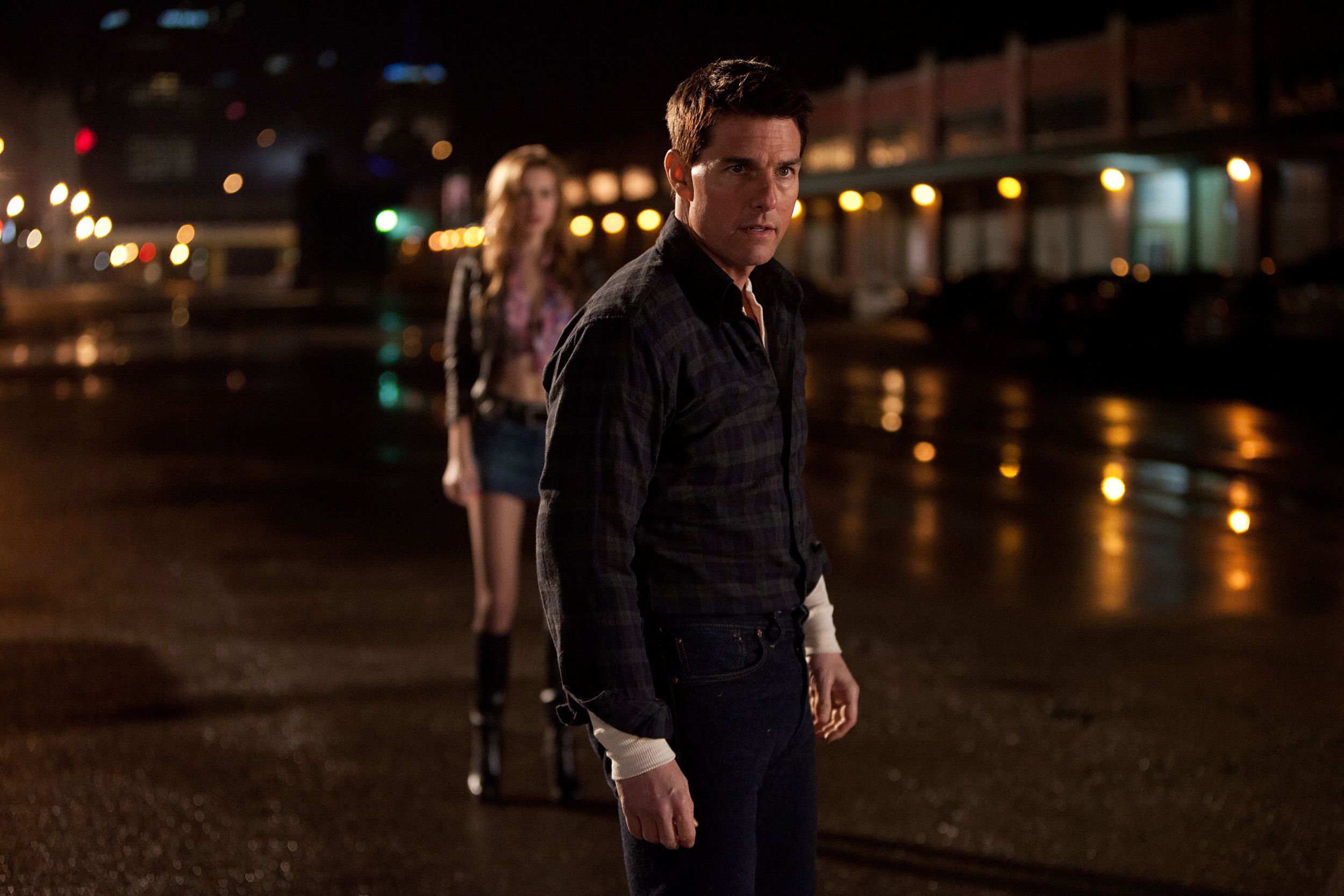 Christopher McQuarrie’s Jack Reacher adapted thriller writer Lee Child’s eponymous hero for the screen with an admirable level of restraint. The 2012 film didn’t reveal anything more about the character than anyone needed to know, and Reacher’s sleuthing to find the truth behind an ostensibly open-and-shut case never strayed too far from his entertaining ability to kick ass at the drop of a hat. Edward Zwick takes the helm for the sequel, amusingly (and portentously) subtitled Never Go Back, and though it continues its predecessor’s focus on Reacher’s preternatural detective abilities, quick thinking, and brutal offense, the film lacks for McQuarrie’s keen sense of function. Where once we were spared knowing more than we needed, now every piece of exposition and twist is belabored without end.

After a promising cold open that finds Reacher (Tom Cruise) having dispatched some thugs in a small Texas town as a preamble to luring and arresting the local sheriff for kidnapping undocumented immigrants, the film quickly gets bogged down in dialogue. It’s not unreasonable for a belated sequel to a solid but unremarkable box-office success to feel the need to reintroduce its protagonist, but you’d be forgiven for thinking this was Reacher’s first on-screen appearance considering just how much of his backstory is reiterated. Having received assistance from a military police unit in the bust, Reacher calls to say thanks to commanding officer Major Susan Turner (Cobie Smulders), who promptly says things like “You’re a legend around these parts” before alluding to various tall tales and stranger-than-fiction truths. Asked why he, himself a former military police c.o., gave up his post, Reacher offers the stilted response, “I woke up one morning and my uniform didn’t fit.”

From this thick web of perfunctory detail emerges a proper plot: Turner being framed for espionage and Reacher determining to break her out of military jail and clear her name. In short order, Reacher learns that Turner has run afoul of a private military contractor, Parasource, by probing its suspicious ability to pay off debts despite the company’s public loss reports. To the film’s credit, it remains consistent in its depiction of mercenary influence as insidious, a sharp contrast to its predecessor softening its critique of military cover-ups by ultimately making a Russian gang the true bad guys. Parasource is represented here not by its corporate leadership, but by its hired fixers, the leader of whom (Patrick Heusinger) gleefully kills anyone who might compromise his employers, including people on the company payroll.

Reacher and Turner’s investigation quickly loses steam, however, when Reacher is saddled with the task of protecting a teenage girl, Samantha (Danika Yarosh), who may or may not be his daughter. Sam comes from a long line of action-movie third wheels, as she’s reckless and defiantly stupid in the face of certain death, and prone to such amateur errors as using traceable credit cards simply to order room service. Like many other such characters, she’s only just competent and resourceful enough to give the illusion of necessity to the plot, though all of the attempts to use her mistakes and vulnerability to ratchet up tension only detract from what might otherwise have been a streamlined thriller. To give Reacher a personal connection to a case so soon after the first film immediately negates the listless drifting and idiosyncratic moral code that has only just been established.

The Jack Reacher franchise is beginning to suggest NCIS remade on the big screen, repeating the same basic beats of military police procedural with just enough variation to give the illusion that the plot of the series has evolved. The western iconography of Reacher as the wandering hero nominally renders the story in cinematic terms, but the visual blandness of Zwick’s style and the simplistic, easily solved case is better suited for television. For a film that foregrounds a critique of the military-industrial complex, Never Go Back is calculated to cause as little offense as possible, but that only makes its commentary as toothless and forgettable as its mystery.