Joachim Trier’s Thelma, which had its North American premiere at the Toronto International Film Festival two months ago, has been called indescribable. It’s certainly an enigmatic mix of horror, drama, and comedy, but it’s unmistakable that the Norwegian filmmaker’s fourth feature is also his most ambitious and personal to date. The film, which has earned comparisons to Brian De Palma’s Carrie and Carl Theodor Dreyer’s Day of Wrath, concerns a repressed young woman (Eili Harboe) who discovers love in tandem with special powers that allow her to shape the world around her with her mind. At once conceptual and precise, expansive and claustrophobic, Thelma is very much the work of a filmmaker obsessed with the vicissitudes that darken the lives of the young people who are often at the center of his work.

In Toronto earlier this year, Trier sat down with me to discuss the challenges he sets up for himself as a filmmaker with each new project, his approach to directing actors, and the fundamental structure of the world around us.

What keeps you going as a filmmaker so early in your career when you take on a new project such as this one?

There has to be a strong formal challenge, something that I want to achieve. It can be a way of editing—scenes that would just be beautiful to execute, visual potential, concept. Then I need to make space for allegory. What does it mean if we make a film about someone who’s lost control over her own body? How to talk about it in the context of superstition, magic, and reality? These things are the dynamic I was looking for. These are the specific components that have to be expressed through the visuals. We need things that are cinematic.

There are scenes in Thelma that come to mind that are extremely cinematic, in part because they are spectacular in theme.

Yes, scenes that involve some kind of fear, and I tried to create a story out of them. I’m used to working like that. Reprise is full of concept scenes, about two competitive young guys imagining the future. In Oslo, August 31st, the main character sits in a café listening to people. And in Louder than Bombs, the little brother is listening to a girl reading in a classroom and suddenly her voice becomes his voiceover, and the journey into his thoughts about his mother’s death begin. I’m used to such concept scenes. Let’s be like Hitchcock and do a suspense scene inside of an opera house! Then you only have to take the pieces and link them together to make the story. I usually begin from the outside, from asking the question: What’s a good idea for a scene?

How does practicality figure into your process? Did you have ideas for this film that for some reason didn’t work? Did you have to compromise at all?

One of my teachers from film school said that many times: “Art is the form of compromise.” You never get exactly what you need but art is like martial arts, you can’t plan everything and you have to be flexible. You have to continually be here and now, react as fast as you can. If there’s a better solution, even if you were attached to the previous idea, attack it and don’t be afraid.

You seem quite confident about the things you want to achieve in your projects. Did that come with experience or were you always like that?

I’ve always been like that at the core, but of course some of it came with experience. If I have one talent it’s that I’m sensitive to mood. I was brought up in a big, artistic family where everyone was an individual and had their own say in everything. I knew where everyone was emotionally. I was the big brother of the family. I think that quality helped me as a director, as I have the ability to immediately recognize the mood of the group and help create the right atmosphere. I really care about it and am curious too.

How did you come to cast Eili Harboe and Okay Kaya in the film?

I was aware of Eili Harboe because she’s been in other films, some quite popular in Norway. I generally find casting really unbearable until I find the right person. Then you know it was all worth it. Eili is a great example. In this film, she’s the perfect combination of brave and vulnerable. I was amazed to see her do all the underwater stunts. She went through a very difficult and demanding seizure therapy, which helps people suffering from post-traumatic stress disorder to cope with trauma. She did this to understand how to do these self-induced cramps that she performs on screen. I set it all up and supported her to do that, but she did it all by herself. Also, I care about close-ups very much and she’s perfect in close-up. She’ll be a star, I’m telling you!

As for Okay Kaya, she’s a singer-songwriter, half-American, half-Norwegian. There’s this one scene in the film, a rejection scene at the party. During the casting we wanted girls to act that particular scene. The first time we tried with Kaya it went okay, but it wasn’t enough. Then I just asked her if she knew how it is to feel rejected. Then we tried again. And then halfway through the scene she started crying. I said “cut” and she apologized for getting so emotional. I just told her that this was it, that the emotions are out and we’re making a film for real! Then we started rehearsals. That girl is so pure and honest. She can’t lie about anything. And that’s what I wanted.

How would you describe your approach to directing actors?

I have to admit that I’m very pragmatic about each and every shoot. I spend a lot of time beforehand, not just rehearsing, but trying different options, alternative solutions. I like to see the bigger picture. That’s my way of directing: I sometimes see things behind the scenes, but generally my role on set is to be supportive. I also try to figure out what the real situation is, not what we pretend the real situation is. Also, when you cast certain people for certain roles, you need to have time to test communication, if that’s at all possible to discuss your ideas with the people you’ve chosen to work with. That’s extremely important. It’s not only for me, but for the whole crew.

Was there a special meaning behind including snakes in the film?

It originated with reading fairy tales and stories about witches. But I just like snakes. They’re beautiful and dangerous at the same time. I also read a lot of Japanese comic books that use them as symbols. People come up to me and tell me the snake is a religious symbol, that it represents temptation and guilt. Yes, it’s also that, but that wasn’t my intention.

And you know the critics will probably tell you it’s that.

And that’s fine, because they wouldn’t be wrong! [laughs] When you work with certain material, you work it through your own filters. I was once invited to speak at the Swedish Film Institute and I came a little early to listen to someone speak about filming kindergarteners. They discovered that if you asked a child to tell a story in front of the camera, they didn’t know what to do. But when you asked them what they wanted to show people, then they started showing the world as it is to them. And I think that’s what cinema is all about: showing you things. I want to show you these things, the snakes, the girls that are struggling with love, the Hitchcockian opera house. That’s being a director to me. It’s not about a division between the intellectual and the emotional. It’s more about how you use your gaze.

Are you more of a participant in action or more of a voyeur then?

I ask myself that question all the time. I hope I’m an important part in people’s lives. On the other hand, I know in some situations I’ve kept my distance and been a spectator before anything else. But it’s like that in all sorts of situations: in love, in relationships, in work too.

Location is another protagonist of Thelma’s story. One can get quite overwhelmed sometimes by the vastness of space, the water, or the forest.

I have to come back to the “showing” part again. It means everything. Also, particularly in that context, it’s important to know that we’ve used anamorphic lenses. It creates the feeling of space, the particular dynamic between the foreground and the background. With that, I wanted to present the special relationship between the vastness of space, icy waters, agoraphobia, the idea of an open space as opposed to claustrophobia, close-ups, being locked up in a room without knowing who’s looking at me and where I am. In my previous work, particularly in Reprise and Oslo, we were showing more bourgeois parts of towns, parks, the west side of the city. Now I show universities, the kind of 1970s, functional, brutalist structures, located in the eastern part of Oslo which look very Ballardian: big blocks of concrete flats.

What about structure and order then?

As a person it’s the most important. Only if I have everything planned can I really feel free. If we’ve practiced everything beforehand, we’re the most free to improvise, as paradoxical as that may sound. We all know what’s the aim. The film is about that too. It’s about allowing chaos in a very structured, orderly life. I know many people struggle with that balance. We all want control, want to know our destiny, want to know who we are or when we die, but in reality we’re just in the middle of some ancient chaos.

Review: Joachim Trier’s The Worst Person in the World on Criterion Blu-ray

The Worst Person in the World Review: A Euphoric Rom-Com Restoration Project 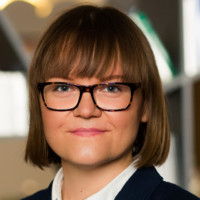 Magdalena Maksimiuk is a film journalist who works for Polish and American media outlets. Currently, she works as the press officer of the Warsaw Film Festival. She loves to wander around big cities and visit London theatres.

Review: Murder on the Orient Express