Ant Timpson is best known for his work as a producer of horror films, most notably the The ABCs of Death series. But if fortune favors the brave, then Timpson is poised to be recognized as a different kind of visionary for his first directorial feature, the anarchically constructed Come to Daddy, which made its world premiere at the Tribeca Film Festival a few days ago. In the film, thirtysomething Norval (Elijah Wood) arrives at a secluded coastal home—which one character likens to a UFO from the ’60s—to reconnect with his father. However, his dad (Stephen McHattie) consistently humiliates him, making Norval anxious to walk out on him, just as the old man walked out on Norval 30 years ago.

Of course, Come to Daddy has a few surprises in store for Norval and his father, as well as audiences. As Norval, Wood displays the same gusto for the gonzo that he’s brought to a recent string of action- and horror-driven genre films, most notably Wayne Kramer’s underseen Pawn Shop Chronicles and Franck Khalfoun’s Maniac remake. And the actor is well-matched by McHattie, who brings to his role that same sense of snaky power that has defined some of his best work. While it’s almost a spoiler to say that Timpson’s film isn’t a two-hander, it’s best left to audiences to see how things play out between Norval and his pops.

In a conversation following Come to Daddy’s world premiere, Timpson, Wood, and McHattie discussed the father-son relationship at the heart of the film.

Ant, I’m curious to know about your relationship with your father?

Timpson: This whole film came about from the passing of my dad. I was there in front of him when he died. It was kind of traumatic. His partner thought it would be great to have a grieving process with his embalmed corpse in a coffin near us for a week. I wasn’t working on anything at the time, so I ended up spending a lot of time alone with him in the house all night. I was sleeping in his bed, wearing his pajamas, going down to look at him at night and thinking of unresolved things I should have said to him in life that I didn’t. During the rest of the week, people came and paid their respects, and they were telling stories I had never heard. I thought that was unusual, and wondered if I really knew everything about this man.

It was a beautiful, cathartic experience, but also, the way that my mind works, it started going to strange places. Suddenly life felt really short [laughs]. I thought that I need to fucking do what I should have been doing for the last 25 years, which is to go back to directing. This felt like the biggest kick in my ass of all time. But I had no script and I didn’t want to look around at shit. As a producer, I’m inundated with scripts. So why don’t I use this experience to come up with something? So, it became a tribute to my dad to make this film that we would have watched together when I was younger. We both loved British thrillers, character-based gritty dramas with a really dark sense of humor interlaced in them, chamber pieces like Sleuth.

I wrote to Toby Harvard and said that I had an idea based on what I had just gone through. I really want to make something, and I said that I was going to find the money and shoot it—maybe in the house where we were before it gets sold. He said that wasn’t a film I could find in my bank account [Elijah cackles], but that the idea is crazy good, so we kept going—coming up with amazing ways to keep it surprising. And it just evolved from there. Eventually, it got to a shape where I wanted to send it out and Elijah read it and soon we were off and running.

What about casting Stephen?

Timpson: I’ve been a lifelong fan of Stephens’s work. I’ve always found him super compelling on screen. He doesn’t need to say a word for me to emote. Those piercing eyes!

Stephen, what about your relationship with your father?

Stephen McHattie: My dad was blind and a miner. He lived way out in the country in Nova Scotia. He used to carry me on his shoulders to watch movies. He loved movies. I had no idea he was blind until I was six years old. We’d talk about the movies. I thought he could see them.

Timpson: So, you were his eyes?

McHattie: No! I thought he was watching them!

Timspon: But as a kid did you ever…communicate, if you can remember…

McHattie: Yeah, we would talk about the films.

Timpson: That is so cool.

McHattie: I was young, very young, and we would talk in a very elementary way. He would talk about what he enjoyed in them, so I was absolutely convinced he was watching them. Man, it was a shock to me when I realized he was blind.

So, Elijah, how are you going to top that?

Wood: I can’t top that. Yeah, I can’t top that! My parents were…I’m a product of divorce, which wasn’t uncommon. They divorced when I was 15. So, I was essentially estranged from my father for almost 20 years, a little bit over 20 years. I reconnected with him in my 30s.

Wood: [laughs] That’s kind of funny. Except I obviously knew my dad and extended family as well. It wasn’t quite the reunion that Norval experiences with his father.

There are some, let’s say, unsettling moments in the film. I like the deadpan tone. For one, the surreal situations are treated almost as perfectly ordinary. Could you speak to how you handle odd, uncomfortable, or strange moments in life?

McHattie: You try to figure it out, which is kind of the situation my character is in in the movie—trying to add things up and stay a little ahead of the game, but every situation is kind of a game if you look at it that way.

Wood: I think I take stuff at face value.

Timpson: Oh man, I’m like a moth to a flame.

Wood: You really are, actually! Your stories are crazy!

Timpson: I’m like a voyeur. Life is full of the mundane, so when anything strange happens, I’m going to soak it up and absorb it. Otherwise, you’re walking through a banal haze.

Timpson: Not that I want to be directly involved in it—I’m not that brave—but I want to take it all in and I’ll process it later, and it will pop up somewhere else down the line.

Wood: You’ve had a series of extraordinary things happen to you.

Timpson: When I tell crazy stories about stuff that happens in my life and people say, “That’s really unusual,” but I think it’s normal.

Wood: Right. Weird is so subjective. It’s different. When it’s something happening to you, it may not seem as odd.

Timpson: And I amplify stuff…

Wood: …in the telling of the story?

Timpson: Yeah, I like telling stories. Otherwise, it’s like, “I went and bought a glass of Coke and sat down.” You’ve got to give the audience something! [Wood laughs]

For Stephen and Elijah, how did you calibrate your performances? I love the tensions that play out between your characters. What observations do you have about the transformations both of your characters go through—because they are extreme.

McHattie: He’s got a [fog] he has to get through to get to the “What is going on here?”

Timpson: Yeah, you do that so well. He’s asking you, demanding stuff from you and you’re like, “Oh man, I haven’t got it!”

Wood: He looks so hungover, it’s so painful! But there’s an internal thing happening with each character that the other character isn’t aware of. Norval has this whole life he’s coming from that his dad doesn’t know about. Norval has expectations of him and he has a whole secret life that Norval isn’t aware of. So, it’s what’s happening in between based on these two people’s own internal life that’s the kind of the kinetic meat. That dynamic is established because these two people are existing in their own spheres, wanting something from the other—or not.

Yes, the phone call for example. Both of your characters guzzle wine hungrily. They also lie on occasion. On what occasions do you lie? Or do you lie to protect yourself?

Wood: I can’t lie. I find lying impossible and really difficult for me. It was drilled into me from a young age, or maybe it was just in the fabric I was born with, but it’s very hard for me to be dishonest.

Did something happen as a child?

Wood: No, it was never [anything in particular]. I never used it to manipulate or try to get something. That’s fine. Everyone is figuring out as a kid what their boundaries are, and what they’re capable of, and what they can get away with. And certainly, everyone goes through it. For me, dishonesty wasn’t a part of that. I remember I ate peanuts at a supermarket, and I thought I’d stolen something. I had a complex about it. Less so now.

McHattie: When I was a kid, I had a great ability and tendency to elaborate on stories and just bullshit my way through everything. I had a brother who was about 10 years older than me, and he was a banker. My dad had died, and my mom said to my brother, “You’ve got to do something about him.” He would do a catechism with me on everything I said, calling me out on being a liar.

McHattie: I have a hard time with lying. He was a little brutal.

Ant, I want to ask about the film’s distinctive style, which is claustrophobic even in the widest spaces. How did you land on your visual approach?

Timpson: I used to talk to cinephile friends, and we used to ask first-time directors shooting film with anamorphic lenses that don’t require them, “Why are you using anamorphic in a haunted house? Get out of here! Where’s the claustrophobia in that?” But I wanted the character to feel isolated in the frame more than anything and I felt if we were boxed, it wouldn’t be as impressive a canvas in terms of really making them feel as small and as insignificant as possible. It gives you different things to play with, and in a film where you shift gears, it’s nice to have those framing things that hint at what might be coming. I found it freeing.

Wood: You can be very claustrophobic with anamorphic. Look at John Carpenter’s The Thing. There’s isolation in those wide frames. You put something small in those frames and they feel more isolated and alone.

The characters make some foolish or perhaps bad decisions. What are your thoughts about regrets, or bad ideas or decisions you’ve made?

Wood: I don’t know if I have any regrets. We are a combination of all of our life experiences in the present and I wouldn’t take away the choices, right or wrong that I’ve made, because I’m happy with who I am and where I am now. It’s all part of the fabric of who we are. We are the combination of those choices.

McHattie: Regrets? I’ve had a few, but then again, too few to mention. I don’t have any regrets, except…actually, no.

Review: Come to Daddy Invests a Familiar Scenario with a Crazed Energy

Review: Born to Be Blue 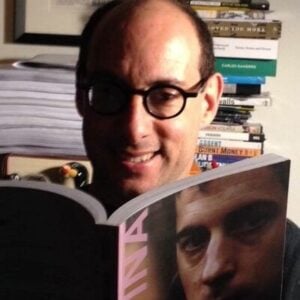 Gary M. Kramer is a writer and film critic based in Philadelphia.