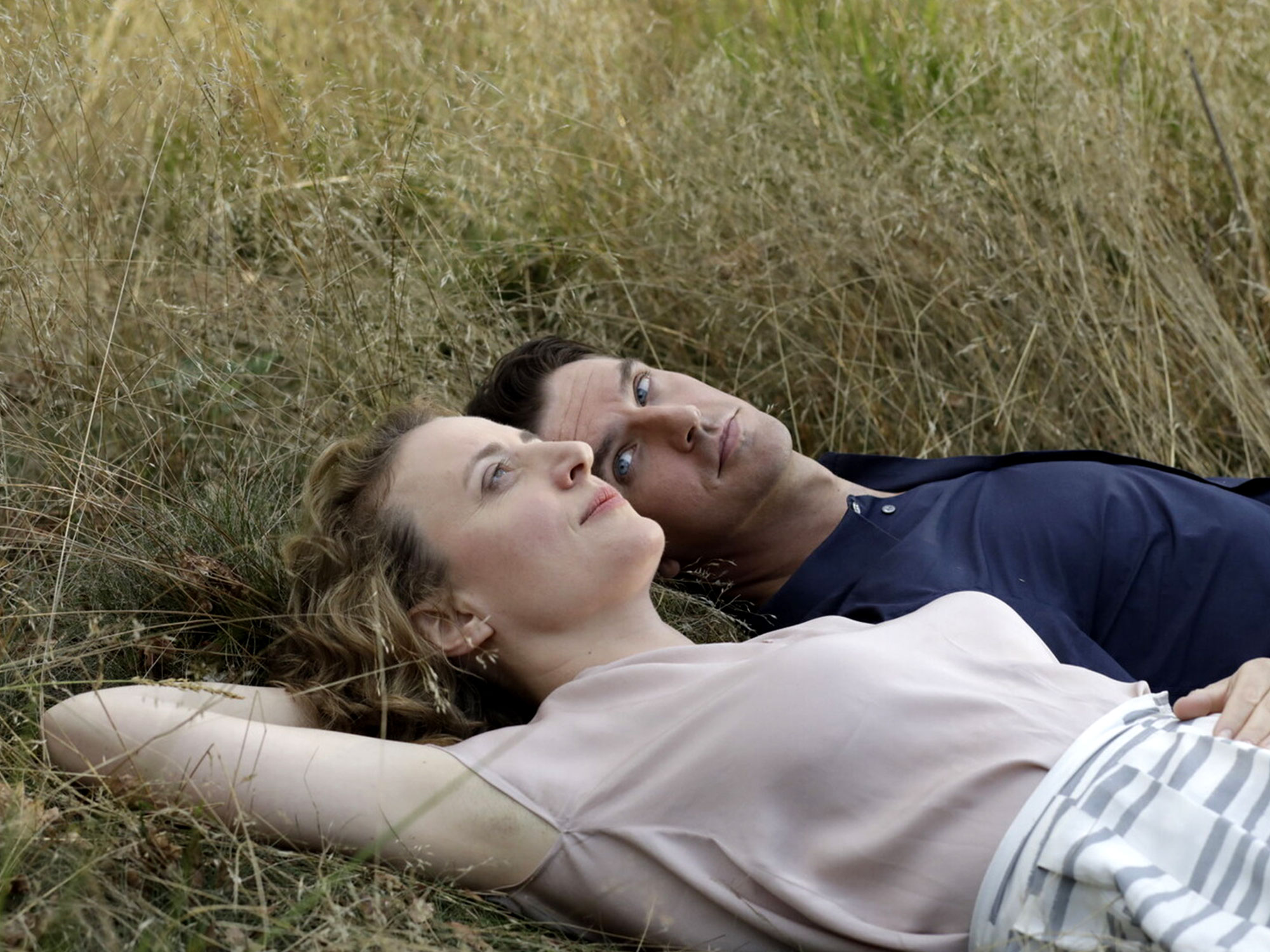 Based on a short story by Emma Braslavsky and set in a near-future Germany where technology has just realized the dubious dream of romantic relationships between people and robots, director Maria Schrader’s I’m Your Man puts the Turing test into cine-practice. Maren Eggert stars as the skeptical Alma, an expert in cuneiform who agrees to test out one of these “humanoid robots,” Tom (Dan Stevens), for three weeks in order to secure funding for her passion project, aiming to prove that ancient Sumerian texts, previously thought to be purely administrative, contain the rudiments of poetry.

Given its similar premise, Her would seem like an inevitable comparison, but I’m Your Man takes a surprising tack that places it in closer company with Do Androids Dream of Electric Sheep. If Schrader opts for the sunny tone of a romcom, this in no way hampers the film’s philosophical fixations. Tom is designed above all to be Alma’s dream partner, adapting to her desires algorithmically, and the scope of his intelligence remains ambiguous, leading Alma—and by extension the viewer—to rethink her assumptions about what it means to be human.

Tom’s algorithmic innerworkings are brought into stark relief in an early scene where Alma, not trusting him alone in her apartment after he reorganizes it on a rational basis—that is, to the point of inhuman sterility—leaves him at a coffee shop before heading off to work. Tom orders a mochaccino and asks the barista, “Between the two of us, would you have guessed that I can’t actually want anything?” Later, he’s seated absolutely motionless at a table when the woman next to him complains about a pair of teens noisily watching epic fail videos. Tom asks her what’s funny about these “short clips showing footage of people failing to implement a plan,” but she can’t really explain it. There follows a sequence of such clips, presumably playing in Tom’s head since he’s connected to the internet, backed by an ever-so-slightly melancholy piano tune which lends the pixelated images an unexpected pathos.

This tonal rupture with what has come before imbues the sequence with a powerful resonance. Not only does it suggest that part of what defines humanness is the propensity for clumsiness and failure, it equates the online algorithms that recommend content on the basis of “likes” with the mechanism of Tom’s intelligence. His sole function, after all, is to please Alma (a function she sees through immediately and resents) at the expense of any desires of his own. Furthermore, it suggests a lineage for the epic fail phenomenon going back to the silent slapstick of Buster Keaton or Jacques Tati, offering an insight into Stevens’s acting style. His rendering of Tom’s too-fluid gestures recalls the ineffably graceful artifice cultivated by silent film actors, which is very much at odds with the naturalistic trend in acting that has dominated since, and which Eggert adopts for Alma as a foil to Tom.

Though Alma initially resists Tom’s attempts to relate to her as a proxy of human agency and desire, prompting her colleague (Falilou Seck) to wonder if he doesn’t know her better than she knows herself, she sees him in a new light after her ex, Julian (Hans Löw), drops by her apartment to retrieve a photograph. Next to Julian, Tom is effortlessly graceful and attentive, arousing his jealousy. Almost in spite of herself, Alma begins to appreciate Tom’s failure to simulate human failure as a personality flaw that makes him seem, paradoxically, more human, as his comedic inability to fulfill his function to make her happy makes her happy.

I’m Your Man’s disarming romcom sensibilities are an unlikely yet fitting vehicle for Schrader’s timely ruminations on AI. If Alma’s study of cuneiform seems like a throwaway subplot, it ends up having a great deal of thematic implication. Like the 3D scans of the tablets that Alma translates, searching for metaphor among lists of agricultural products, Tom’s personality (or lack thereof) is a matter of interpretation, of relation. She may be reading poetry into a text, or humanity into Tom’s algorithmic processes, but if poetry and humanity are not in the eye of the beholder, where else do we look to find them, what other measure do we have? Through Schrader’s camera, our humanity comes into focus as a compromise, shaky at best, between the mathematics of instinct and the absurdities of consciousness, a tragicomic state of unhappiness in perpetual pursuit of a happiness that it can never fully realize.

Review: The Year of the Everlasting Storm Eligizes a World in Suspended Animation