Cautious optimism is the guiding principle of this year’s International Film Festival Rotterdam, which has opted, like other festivals since the start of the Covid-19 pandemic, for a “hybrid” model. As the film industry at large continues to fret over its survival, this festival known for its focus on cutting-edge media art has slotted into its program a number of films conspicuously concerned with our digital lives and people trying to survive in a fractured world. Perhaps inevitably, their ruminations on the challenges faced by physical communities and the very need for physical spaces will feel especially resonant to those watching these films from the (dis)comfort of their homes.

James Vaughan’s feature-length directorial debut, Friends and Strangers, is a highlight of the festival’s Tiger Competition. The film begins as a fairly well-worn tale of millennial angst, with a pair of Sydney-sider acquaintances, Ray (Fergus Wilson) and Alice (Emma Diaz), agreeing to camp together on their way back from a trip to Brisbane. Whatever potential for romance drew them to a shared tent in a beautiful patch of nature is scuppered when a few awkward conversations with locals make them realize that they have very little in common. While Ray hopes for a quick rebound after being recently dumped, Alice can’t even muster a smile as she takes a dozen selfies in the woods. If would seem that, mentally, they’re still stuck in Sydney, but home doesn’t exactly suggest a kind of Eden, given how they’re thrown into chaos when, upon their return, the metropolis is revealed to be a den of miscommunication.

The film’s Sydney is all popping colors and steely surfaces, with cinematographer Dimitri Zaunders skillfully homing in on its labyrinthine streets (he’s also attuned to the still heat of Australia’s east coast). This literalizes the impression of Ray and Alice struggling to navigate an internal maze of manners. Across a set of encounters between upper middle-class people, relationships become increasingly fleeting and mutual understanding more elusive (shades of Hong Sang-soo). As a generic Aussie bloke, Ray is read by everyone he meets as a schmuck, and his painful earnestness and eagerness not to offend results in quite the opposite.

The characters here always seem to know each other’s gossip, and they all seem to live most fully in the world of social media. There’s no greater transgression in the world of Vaughn’s film than going cell-free, as not calling ahead or filling each other in on their movements constantly gets someone in trouble. In a vignette where a battle of attrition between warring neighbors is effectively won by someone who owns the biggest, most obnoxious sound system, we see how waves of technology place barriers between people, and how for these well-to-do characters, their joie de vivre is derived from causing drama.

Pop music and tech culture has caused invisible barriers to insulate people in Queena Li’s Bipolar. Chinese singer-songwriter Leah Dou, daughter of musicians Dou Wei and Faye Wong, plays a Gen-Z singer who, in a spin on the Orpheus tale, is attempting to return a rainbow lobster to the sea. We’re given little backstory about Dou’s protagonist, whose name even eludes us. Throughout, flashbacks make the most of the actress’s rock-star cool, with wide-angle shots that sweep up and down bodies, zipping across clubs and staircases, as if trying to explain away her character’s past life as a blur of hedonism. As she steals the lobster from the restaurant of a Tibetan hotel, convinced of its magical properties, and travels to its supposed resting place at Ming Island, meetings with others seem of little value to her.

The film, as she encounters an assortment of colorful characters, suggests its floating in and out of dreams. Sometimes she moves unnoticed through sequences as though a ghost, and as she crosses Tibet, she becomes increasingly alienated from her own self; everything from her outlook on the future to her gender expression to responses to the behavior of men is constantly shifting. Li’s filmmaking is beautifully moody, as in her use of color to show the main character’s soul opening up (weaved into the monochrome frame, beams of purple, red, and blue crawl from the skyline like tendrils), but it’s hard to shake that it’s not only been influenced by the work of Terrence Malick, Federico Fellini, even Abel Ferrara, but that it’s pitching itself to the tastes of festival audiences. Despite the main character’s desperation to return to a kind of primal state, the digital, hyper-real landscape of the film feels unintentionally at odds with that quest, that Li’s imagined poetry, the stuff of the modern world, is something that Dou’s character must overcome in order to find something “real.”

The influence of more than a few giants of Western cinema is present, too, in King Kar, which envisions Bolsonaro’s Brazil, namely the city of Caruaru, as a corporate-friendly dystopia, where technology will make empty promises about environmental well-being. At the center of Renata Pinheiro’s sci-fi film, a kind of riff on Stephen King’s Christine, is a young street urchin, Uno (Luciano Pedro Jr.), who can communicate with cars. With the help of his uncle (Matheus Nachtergaele, in an extraordinarily physical performance), they fix up old cars that have been banned in Brazil, retooling the write-offs as the ultimate smart cars. And at the center of the film is the “king car” taxi that Uno was born in, whose malevolent aura is accentuated by its power of speech. Tongue as silver as Audrey II, it not only manipulates others to kickstart a populist revolution against capitalism, it also steals the uncle’s girl (Jules Elting).

King Car takes her to a make-out point overlooking the city and she dances for it before straddling its roof. The scene de-centers pleasure away from her and onto the object, by showing her gyrating in double vision, and in the moment it seems as if we’re seeing through the machine’s eyes. An oddball vision for sure, King Car is also crass, particularly as it gets into a subplot about a city being regenerated through people’s renewed interest in nature, in a gesture toward green new deal politics that amounts to empty window dressing. The lure of the automobile as a sexual object also seems quaint when you consider that Ridley Scott had Cameron Diaz ride a bonnet in The Counselor, and that David Cronenberg, with Crash, made the definitive statement on the relationship between the cold machine and the warm body without landing as hard as Pinheiro does here into exploitation-leaning themes.

By contrast, Yoshida Kota’s Sexual Drive is an anthology film that explores sexual fetish (of the culinary kind) without showing physical intimacy. One sequence of tofu being prepared is literally shot like a porno, with guitars comically shredding on the soundtrack and close-ups between panting faces watching a sizzling wok. “It’s ready,” grins the chef. It isn’t only food that forces the characters into submission. In one segment, a businessman receives an anonymous phone call, taunting him for, among other things, his mistress’s poorly kept Instagram page. Sitting at the bar of a restaurant where silence is mandatory, his airpods act as a vessel for the devilish voice in his head. The entire system of aspirational lifestyle goods has brought the characters in Sexual Drive to this point. In its close-ups on ordinary objects like shoes and seatbelts, shot with the same carnal expectancy as the food, it reappropriates sexual dynamics for a locked-down culture that sees the same domestic objects day in, day out.

Review: King Car Has a Multi-Layered Political Allegory Under Its Shlocky Hood 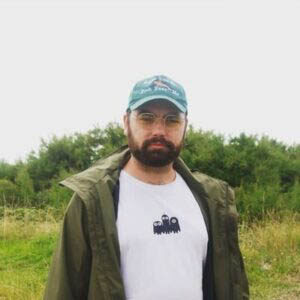 Ben is a critic and programmer based in London. His writing has appeared in Cinema Year Zero, We Love Cinema, and Vague Visages.