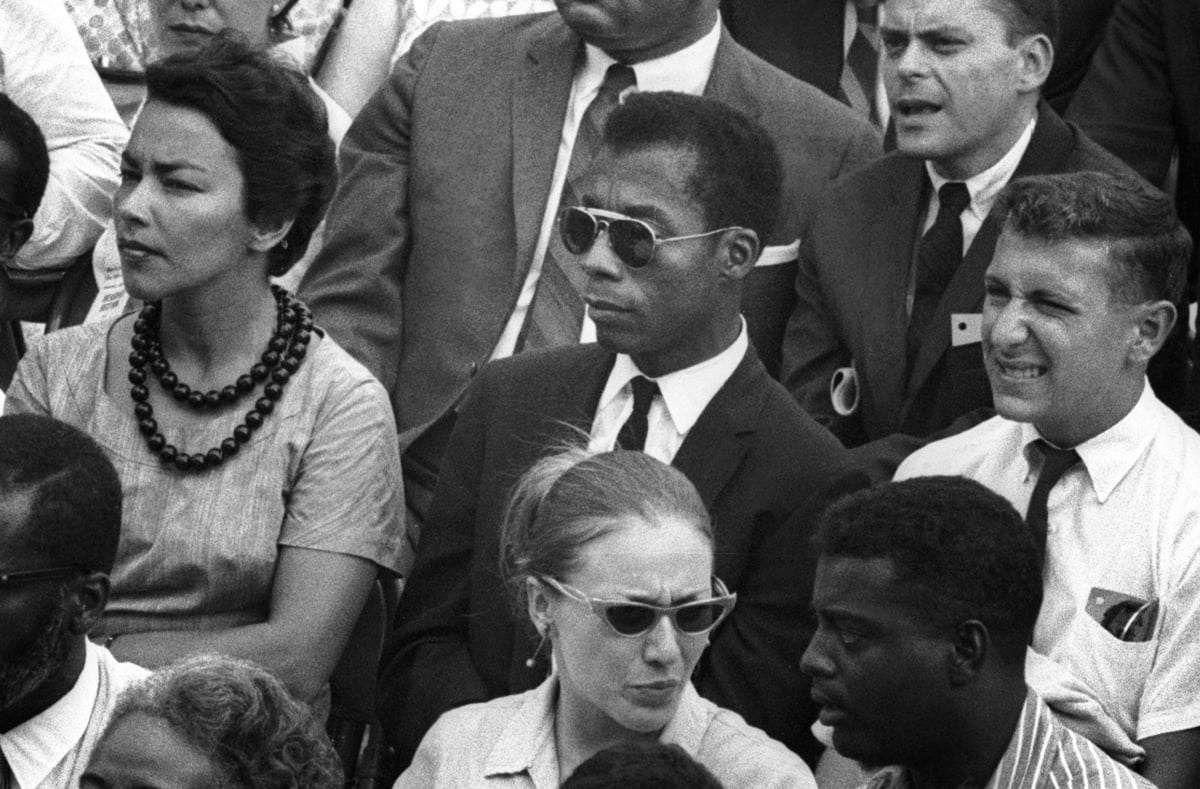 Author James Baldwin’s testament to race-based inequality and misunderstood cultural history forms a searing lens of incontrovertible clarity in I Am Not Your Negro. The documentary takes as its guiding premise that the United States’s endemic racism toward African-Americans stems from laws and forms of governance made predominately by white men who unconsciously hate themselves. Director Raoul Peck structures the plot around 30 pages of notes Baldwin made while planning a book based on his own recollections of Medgar Evers, Malcolm X, and Martin Luther King Jr.—all of whom were assassinated between 1963 and 1968. Samuel L. Jackson reads Baldwin’s words in voiceover, deepening his voice into an elegiac monotone that compliments still images and footage from multiple eras. That includes flashes from the 2014 uprisings in Ferguson, Missouri, though the film takes the 1960s, when Baldwin was a public intellectual making appearances on such popular programs as The Dick Cavett Show, as its central focus.

Baldwin’s substantial words function as an entry point for Peck’s digging into the depths of the racial oppression that rises up not only in political debates and judicial matters, but in pop culture as well. In fact, the bulk of I Am Not Your Negro unfolds within the realm of the public’s eye and away from the halls of universities in the ivory tower. If Ava DuVernay’s riveting 13th, which is also about the systemic oppression of black people, has a weakness, it’s that the film’s preponderance of information comes from the mouths of experts, albeit with a few notable exceptions. Peck deviates from the conventional tool of the talking head altogether by constructing a parsimonious highlight reel of details that, in toto, depicts the U.S. as a collective cultural monster of fundamental self-delusion and ungoverned paranoia.

Peck peppers additional footage from one of Baldwin’s guest spots on The Dick Cavett Show throughout the film as a reiteration of how the political instantaneously becomes personal when racial discrimination is the topic of conversation. No political party is categorically absolved of historical guilt when confronting segregation and black equality, though it’s plainly evident that the left’s misdeeds are largely matters of rhetoric whereas the right’s resounding weapon of choice is violence, or at least the threat of it. Archival images of neo-Nazis wielding signs promoting white power are buttressed against footage of Bobby Kennedy promoting the possibility of a black president “within the next 40 years.” For Baldwin, who perhaps takes a page from Malcolm X on this point, the supposed hope in Kennedy’s statement is but further reinforcement of an unstated privilege and power that requires a black man to be extraordinarily qualified for a position regularly assumed by white men who are the beneficiaries of nepotism and corruption.

One of Baldwin’s most caustic critiques is of certain Hollywood productions for their “grotesque appeals to innocence,” as Baldwin puts it, in which a recognizable reality is replaced by a fantasized version of agreeable social interaction and romantic engagement. Baldwin cites films starring Gary Cooper and Doris Day as recurring culprits, and pinpoints 1957’s Love in the Afternoon and 1961’s Lover Come Back as especially typical iterations of infantilized takes on the demands of being an informed, adult citizen. These indictments extend well into Hollywood’s past with 1931’s Dance, Fools, Dance and also bleed into advertising campaigns, where black faces are regularly made to appear servile or buffoonish. While such evidence alone could suffice as cultural condemnation, Peck consistently routes the film’s admonishment through Baldwin’s personal recollections. In a particularly revealing moment, Baldwin’s words recount how he realized as a child that the slaughtered Native Americans in film westerns were versions of himself; by cheering on the cowboys, he’d been rooting for the bad guys all along.

In tone and insight, Baldwin’s notes are reminiscent of Frantz Fanon’s writings; both men grandly articulate the collective existential conditions of black people and the isolated occurrences that may steadily chip away at both day-to-day sanity and prolonged resolve. To that end, Peck’s construction bridges the often virulent hatred of the 1960s to contemporary, empty expressions of sorrow from politicians and the excessive force used by police officers from a range of notable assaults within the U.S. over the past 25 years.

The mirroring of past and present through montage recalls the opening of Spike Lee’s Malcolm X, in which footage of the Rodney King beating is intercut with a burning American flag and one of Malcolm X’s most damning speeches on the white man’s history of violence. In Lee’s film, Malcolm’s demand for justice by any means necessary is a cocktail of outrage in the face of insuperable discrimination and a personal reclamation of his own family unit, which had been stolen from him as a child through his father’s murder and his mother’s institutionalization. On the contrary, Baldwin strove for no such stability through institutions, marriage or otherwise. Never a black Muslim, a member of the Black Panthers, nor affiliated directly with the civil rights movement because of its purported hostility toward homosexuals, Baldwin understood that, as he articulates late into the film, “we are our history.” By arranging U.S. history as entirely tainted and polluted by the cancerous stench of racism, I Am Not Your Negro makes no concessions about its dissatisfaction with the whole rotten lot of so-called western democracy.