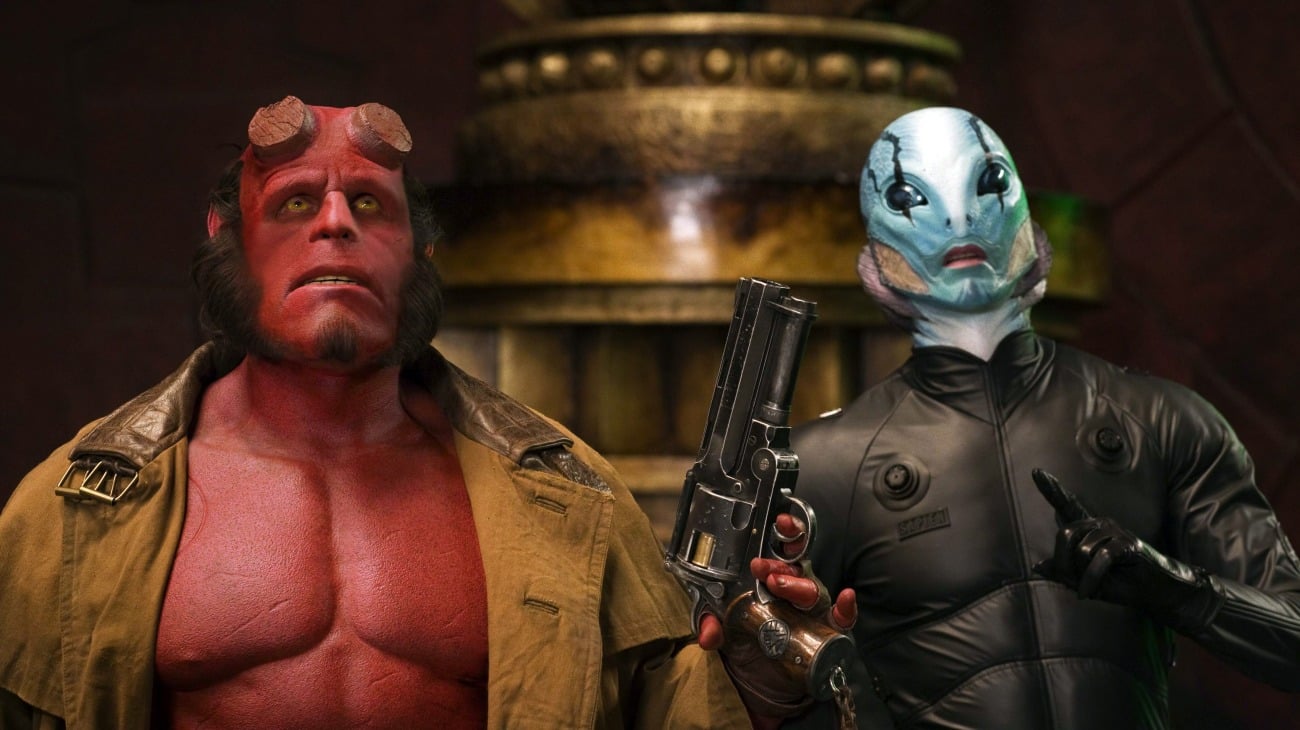 While waiting in line for the screening of Hellboy II: The Golden Army, I overhead someone say that Guillermo del Toro’s latest is being seen as his audition tape for The Hobbit. He’d already gotten the gig before Hellboy II’s release, but I imagine that the Mexican filmmaker pulled out some edited footage to show to Peter Jackson & Co. when bidding for the Tolkien prequel. Plenty of fans have already been sold on del Toro’s ability to handle a project with the style and magnitude of The Hobbit, but I’ve felt that some of his more recent endeavors have failed to live up to their potential. Blade II was a very solid upgrade for that franchise, but I was burned by both the under-developed Pan’s Labyrinth and the bogged-down first Hellboy. In Hellboy II, I was looking for a reason to believe in del Toro and, if anything, he does manage to give viewers a substantial hint of what to expect in Middle-earth.

A Golden Army of indestructible machines lies hidden and dormant, waiting for someone to awaken and command them; the Elfen Prince Nuada (Luke Goss) is just crazy enough to take on this quest, seeking to snatch any chance of power from the unworthy race of humans. Elsewhere, the main characters from Hellboy—four years removed from the events of the first film—are comfortable in their own world, but still wary of the humans outside, and it’s starting to wear on them. There’s life beyond their walls, and life beyond the Bureau for Paranormal Research and Defense, but will these creatures—these heroes—ever be allowed to pursue it?

At one point there’s a shot of Liz Sherman (Selma Blair) with a not-so-subtle banner hanging in the background that reads, “A Big Decision.” It’s true, many of these characters are faced with big decisions. Does Liz share her life-altering secret with Hellboy (Ron Perlman, who I can’t get enough of)? How much is Abe Sapien (Doug Jones) willing to sacrifice for someone that he loves? And Hellboy … well, Hellboy’s story doesn’t have the requisite “big decision,” and the filmmakers seem to realize this halfway through when they force a quandary onto his story arc. Like an over-the-shoulder devil to our endearing demon, Prince Nuada attempts to convince Hellboy that the creatures he hunts, including Nuada himself, are the last of their kind. Why rob the world of the opportunity to see these creatures and gods that are nearly extinct? This is meant to somehow build upon Hellboy and Liz’s earlier disappointment at the freakshow treatment they receive from the very people they rescue, but it’s a plot element that doesn’t really connect and is ultimately abandoned.

Hellboy II sputters at the start thanks to some extremely poor dubbing, forced jokes, and a peculiar opening sequence. The film’s storybook prelude tells the tale of the Golden Army as a bedtime story; the sequence is interesting, creative, and well-made, but I have an itching feeling that it may be in the wrong film. I’m not sure if I take issue with the child-friendly presentation of the story (a sort of stop-motion sequence with wooden puppets) as much as its content. It leans heavily toward the folklore end of things, upsetting the film’s balance. It’s tonally out of place and feels more like a demonstration of ideas for The Hobbit than an integral part of Hellboy II.

Similarly, towards the end of the film a character shows up who almost single-handedly sidetracks the entire movie for a mythological interlude. It is mildly interesting, but it jarred me to see such a heavy emphasis on lore appear out of nowhere, and it’s tonal shifts like these that hinder Hellboy II more than help it. While some of del Toro’s other films pursue mythology or science fiction exclusively, the Hellboy films are faced with the unique task of juggling folklore with fantasy with science fiction with graphic novel action. I can appreciate the difficulty of such an undertaking, but when the film strays, it shows.

Del Toro provides his viewers with a lot to chew on visually as the film whisks us from modern urban surroundings to cave bazaars to a throne room where petals drop from above in a never-ending rain (resembling an arena from a Soul Caliber game). This world is densely populated with beings so inventively designed that they command you to look closer at every salient detail. In this regard, Hellboy II draws influence from both del Toro’s own work and the work of his peers. Sources of inspiration for creatures and monsters range from the long blubbery faces and hunched necks of Star Wars creatures to the pale vampire breeds of Blade II to, of course, the trolls and goblins that populate The Lord of the Rings.

I’ve always felt that a rough patch in every Guillermo del Toro film is the execution of CGI. The effects are always just “kind of decent,” and unfortunately, “kind of decent” can take you out of a film very quickly, even if only for a moment. Yet in Hellboy II, it isn’t until the final sequence that the CG becomes noticeable, and what I noticed in that moment was that I hadn’t been noticing it. For the most part, I couldn’t discern when Hellboy II’s creatures were men in suits and when they were computer-generated. It felt like a big step forward not only for this particular filmmaker, but for the technology as well, and I feel almost happy for del Toro that he pulls off visual strokes here that he’s always attempted but hardly ever attained.

A more significant lesson learned between the two films has to do with their villains: this time around, they actually have personality. While in the first film, del Toro struggled to make even the main baddie remotely interesting, Hellboy II is rich with interesting creatures, minions, and evil-doers. And it’s not restricted to the bad guys alone; even the heroes are more interesting, all the boring characters weeded out. With Hellboy II, del Toro has gotten much closer to creating what I’ve always craved from him: a fully-realized world. The universe of the first Hellboy seemed too bland, and while Blade II did an honorable job with its mythos, the world of Pan’s Labyrinth’s was paper-thin. But once again, I see del Toro’s success with Hellboy II as a stepping stone leading to The Hobbit, where rich and fleshed-out worlds are imperative and essential. And that’s what we’re all looking forward to, isn’t it?

Jonathan Pacheco is a current web developer and future freelance writer. He blogs and reviews films at Bohemian Cinema.