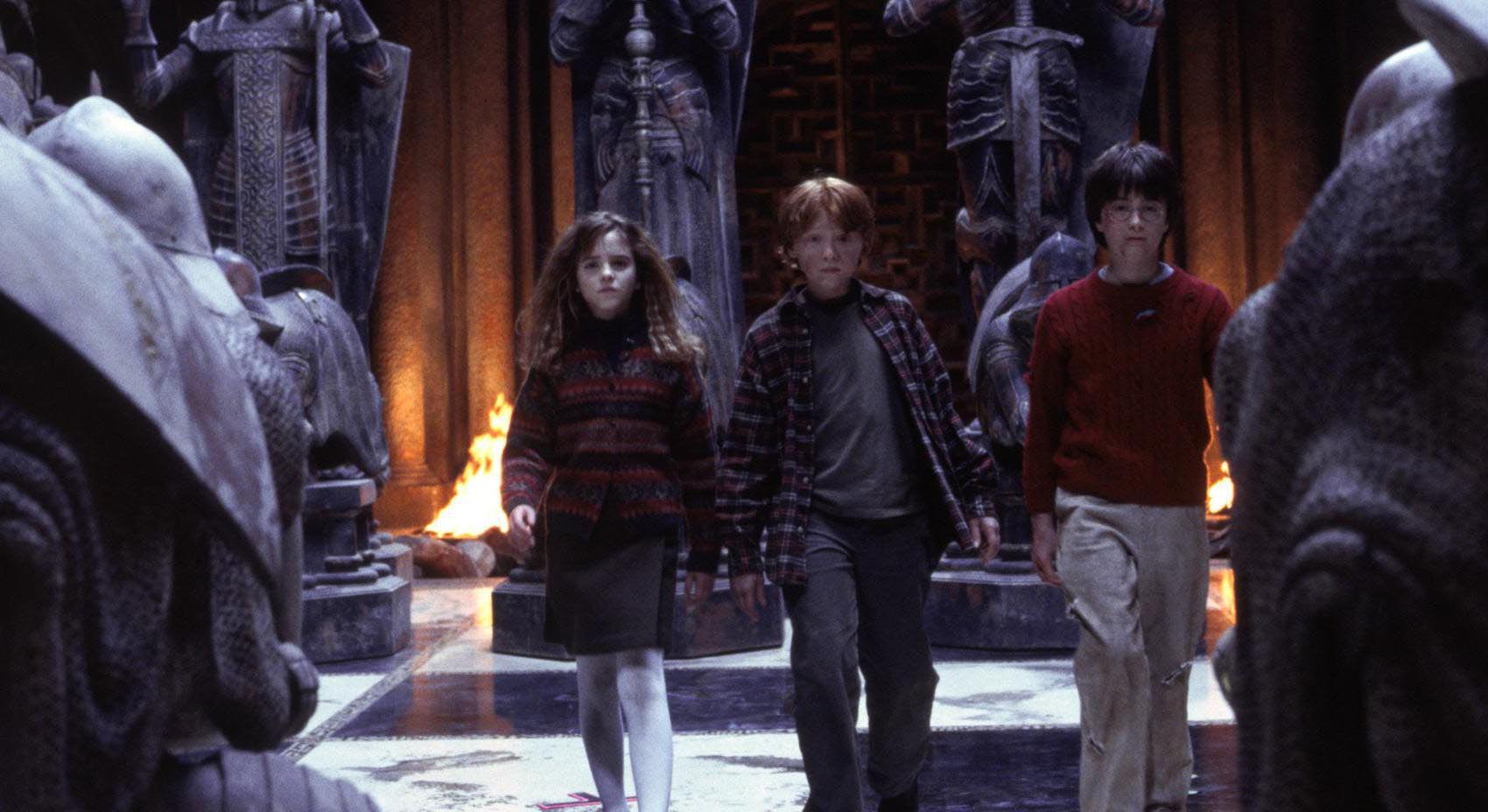 As far as stuffy Oxford dramas go, Harry Potter and the Sorcerer’s Stone has them all beat. You wouldn’t know by watching the film that J.K. Rowling’s titular wizard is looking for familial closure. Director Chris Columbus shamelessly trivializes orphan Harry’s childhood angst, transforming the boy’s pre-teen existence at the Dursley home into an abrasive Cinderella procedural. Cousin Dudley is about as obnoxious as portly British chaps come, which makes the brat’s entrapment inside a snake’s cage Harry’s well-earned last laugh. Lost here is the joy and mystery that should accompany Harry’s pre-pubescent discovery of his wizard talents. Daniel Radcliffe’s asexual Harry turns 11, learns to snake-talk and is whisked away to the Hogwarts School of Witchcraft and Wizardry by his creepy “godmother” Hagrid (Robbie Coltrane). Leaving his bone-dry childhood behind, Harry’s new Candyland abode becomes home sweet home for fellow wizards and witches alike.

As a greatest hits compilation of J.K. Rowling’s book, Columbus’s film dishes out set pieces so disharmonious to each other you might forget their utter heartlessness. Most unfortunate is how many of the film’s more evocative scenarios are lost amid the mind-numbing, non-stop John Williams score. Sans one cutaway to a snowy seasonal change, the film’s screwy pacing never suggests an entire school year has transpired. If there is anything working to the film’s advantage, it’s Columbus’s deft attention to detail. The Hogwarts School’s paintings have a life of their own, while ordinary childhood desires get the clever wizard-rewrite; if muggles desire Playstation 2, Harry and the gang dream of Nimbus 2000 broomsticks. If there is any truth to be found in Harry Potter it’s that childhood is all about the need for speed, regardless of age or class. In fact, you might have a difficult time distinguishing the film’s Quidditch match from Episode One’s dull pod race.

Harry shines at the Hogwarts School, which turns into a haven for conspiracy theorists and Boston Chicken lovers. Archetypal rapscallions and jealous dopes inhabit Columbus’s group houses (think Midwestern fraternities with tamer hazing rituals). Red-haired Ron Weasley (Rupert Grint) and micro-bitch Hermione Granger (Emma Watson) are Harry’s conspirators in crime. A fluffy Cerberus guards the Sorcerer’s Stone, which Harry and Friends hope to save from the clutches of the aptly named Professor Severus Snape (Alan Rickman, sniveling and pausing dramatically only the way he can). As wondrous as it may be to attend the Hogwarts School, Columbus spends entirely too little time inside the classroom. Maggie Smith, Ian Hart, and Zoë Wanamaker all do the spiritless teacher routine although Columbus tackles spell-casting to charming effect when his tykes learn to make feathers hover.

Hokey special effects sequences aside, the film’s cinematography is bland and muggy. Columbus may not know what to do with a camera yet some of his compositions manage to jolt. Staring into the Erised mirror, Harry’s familial loss is emphasized; a pillar bisects the frame, separating the downtrodden wizard from Richard Harris’s fatherly Dumbledore. Even more effective is the Forbidden Forest sequence; bathed in startling blue tones, this creepy number does wonders with silver unicorn blood as Harry comes face to face with the creature responsible for his parents’ death. If Harry Potter is to be taken as a saga where love saves the day, there are few scenarios here that heighten Harry’s emotional ante. Despite some egregious close-ups and abrasive sound effects, Harry’s final trip through the dungeon finds the boy fiercely duking it out with keys and chess pieces. Harry Potter snags piece of mind and Columbus finds his heart, although the rest of the film is nothing more than a solidly dull celebration of dribbling goo, invisibility cloaks (you’ll wish you had one) and flying creatures. Kid-friendly? I suppose, but where was Tim Burton when you needed him?