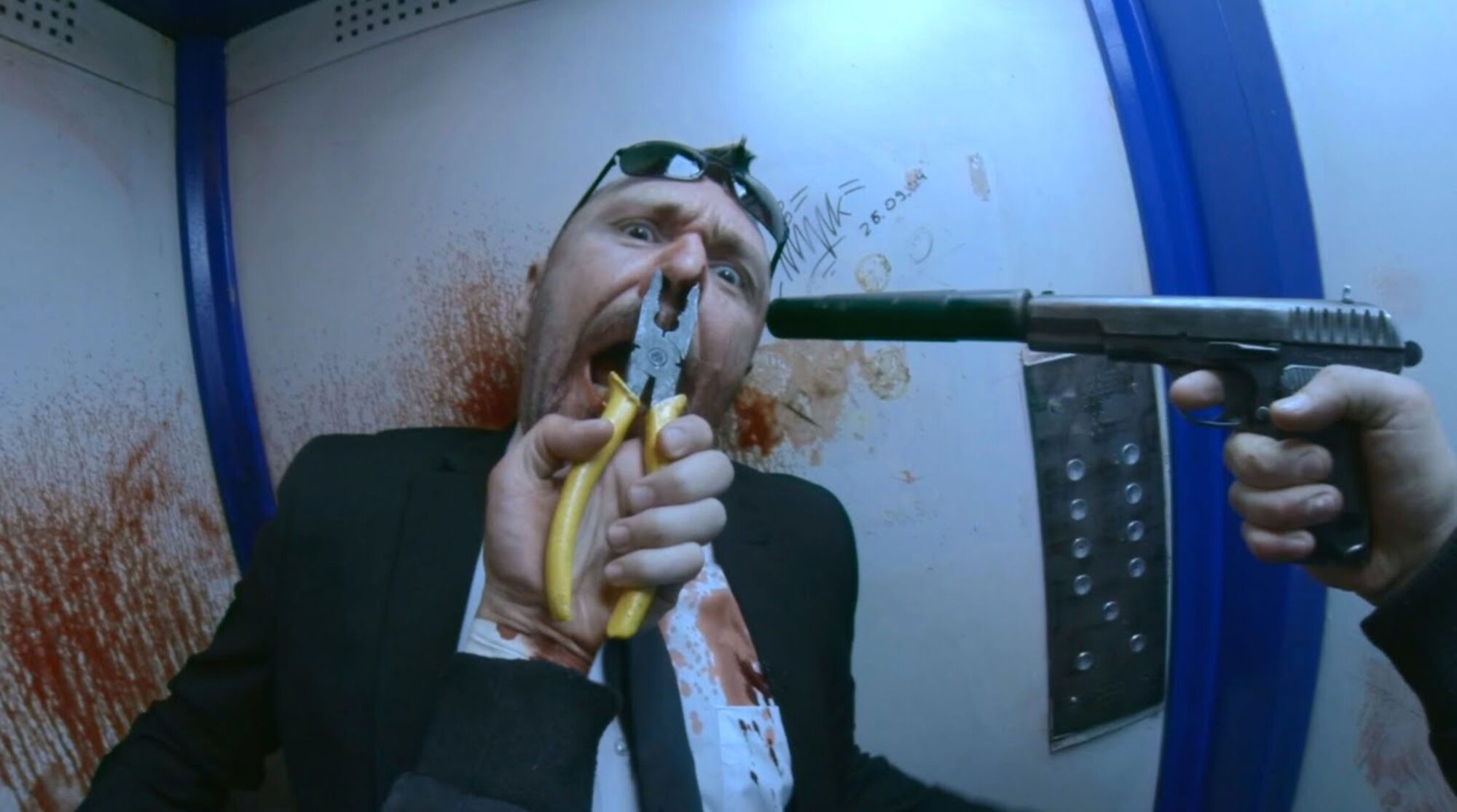 In the first-person action film Hardcore Henry, injury and violence, even insult, are the means to an uncertain end. Throughout, the titular Henry is called a “pussy” several times, usually in the midst of situations that range from the deceptively mild to the ostentatiously wild, from a bus ride down a Moscow street to a conversation with a coke-snorting playboy inside a bordello, where he’s uncertain if the persons to every side of him are friends or foes. His only hope to find the wife, Estelle (Haley Bennett), whose face he doesn’t even remember is a man named Jimmy (Sharlto Copley), but given that this wily stranger was shot dead by police only minutes before, how to explain the moment when Jimmy shows up across from Henry dressed as a hobo and rambling about how Mother Russia is “too goddamned hot”?

The film’s first-person perspective is so ingeniously sustained throughout the lean 96-minute running time that you’re liable to swat at your face when a man covered in steel and wielding a flamethrower sets Henry on fire, or hold on to the edge of your seat when he battles the telekinetic warlord Akan (Danila Kozlovsky) atop a skyscraper from which a free fall seems inevitable. The film’s singular ambition is to immerse the viewer in the thick of a frenzied drive toward the promise of a lover’s touch and a few more minutes of life. Our aesthetic perception is linked to our perception of Henry himself, so that the film becomes a study of empathy through aesthetics. It’s not for nothing that Henry is made to have no voice, as Hardcore Henry’s unbelievably precise choreography of action seeks to tap into a universal feeling of powerlessness.

But the film is also a Russian state-of-the-union address. Throughout Henry’s rampage, Moscow’s citizens are mostly seen as bystanders, though sometimes our hero will pummel his way through a situation where masculine aggression reigns and demands to be checked. He may not remember himself too well, but Henry intuits the difference between right and wrong, crushing a police officer’s balls in the midst of an attempted rape. In another scene, after dousing the fire that takes over his body with a young man’s water bottle, Henry pilfers a bunch of clothes from a park bench, subsequently triggering a run-in with a group of roughs that quickly turns into a pissing contest. Henry might have apologized to them if he had a voice, but his mission is urgent, so he must content himself by clocking one of the men in the face for so arrogantly parading his sense of his own physical might.

Hardcore Henry, though, is both a mockery and celebration of that might. The ultimate truth of Henry’s crisis is an expected one, a dictate of a plot that feels almost as depthless as the two flashbacks to Henry’s father (Tim Roth) that strain to give the film a sentimentality it doesn’t need. In the end, the sheer insanity of the film’s hyperbolic action, often ballsily accented by non-diegetic blasts of music as Henry stumbles from one unlikely or surprising scenario after another, is enough to robustly give shape to not only the sheer impossibility of Henry’s existence and power, but his sense of obsolescence. Purposefully one-note, the film has been compared, not unfairly, to Run Lola Run and first-person shooters, but its audacity is closer to that of Russia’s extreme climbers, who also thrive on flaunting their fearlessness and resourcefulness in ways that feel like an extension of and resistance to the postmodern masculine ideal foisted on them in the age of Vladimir Putin.

Review: Everybody Wants Some!!