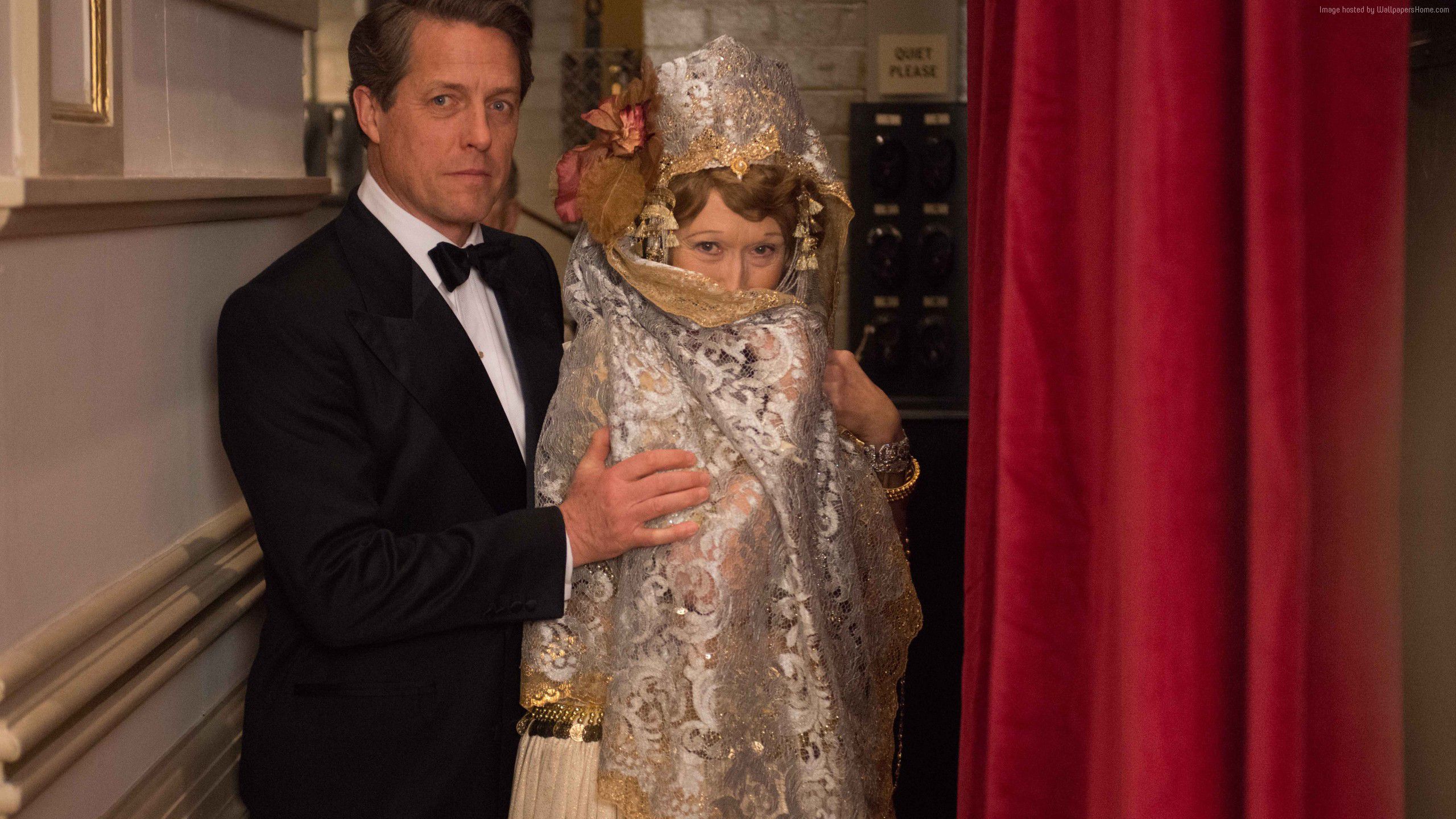 Florence Foster Jenkins was a mid-20th-century New York socialite who became known for her generosity to musicians and musical institutions, then grew notorious for the abysmal singing voice she insisted on sharing, through concerts and recordings, with an increasingly amused public. Florence Foster Jenkins, the latest take on her life (the most recent before that being Marguerite), is the story of a long con told from the point of view of the perpetrator and her enablers. That technique worked well in Penny Lane’s recent Nuts!, where it set up a second-act reversal that revealed the dark truths behind the triumphal myth that film’s subject had created around himself. But director Stephen Frears and screenwriter Nicolas Martin construct a suspiciously simple and sympathetic story about Jenkins (Meryl Streep) and play it straight through (though not entirely straight, as a streak of broad comedy runs through the film), leaving audiences to wonder about the very things that make Jenkins’s story intriguing in the first place.

As we learn in the film, Jenkins was considered a child prodigy on the piano, well enough known to perform for a president. So was she a genuinely gifted pianist, or were the people around her then as deluded about her musical talents as she was later in life? And if she was talented as a child, and loved music as much as she purported to, how could she have so misjudged her own abilities as an adult? Some have speculated that the syphilis Jenkins contracted as a young woman from the husband she was married to only briefly, or the mercury and arsenic she took as a cure, might have ruined her hearing, but the script contains no hint of that or any other explanation for her blithe, decades-long run of laughably awful performances.

The film is clear about the role Jenkins’s inherited wealth played in her “career,” though it lays the responsibility for having purchased the illusion of success wholly on the shoulders of her business manager and life partner, St. Clair Bayfield (Hugh Grant). We see Bayfield carefully curating the audiences allowed in to her initial, small performances and paying critics to write puff pieces about her, but his machinations are portrayed as a comic yet touching indication of his devotion to her—or perhaps his determination not to kill the goose that lays his golden eggs. Grant plays Bayfield, a failed actor, with tightly coiled self-containment papered over with an easy charm that feigns openness, making his motivations intriguingly opaque: Is Bayfield Jenkins’s parasite, her paramour, or a little of both?

Meanwhile, we’re asked to admire Jenkins’s tenacity and empathize with a poor-little-rich-girl naïvete and lack of guile so profound that Bayfield’s pet name for her is “Bunny.” Streep is a gifted enough singer to imitate a bad one convincingly, and she nails the deluded diva’s odd phrasing, flat notes, and penchant for overemphasizing some notes and petering out on others. (When we hear the real Jenkins on the soundtrack at the end of the film, it’s hard to tell the difference.) Streep’s vocal performances, which she delivers in flamboyant costumes big on kitschy extras like jumbo tiaras and angel wings, are expertly overdone—but, in the film’s strongest achievement, she makes it impossible to laugh too hard without feeling guilty.

Streep inhabits Jenkins’s ample body fully, giving her an endearing hint of physical clumsiness and a childlike sincerity and single-mindedness that sometimes collapses into an equally primal, trembling vulnerability. When Jenkins first realizes, at the start of a concert she booked for herself at Carnegie Hall, that the people in the packed hall are laughing at her, the tears that seep into Streep’s eyes and the desperate sidelong looks she shoots at Bayfield make the utterly justified guffaws seem crude and cruel.

But is it really everyone’s duty to prop up the fragile egos of any delusional millionaire who demands public admiration? Once again, the film neatly sidesteps a sticky question, stifling our laughter rather than dealing with its implications. The fictional Agnes Stark (Nina Arianda), a portly businessman’s brassy blond trophy wife, becomes Jenkins’s improbable savior this time around. Agnes laughed herself silly the first time she heard Jenkins sing, yet she defends her at Carnegie Hall, hectoring the audience for laughing and insisting that they all cheer instead. They obey, Jenkins takes their applause at face value, and the show goes on as Jenkins reverts to her customary happy haze of denial. But feigning approval that way is more harmful enablement than it is a kindhearted white lie. In fact, it may not be kind at all, given that every phony ovation probably makes it that much harder to accept the truth when—surely inevitably—it hits home, as it does for Jenkins the next day, when she reads the review of her performance in the New York Post.

A long line of social satirists, from Jonathan Swift to the Marx Brothers to Amy Schumer, would argue that a wild whoop of derisive laughter is an appropriate response, maybe even a corrective, to delusions of grandeur. But not Florence Foster Jenkins, which champions coddling people like Jenkins and treats critical thinking as the enemy. Not only do the filmmakers wink at Bayfield for bribing lesser critics, but they treat the Post’s Earl Wilson (Christian McKay) like a self-righteous prig for insisting that his obligation to tell his readers the truth and champion the art of singing outweighs any inclination he might have to protect Jenkins’s feelings. Streep and Grant are mesmerizing, both separately and apart, and one or the other of them is nearly always on the screen, injecting considerable humor and humanity into this story of a legendarily lousy performer. But the film leaves us stranded, in a space somewhere between comedy and tragedy that feels like no place at all.

Review: Kubo and the Two Strings

Interview: Alice Winocour on Disorder and the Language of Trauma