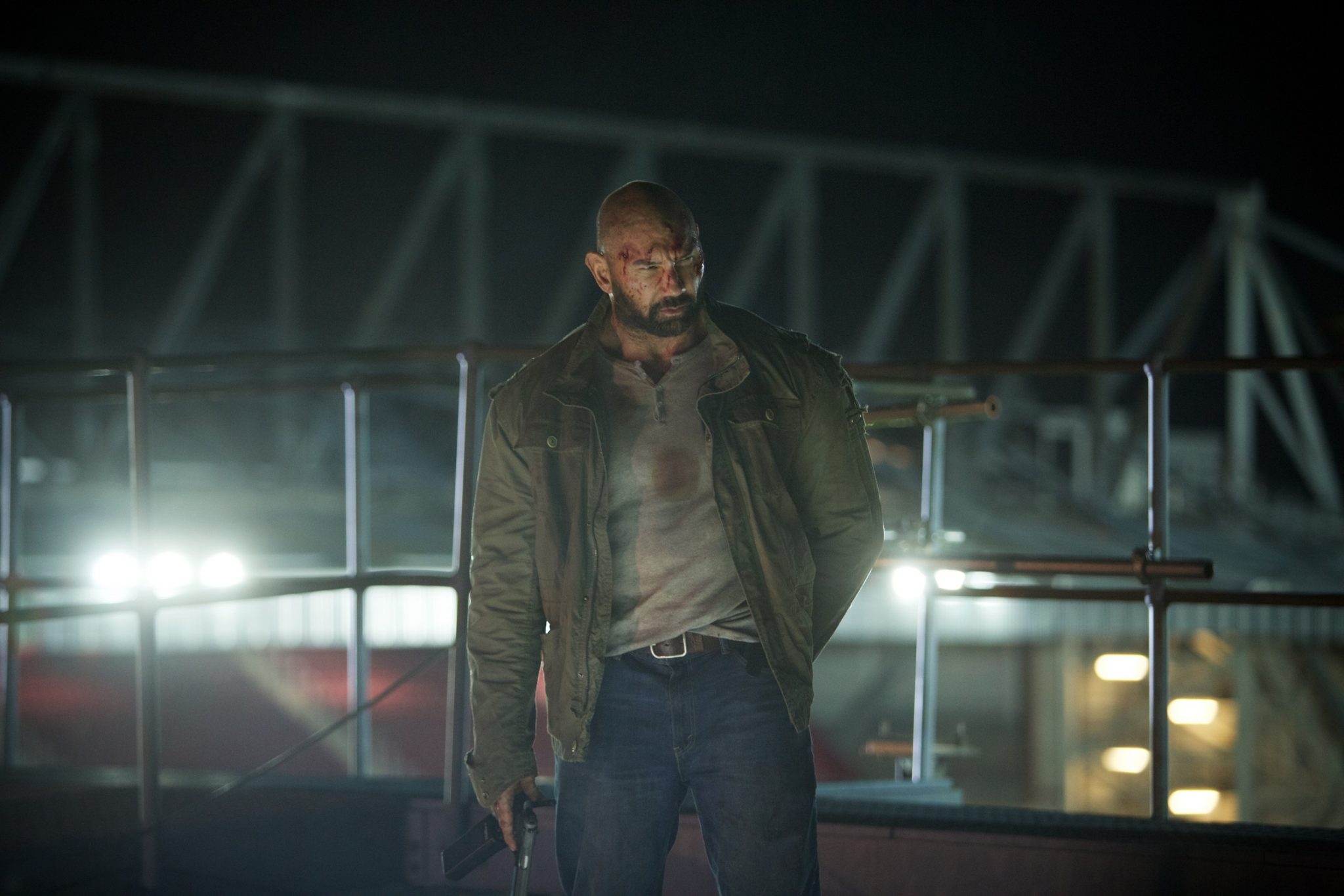 To observe that the Dave Bautista-starring action flick Final Score is yet another Die Hard knockoff may be tiresome, but it’s not as if the film gives one much of a choice, as it offers up a ceaseless barrage of scenes lifted from the John McTiernan classic. These sequences aren’t self-reflexive in the way that, say, Die Hard invokes cowboy archetypes to underscore its theme of heroism. When Bautista’s character throws a body off the top of a structure in order to get the attention of police, or incurs the wrath of the big bad’s second-in-command by killing her beloved fellow terrorist, it’s clear that these scenes have been pilfered from Die Hard so as to save this film’s makers the trouble of having to invent something remotely new.

Bautista’s version of Die Hard’s “right guy in the wrong place” is Michael Knox, a U.S. Special Forces soldier attending a game at the fictional West Ham soccer stadium in London. Though he hates soccer, a quality the film emphasizes to establish his John McClane-style blue-collar Americanism, Knox bought tickets to the game as a gift to Danni (Lara Peake), the daughter of a fellow soldier killed in action. West Ham is playing a team from the fictional Russian oblast of Sokovia—oddly, the same name as the Eastern European country invented for Avengers: Age of Ultron—when a group of Sokovian nationalists, fronted by Arkady Belov (Ray Stevenson), takes over the stadium. They threaten to blow it up unless the British government turns over Arkady’s brother, Dmitri (Pierce Brosnan), who’s hiding incognito in the country.

Bautista’s roles in the Guardians of the Galaxy films and Blade Runner 2049 allowed the former pro-wrestler to flex his dramatic muscles. In making Knox a sensitive father figure to Danni, Final Score wants to similarly exploit the seeming irony of Bautista’s big-lug personality, but as a character Knox lacks a memorable hook, as he isn’t an alien who can’t read social cues, nor an android living a life of existential solitude. He isn’t even, in the vein of Die Hard, a normal guy in over his head. Knox, instead, is the 2018 version of an action hero, which is to say either a superhuman or, what amounts to the same thing in the current American imagination, a military hero.

Like the film that contains him, Knox is a copy of a copy, shorn of the details that distinguish a true original. There have been plenty of decent Die Hard derivatives, but Final Score offers too little novelty to be included among their ranks. Even most of the particulars of the film’s scenario are redundancies—mainly of the “Die Hard in a hockey stadium” film Sudden Death. And Final Score proves it isn’t above borrowing from the borrowers: Like the 1995 Jean-Claude Van Damme flick, it features a grisly hand-to-hand fight in the stadium kitchen involving a deep fryer. Around that point, it may strike one that Final Score is less a film than a CliffsNotes study guide for early-‘90s action cinema.