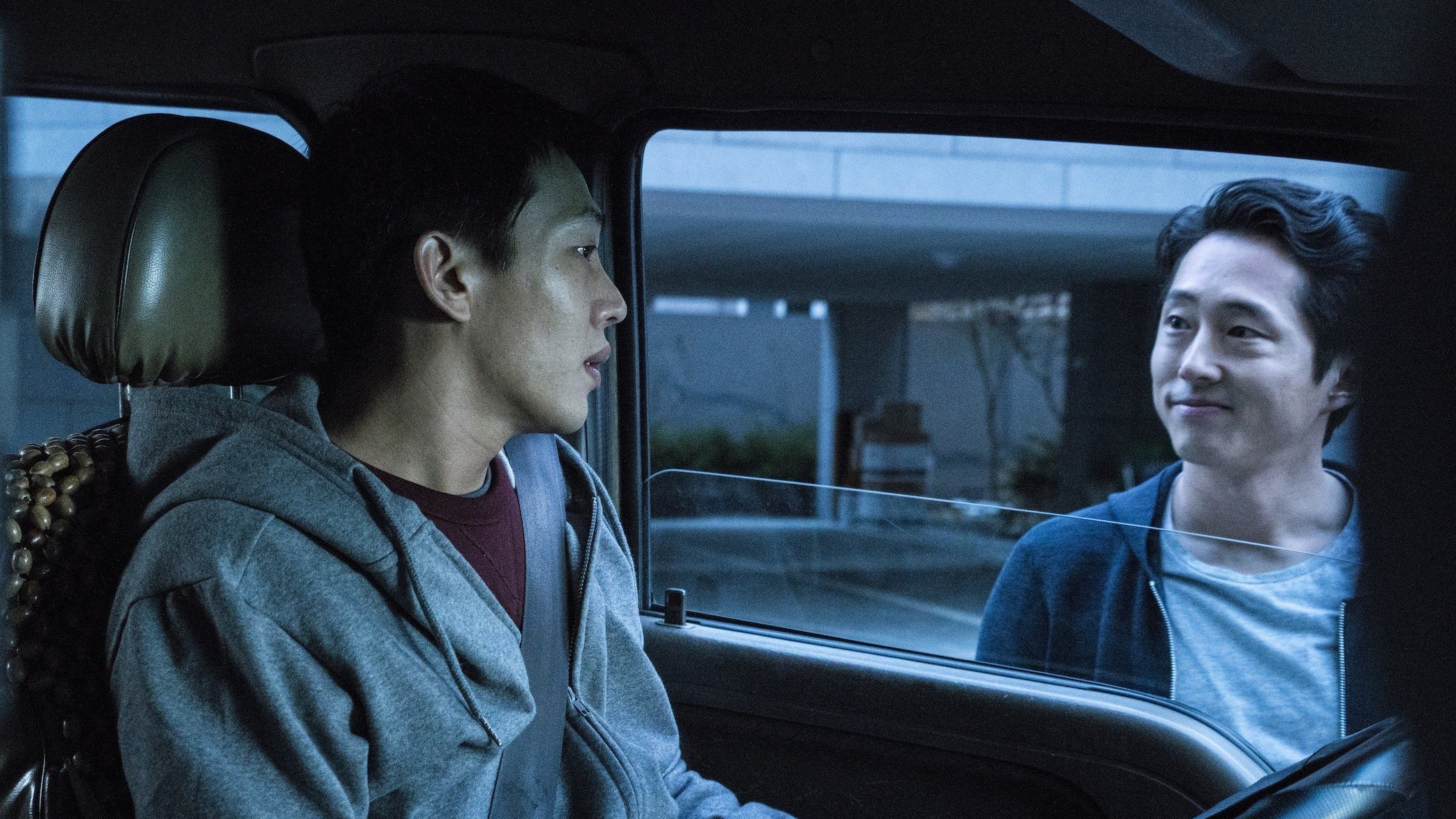 The opening of Lee Chang-dong’s Burning sees Jong-su (Yoo Ah-in), a young man living in Paju, walking through a busy city street, lugging merchandise on his back and dwarfed by signs and advertisements, every upbeat brand color a note in a discordant cacophony. Yoo spends much of the film with his mouth almost perpetually agape, as if he were desperately trying to swallow the air around him or stuck on trying to articulate what he really thinks. Like many young people in South Korea, he’s underemployed and caught up in the commotion of a society defined by the juggernaut of consumerism.

Lee is a social realist whose work is still loaded with symbolism that verges on the poetic. The watchful eyes of Jong-su, who lives near the demilitarized zone between the two Koreas, double for the widescreen camera that patiently roves over and registers the film’s action. Burning, based on Haruki Murakami’s 1992 short story “Barn Burning,” is fixed on messy and mundane surfaces, and yet amid its displays of everyday naturalism are references to preternatural rituals and symbolic offerings. By its conclusion, Burning has broken through its zero-sum late-capitalist confines in order to invest aesthetic grandeur to the quotidian, and in disquietingly sublime fashion.

In the film’s opening scene, Jong-su runs into Hae-mi (Jeon Jong-seu), a childhood classmate who works for a blow-out retailer, trying to attract shoppers with coarsely rehearsed dance routines. Later, at a bar, she makes an impression on the Jong-su, an aspiring writer, as a precocious and alluring eccentric—a different kind of creative—showcasing her new hobby of pantomime, explaining as she peels and munches on an invisible tangerine that the trick isn’t pretending that the tangerine is there, but forgetting that it isn’t.

Hae-mi’s faux tangerine may as well be real in her hands, as there’s a vividness to the way she details the ritual of a Kenyan tribe’s ritual dance of the “great hunger”—a quest for life’s meaning and not literal food—that comes to feel as tangible as the din of the bar and nearby traffic. Hae-mi seems to be full of stories, many of which may be untrue. Indeed, her very countenance is a modification, as she says she’s had plastic surgery—which may or may not have stemmed from Jong-su having found her ugly when they were children, though that’s an assertion that’s forgotten as soon as they become lovers.

Usually lost in the abstractions of his mind, Jong-su now finds himself part of a concrete relationship. As Hae-mi is leaving for Africa in a few days, she asks him to watch her cat while she’s away. And while the only proof that the cat even exists are the droppings in a litter box, Jong-su dutifully feeds the animal, in between handling his family farm and tending to the legal matters of his father, who awaits sentencing for assaulting another farmer. Jong-su seems to have romantic designs on Hae-mi, but a wrench is thrown into those plans when she returns from Africa with Ben (Steven Yeun), an insouciant cosmopolitan with a Porsche and a surplus of leisure time. And maybe it’s because Young-su envies Ben that he essentially becomes a third wheel in Ben and Hae-mi’s relationship, in the same way South Korea is deferential to the superpowers, namely the U.S. and China, that loom over it.

There is something undeniably appealing about Ben that feels like a respite from the film we’ve heretofore been dropped in. Before this suave, Westernized dude showed up, Burning felt stuck alongside Jong-su, and then we’re invited into Ben’s impeccably arranged luxury apartment and the film takes on a new life as a study of contrasts. Lee’s camera shows global capitalism’s frenzied nervous system in the streets, and its calm reward for an elite few in Ben’s upscale digs. But who is Ben? Jong-su, working through his literary mind, scornfully sees him as one of South Korea’s many Gatsbys, for whom work and play are indistinct, living the good life on the backs of people like Hae-mi, who will be handily disposed in time. Lee is drawing an analogy between how both authors and sociopolitical systems cast real people as abstractions or metaphors. The author or artist heightens life with metaphor, while the exploitative materialist cheapens it, and for Ben, the employment of “metaphor” implies something destructive and not creative.

While the three characters smoke pot on Jong-su’s family farm, Ben discloses one of his hobbies: burning down greenhouses. Later, Ben tells Jong-su that his pastime brings him ecstasy, like “a bass sound that rips to the bone,” and that he’s scouting for a new greenhouse. And given how the film’s score is composed mainly of a bass sound, it’s as if we’re being clued into what Lee may be up to. Ben and Jong-su’s conversation happens at almost precisely the middle of Burning, when the film undergoes an ecstatic metamorphosis. Emulating the “great hunger” dance that she described earlier, Hae-mi removes her clothes and performs a ritual before the setting sun. And as the dwindling light transforms the colors in the sky, a dreamlike air blows through this sequence that would appear to usher Hae-mi toward oblivion.

With Burning, Lee extraordinarily obliterates the bifurcation between life and representation—the thing in itself and the metaphor. Soon after this rhapsodic episode, Hae-mi vanishes. First Jong-su gets a call from her number, but there’s no one on the other line. He tries contacting her, but it’s as if Hae-mi has disappeared without a trace. Ben, meanwhile, seems to be an increasingly nefarious presence, whose pastime for burning greenhouses, Jong-su infers, may have all along been code for murdering young women. And it’s around here that the film, which builds to a climax in which Jong-su fulfills his role as an author, suddenly takes on the characteristics of an amateur detective story as Jong-su follows Ben all over the place.

The Murakami story on which Burning is based is a riff on the famous William Faulkner story of the same name, and Faulkner is Jong-su’s favorite writer, who he describes as “like I’m reading my story.” In Burning’s final act, the film’s subjective point of view switches from Jong-su to Ben, but it’s as if Jong-su were still hovering over everything and writing what’s happening.

Toward its astonishing finale, Burning goes beyond mere meta-artistry and takes the air of a fierce cleansing ritual, a reactant shadow avenging the monolithic global sensibility that Ben represents. Ritual and art are placed side by side, as Jong-su follows Ben to mass at a lavish church, then observes Ben’s family taking in an art exhibit. On the walls are photographs of true-life destruction reconfigured in a collage of fiery orange and red—history and aesthetics fused by an artist’s infernal intent. Burning’s title, of course, intimates destruction, but also purification. The film begins with the drudgery of Jong-su hauling clothing through Paju and concludes with him stripping and throwing his garments into a sacrificial fire. Lee is in fact orchestrating a rite similar to the “great hunger” dance, or the priest’s homily of Christ: “Through him, in him, and with him, through the unity of the Holy Spirit.” In Burning’s representation of South Korea, particularly during the devastating climax as Ben and Jong-su meet over barren land by a highway, there’s a sense that Hae-mi is resurrected and present “through, in, and with” the makeup of the image. In the background is the gauzy sun—the sun into which Hae-mi desired to fuse and disappear with—like a watchful eye.

Burning’s final image sees Jong-su, naked, somewhat obscured behind a windshield spattered with snowfall. This conclusion, of an artist exposed, might lead one to wonder how much the 69-year-old Lee sees of himself in this drama of his young protagonist. Burning smolders with urgent worry for the future, which is subject to the amoral authority of increasingly rudderless geopolitical leaders. (Not for nothing does Donald Trump’s speech about a “new vision for America” play on a television at one point, and while Jong-su urinates in the background.) Burning has a coolness to its aesthetic approach, but as the film works its way to its concluding twilight, its effect is not unlike the sunset that so affected Hae-mi. The dwindling fire makes way for the cooler light of the stars and moon, but it’s still scorching hot.