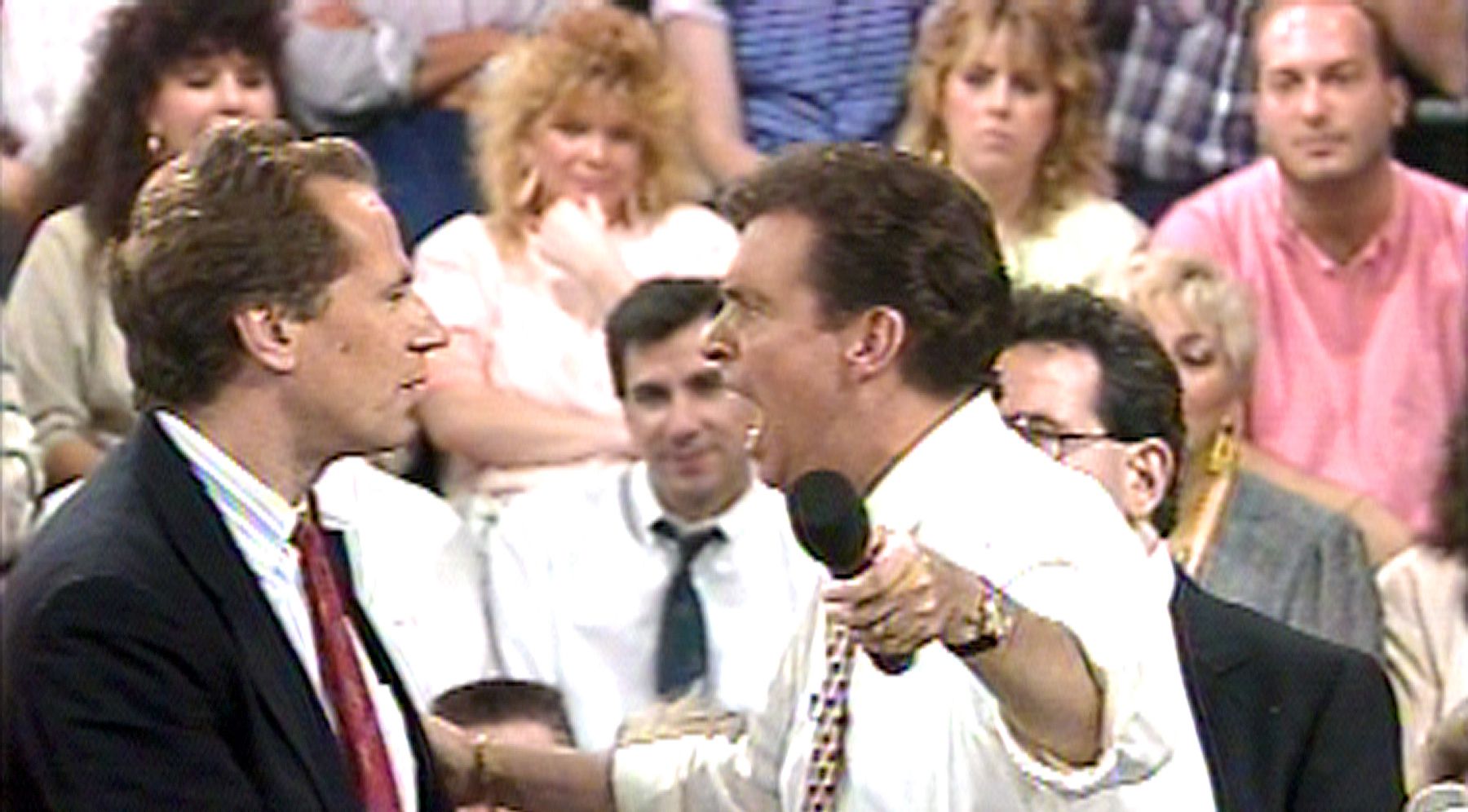 Inflammatory talk-show host Morton Downey Jr. sparked, delighted, and quickly faded like a firecracker—not unlike the erratic, quick-fire presentation of his persona in Évocateur: The Morton Downey Jr. Movie. Directors Seth Kramer, Daniel A. Miller, and Jeremy Newberger take a diverting, congested approach to Downey’s life and work, most significantly posturing the man’s public image and short-lived The Morton Downey Jr. Show as setting a precedent for contemporary populist commentators such as Glenn Beck. But the program was more brawl-ready Jerry Springer than Fox News—a sleazy pioneering force of obscene television infused with current issues and conservative politics, whose crazed audience Ed Koch once described as a “lynch mob.” Downey took pleasure in provocation, exhibiting a particular penchant for cigarettes and epithets, blowing smoke and anger in the face of guests, including Ron Paul and Al Sharpton, and the occasional liberal audience member.

The son of showbiz royalty (his father was a famous Jazz Age singer, his mother a carousing dancer), Downey is framed with a pop-psychological interpretation of self-destruction, with his father’s popularity feeding into his insatiable quest to be more famous than him. The most intriguing aspect of Évocateur is Downey’s backstory, which unfurls with evidence of his chameleonesque qualities (he penned a book of poetry in 1969, and photographic acknowledgement of his support of the Kennedys is offered at one point), creating a portrait of the titular loudmouth that’s more enigmatic than demystifying. In the end, the filmmakers are more interested in rattling off as much information as they can about Downey, and doing so with embellished statements, risibly literal animation, and on-the-nose soundtrack selections, than they are in truly grappling with his identity conflicts.

Although the concept of pure performance is addressed in regard to Downey’s on-screen theatrics, Évocateur spends too much time forcing the idea of Downey as a Tea Party prophet to confront his rabble-rousing, cantankerous candor as “an act,” even taking an irrelevant detour to a 2010 Conservative Media Conference (nine years after Downey’s death from lung cancer) which features Herman Cain and Michele Bachmann. This insistence of influence is repeated even in the final shot of the film, which sees Bryant Gumbel inquiring on a late-‘80s CBS morning show, “Is this a passing fancy, or is this the front of a wave?” Downey remains a fascinating subject, but the doc’s aggrandizing of his GOP talk-show legacy is further undermined by the reveal of Downey’s self-promoting 1989 hoax (he claimed to have been beaten up by skinheads in a San Francisco airport, but later reports show he manufactured the whole situation); this high level of deceit, along with interviews with personal friends, implicate his on-air personality was a hollow act for entertainment and high ratings over actual political clout. Not unlike Downey, the doc is full of confused, truncated convictions—mostly driven by a noisy, ADD-addled eagerness to entertain.