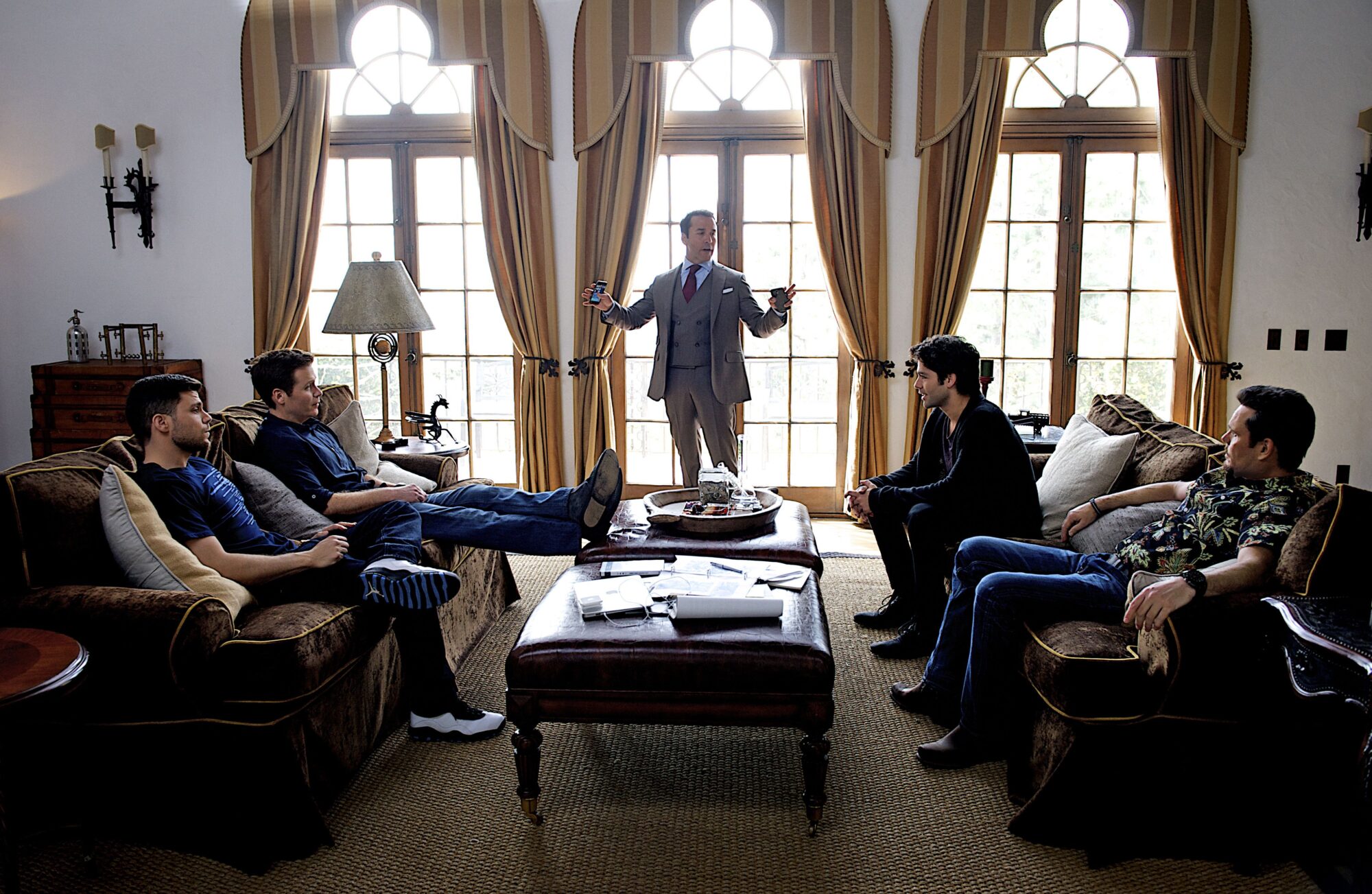 The truly pathetic thing about the bigger, longer, and uncut big-screen Entourage is that even exponentially dumber filmmakers still could have lapsed, even haphazardly, into more rewarding moments of cheap Hollywood meta humor. No one working in Hollywood today is unaware of the industry’s gaudy ridiculousness, least of all the Ten Commandments-sized cast list of celebrities and business mavens who agreed to skewer themselves in cameos peppered throughout, but it takes a pack of bros with a pretty heroic lack of introspection to craft a lazy paean to prick-entitlement this unrepentant. If ever there was a movie equivalent of dad bod, Entourage is it.

Picking up a good few years after the close of the HBO show’s eighth and final season, Entourage starts by plunking its rapacious quartet onto a yacht straight from the docks of The Wolf of Wall Street. To the extent that writer-director-creator Doug Ellin wants you to focus on anything beyond the topless porn stars and free-flowing Cristal, it becomes clear that Vincent Chase (Adrian Grenier) is riding high on an ever-mounting crest of success, and his hangers-on are unabashedly feeling the lift from his tailwind. Turtle (Jerry Ferrara), fresh off what appears to be a crash tapeworm diet, is rolling in green from a liquor-branding coup. Vince’s half-ish brother, Drama (Kevin Dillon), only has to pay for sex maybe once or twice a month. And E (Kevin Connolly) has graduated to the Tinseltown big leagues, netting the chance to produce Vince’s upcoming self-directed vanity project that, thanks in part to the largesse of newly crowned head of production Ari Gold (Jeremy Piven), is spiraling wildly over budget.

Unsurprisingly, the film positions women as the most conspicuous roadblock to their success. Whether actively or indirectly, the men of Entourage find their aspirations constantly thwarted, sidelined, or sabotaged by their “better” halves and ingénues. E’s pregnant ex keeps him on the hook of “maybe” getting back together, thereby absolving him of any guilt he might feel for banging supermodels. Ari’s spouse has a long list drawn up of qualifications for allowing him to go back to work in the industry, one which might as well include the dictum “Don’t breathe.” And when Vince’s production gets held up by its chief financiers (a swaggering father-son pair of Texas blowhards played by Billy Bob Thornton and a lip-licking Haley Joel Osment), it doesn’t take long before the group realizes it’s not artistic differences fueling their animosity, but macho turf wars.

Hell, you want more proof that Entourage is nothing more than an overgrown Ferris Bueller’s day off from the distaff staff? Look no further than that roster of star cameos for confirmation. With but one solitary exception (Jessica Alba, who pouts at Ari and threatens to walk off the production if he doesn’t green-light her next movie), it’s a 100% USDA-approved sausage fest. Kelsey Grammer, Tom Brady, Mark Cuban, Ed O’Neill, David Spade, Bob Sagat, Gary Busey, Rob Gronkowski, Julian Edelman, and a whole bunch of other broguls who probably skipped Mad Max: Fury Road on principle. (If “fellow” HBO feature-length spinoff Sex and the City 2 used a splashy gay wedding to assertively establish that film’s devotion to frivolity, Entourage tellingly delegates its gay wedding to a post-credits punchline.)

Long before the reptilian Ari punches out a framed portrait while taking a business call in the middle of a therapy session with his wife (a supposedly rousing moment that may as well have been underscored by Thin Lizzy’s “The Boys Are Back in Town”), it’s abundantly clear that Vince’s choice of material doesn’t represent self-critique at all. His “Calvin Harris drops some EDM Blade Runner in Ibiza” adaptation of Robert Louis Stevenson’s Dr. Jekyll and Mr. Hyde only cites the latter half’s name in the title, which should be fitting and satirical, but in this context only confirms that the id behind Entourage knows not and cares not what its other half does. At the very least, though, the movie saves its one decent joke at Hollywood’s expense for last, when Doug Ellin stages Hyde’s triumphant redemption at, no, not the Oscars, but the Golden Globes. Now that’s entertainment!