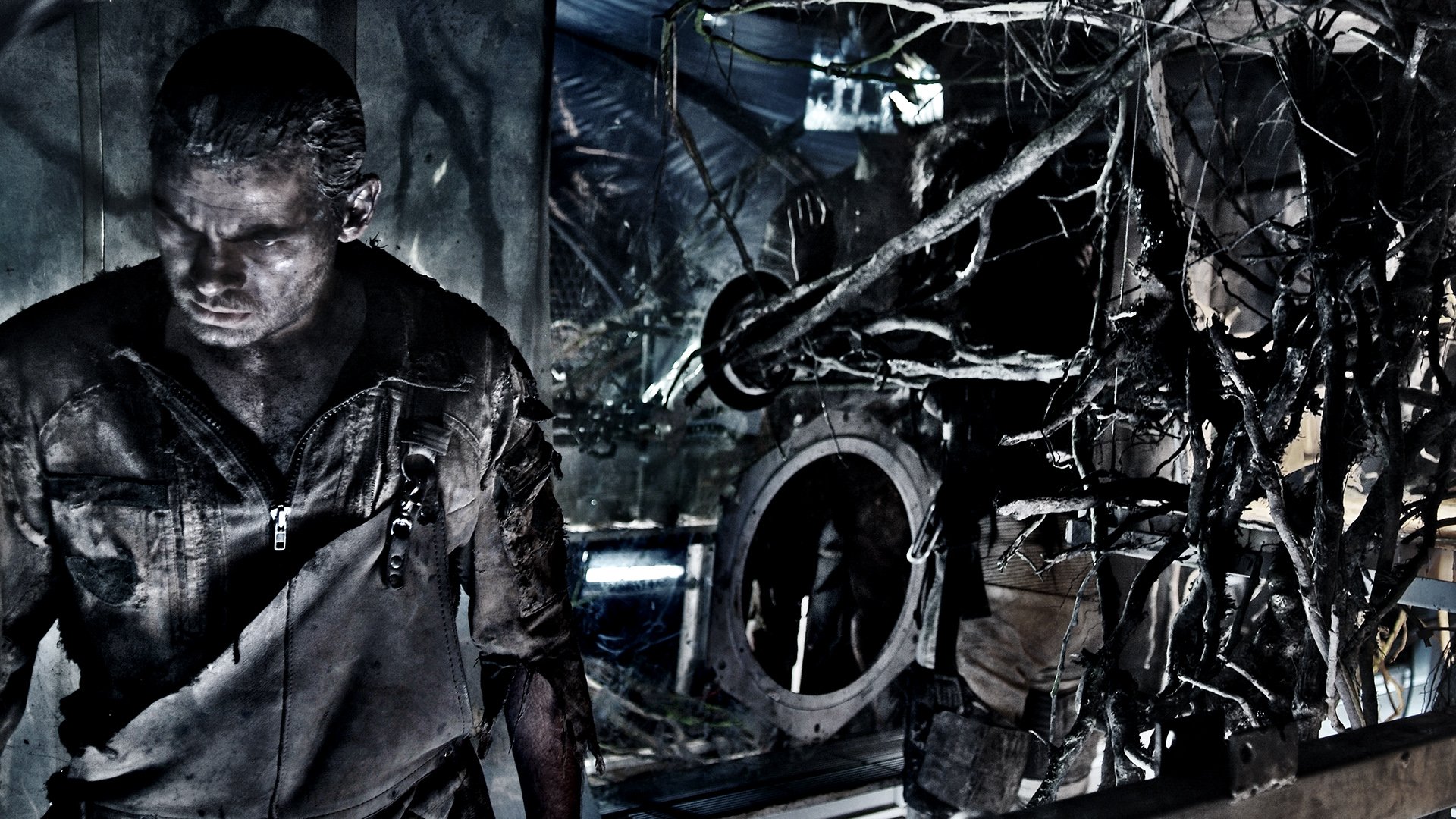 Though it looks like a highly polished, quasi-avant-garde bit of speculative fiction, contemporary French sci-fi flick Eden Log is really a far-flung descendant of the Heavy Metal comics of the ‘70s and ‘80s. That infamous omnibus series, which reached a peak of popularity after the theatrical release of a schlocky 1981 animated movie, trafficked (then and now) in power fantasies for stoners and loners of all sizes. The comics privilege the primitive man’s basest urges, lament society’s fallen state, revel in wanton destruction and feature a wealth of gratuitous cheesecake and nudity. Eden Log has got all that and a grungy, micro-budget look to boot. Director Franck Vestiel and co-writer Pierre Bordage film their Cro-Magnon sci-fi saga with lots of expressionistic front-lit images of an amnesiac explorer (Clovis Cornillac) as he navigates pitch-black caverns to find out who and where he is. It’s too arty to look like Heavy Metal, but at heart, it’s all about beasts, men and spreading the seed of macho chaos.

In Eden Log, Vestiel and Bordage champion a nameless troglodyte because he is, in essence, a mutant. Like the half-breed white cowboys in Westerns who have adopted the more bestial tendencies of their Native American heritage, he’s a new breed of man. Initially awakened by a strobe light that peppers his dark surroundings with white hot illumination, Cornillac’s caveman stumbles around covered in a hardened, greyish gruel that extends from his head to his bare chest. As documented by Vestiel’s pseudo-doc shaky camera, he warily canvases his devastated, subterranean surroundings (overgrown with skeletal tree roots and shorn electrical wires) for a good 20-30 minutes until he encounters someone. He soon realizes that he’s been here before and so starts to clamber around in hopes of understanding his role in this now-abandoned futuristic society.

Slowly, through a number of damaged video consoles and a few armored security guards who are actively seeking him for unknown reasons, Cornillac’s mouth-breather gets the lay of the land. He’s surveying “Eden Log,” a failed Utopian project that harvested a never-ending source of energy from the deep roots of a mysterious Neu-Tree of Life. After several diminishing harvests, the colony’s scientists discover that their Tree requires human fertilizer to continue to serve their needs. Naturally, victims sacrificed to the Tree are people obliquely identified only as “those” and “these populations” by the emotionless, though decidedly female-looking, artificial intelligence that runs “Eden Log.” The only living person Cornillac meets is a female botanist. Being a treacherous female, she of course tries to mine him for data and then use him as a decoy to escape his pursuers. But she only ends up getting raped by him (and liking it, of course) for her sexy, sexy treachery. Eden Log is essentially a more loutish Soylent Green set in a futuristic commune instead of New York City and where “Soylent Green” is not in fact people but rather immigrants and minorities (?) turned into mutants so that a killer Tree can use them as so much mulch. Do the evolution, baby.

If you ignore Eden Log’s pervasive and, granted, intriguing lo-fi aesthetic, you can look at it as a contemporary complication of its rickety, ideologically unsound foundation. Being an anti-hero for the Information Age, Cornillac figures things out almost entirely from patchy video fragments and memory keys he finds littered throughout the deserted complex. The film takes place in a post-technology era, one where the only surviving data comes in YouTube-sized hunks that Cornillac, our cypher of a central protag, must unite independently. He’s not fighting against the patriarchal, Big Government version of “The Man” from Heavy Metal’s heyday, but rather today’s less unified, more bureaucratic “The Man,” one represented by the interchangeable, disembodied Robo-Women that haunt the surveillance footage Cornillac pores over. Eden Log’s “The Man” isn’t anybody really except the specter of institutionalized progress, and because that’s a dirty concept in a Metal-head’s lexicon, it must be represented by complaisant virgin women scientists and malicious ice queen gate-keepers.

The weirdest thing about Eden Log is that, try as you might to completely shelve your feelings about the film’s attractively ominous ambiance, you can’t. If it’s possible, the film’s mood is more in your face than its brain-dead philosophy and hence cannot be ignored, even if it only makes the film an eye-catching dumb show. After all, being a Heavy Metal pastiche means that Eden Log can only have one conclusion, one that mirrors the end of Darren Aronofsky’s infinitely more ambitious The Fountain. The Tree must die and so Cornillac, with his “mutant” genes, must impale himself on its roots and let it suck the tainted, semeny life force out of him. This way, The Tree expands way past any controllable size, the source of “The Man”’s power is overtaxed and its usefulness to civilization is ended. Cornillac’s a veritable cretaceous martyr, man. Why can’t I look away?