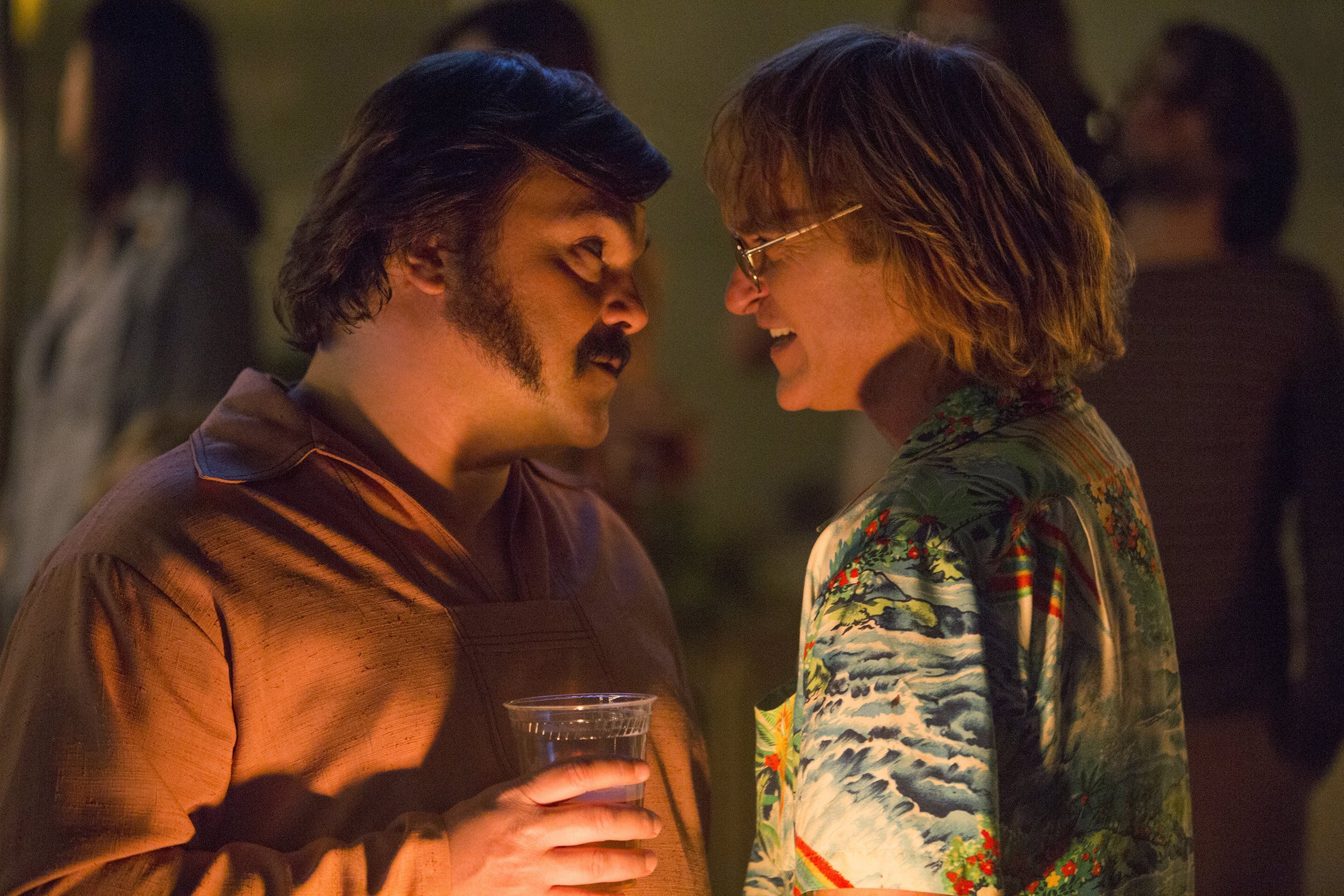 Being an addict means being ready at all times to debase yourself for the almighty fix, therefore endlessly rationalizing your own devalued self-image. Understanding this, Gus Van Sant’s Don’t Worry, He Won’t Get Far on Foot, a dramatization of the life of quadriplegic cartoonist John Callahan (Joaquin Phoenix), brings uncommon perspicacity to the inevitable clichés that surround so many narratives about substance abuse and recovery. More insightful than riveting, the film is doggedly focused on the work of recovery, and Callahan’s unending quest to be real with himself—because as he comes to understand, only then can he begin to live for other people.

Most biopics work in one of two ways: either they tell a whole life story in a linear—and therefore often anticlimactic—fashion, or they’re built around one sliver of a person’s life to impossibly reflect a greater whole. Van Sant tries having it as many ways as possible, beginning at the end by introducing his protagonist addressing a packed lecture hall, speaking from a position of fame and comfort. The filmmaker uses a mosaic-like narrative to avoid the customary biopic crutch of structuring everything around one major cathartic breakthrough, while a separate through line sees Callahan explaining himself to a pack of pre-teenage skateboarders who help him up after “eating shit” on a Portland sidewalk. What first seems a setup for a teachable moment becomes a hang session, with the boys ooh-ing and aah-ing at Callahan’s warts-and-all cartoons, a framing device that lasts the entire film.

We learn that a wild night out with a newfound pal, Dexter (Jack Black, bringing astonishing gravitas to a two-scene character), ended with Callahan’s Volkswagen Bug slamming into a telephone pole at full speed, crippling the future cartoonist for life below the chest. Unto itself, that’s not enough to make Callahan recognize his life has become unmanageable. Only his inability to pour himself another drink after his helper has left him alone at home compels him to link up with an Alcoholics Anonymous group leader, Donnie (Jonah Hill, stretching past type), who becomes something of a personal guru.

Rich with droll observations but never playing its characters for a cheap laugh, these passages betray Van Sant’s interest in the quotidian contradictions of American life during the Reagan years: At one point, a flamboyantly gay socialite leads a Christian discussion group that includes a self-described redneck (Beth Ditto of the band Gossip), a black “street poet,” and a traumatized former military engineer. And as Callahan comes into his own as a cartoonist, Van Sant intersperses lightly animated versions of the real-life artist’s politically incorrect, single-panel comics into the film. This gives way to a sly rumination on Callahan’s knack for a punchline—like the cartoons in The New Yorker, which, in one quick scene, sends him an encouraging rejection notice—that’s colored in turn by his own openness to the surprising fact that his life isn’t yet over. This is drolly reflected, for example, in the image of sea crustaceans evolving onto land-based creatures on an upward slope, culminating in a self-portrait: Callahan at the podium, delivering the same speech that Van Sant uses as the film’s framing device.

Don’t Worry, He Won’t Get Far on Foot isn’t perfect, as Van Sant points his camera all over the place, and Danny Elfman’s generic score is laid over far too many scenes—but then again, the idea of enduring all this self-help in diegetic silence is almost too intense. Van Sant focuses on Callahan’s recoveries (the film makes a pointed distinction between the physical and the spiritual) at the expense of his relationship with Annu (Rooney Mara), the physical therapist who would eventually become his wife. Other than his foster parents—literally seen waving happily as Callahan departs their home before he checks them off a list of people from whom he needs to ask forgiveness—she gets the shortest shrift in the film’s dizzying scenography.

None of it would land without Phoenix’s phenomenally craggy performance, yet another one of his seamless embodiments of a man whose behavior reflexively defaults to low-key suicidal. The film is disarming for its sincerity, unalloyed in its positive thinking but unafraid of showing the gruesome details of alcoholism and denial to back up its bromides. While Callahan’s turnaround from rock bottom indeed allows for conspicuous supporting turns from an ensemble of A-listers in period costume, Van Sant’s decision to make the process a communal one isn’t just a humanistic surprise—it’s also admirably unsexy, and a testament to the comedic potential of going sober.