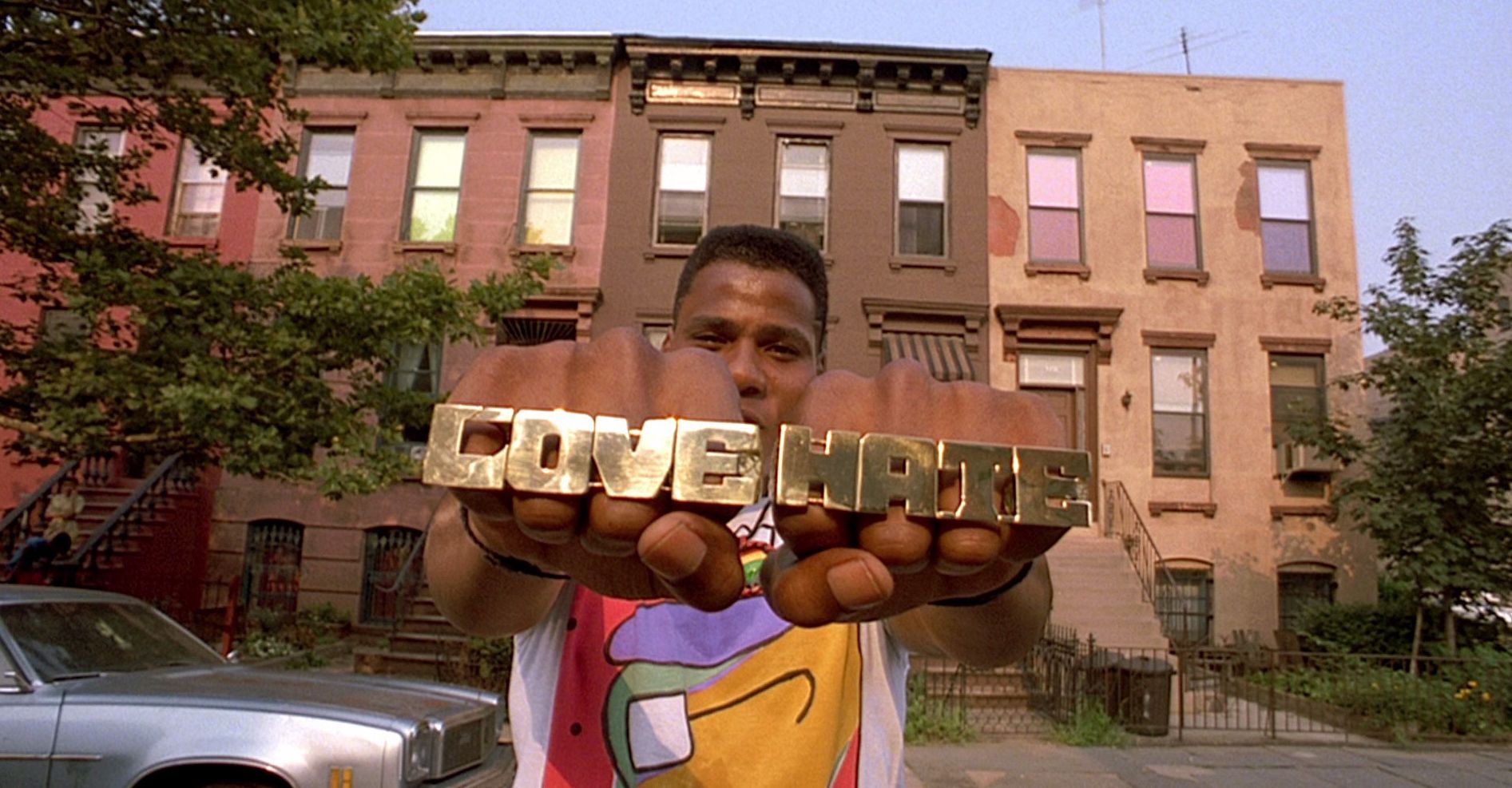 Spike Lee’s films have always deftly worked comedy into tragedy. In School Daze, he stages the psychologically self-destructive conflict between light- and dark-skinned black girls as a jazzy, old Hollywood musical showstopper. In Jungle Fever, Samuel L. Jackson’s Gator gives his unforgiving father one last dance he made up just for his mom, and hustles his way into an early grave. Crooklyn’s loopy Aunt Song discovers her lost dog’s corpse when it catapults out of the hide-a-bed like a canine Pop-Tart. And in Do the Right Thing, his uncontestable masterpiece, and one American cinema’s absolutely unimpeachable classics, Lee deftly follows the actions of two dozen people on what turns out to be one of the longest, hottest, most memorable and maybe most tragic days of their lives. And he does it without so much as a single lugubrious or extraneous moment.

And it’s through fucking around from frame one, as Rosie Perez thrusts, grinds, kicks, and boxes her frustrations out to Public Enemy’s “Fight the Power,” Do the Right Thing’s uncompromising musical leitmotif. Lee’s scenario restricts him to a rough baker’s dozen hours in the Brooklyn neighborhood of Bedford-Stuyvesant on what newspapers are warning will likely be the hottest day of the year. Assisted by a trio of old men sitting idly in front of a blazing red wall (a Greek chorus, if you will), Lee introduces a fully functional community at various stages of wit’s end, even before the sun has hit high noon. In an almost exclusively African-American and Puerto Rican, largely lower-middle-class section of town, Bed-Stuy residents are both fed and economically mocked by the only two successful businesses in the area: a corner market run by Koreans and a pizzaria owned and operated by Sal (Danny Aiello), a gruff but genial soul who rather presumptuously assumes himself the neighborhood paterfamilias. Aside from his two sons (one racist, the other naïve), Sal also employees and surrogate fathers Mookie (Lee), who serves as the neighborhood’s unofficial liaison between Sal and his clientele.

Even before Bed-Stuy’s race relations unravel in the heat, Lee’s film strives for insistent political consciousness, which is to say he doesn’t just bring up political topics but dares to actually take positions. (In one scene, Lee films a benign conversation about the pitfalls of interracial, intergenerational courtship in front of a brick wall bearing the graffiti message “Tawana told the truth,” referring to the alleged rape of Tawana Brawley at the hands of, among other white men, New York cops.) Sometimes the politics are conservatively combative, as when a white bicyclist scuffs Buggin’ Out’s pristine Air Jordans and justifies his right to gentrify Bed-Stuy with a curt “I was born in Brooklyn.” Other times the politics are more provocatively intertwined with the movie’s, as in the Brechtian interlude in which Mookie, Pino, and other representatives of the block spew as many hateful racial slurs as they can manage, some of which are wickedly funny (the white cop calls an off-screen Puerto Rican a “pointy-shoes red-wearing Menudo mira-mira cocksucker”).

Some reviewers, largely the same nervous nellies who warned the movie might incite race riots, took issue with Lee’s perceived free pass to eschew political correctness, especially in Bush I’s “kinder, gentler nation.” But that’s precisely the point of Do the Right Thing. It takes political concepts away from the lip service of cloistered authority figures (including the film’s dirty cops) and dissects them through the lives of those who are forced to live by them. In this context, the radio DJ Mister Señor Love Daddy’s stately, nearly two-and-a-half minute roll call of great black musicians carries as much weight of the Emancipation Proclamation.

Lee’s deceptively vibrant pop comedy (“Fuck Frank Sinatra!” “Fuck Michael Jackson!”) is both freewheeling and, as the film’s final half hour reveals, extraordinarily calculated. When tempers spiral out of control and grave injustice is meted out to one of Bed-Stuy’s inhabitants, the disruption is a direct slap to shake audiences out of complacency. But rather than react with solemnity, Lee films the resulting riot with the same angular, fish-eyed, oversaturated effects, again aligning tragedy with comedy and suggesting The Powers That Be can strike at any given moment. And because the racially charged dialogue early on in the film is presented in the same cinematic context as what is a pretty clear-cut case of institutionalized race hate, Lee manages to suggest a clear political position while still admitting there are never any simple answers. Instead of ending the movie on a note of mutual understanding between Sal and Mookie, as originally scripted, Lee instead closes on a note of fragile, quizzical acknowledgment. Nothing more.

What critics in 1989 called incendiary and angry should more accurately be characterized as challenging. Do the Right Thing is no staid civics lesson; instead, it’s a microcosmic test case in the form of a seamless ensemble piece. Anyone who thinks Spike Lee movies are perpetually disappointing would be forgiven for thinking so if they’re comparing the director’s works against this perfectly balanced one. If other movies in Lee’s body of work have approached it in confidence, few movies by Lee or anyone else have better feng shui. Like Rear Window to Alfred Hitchcock, like Nashville to Robert Altman, like Playtime to Jacques Tati, Lee’s Do the Right Thing is an undiluted representation of its creator’s artistic command.