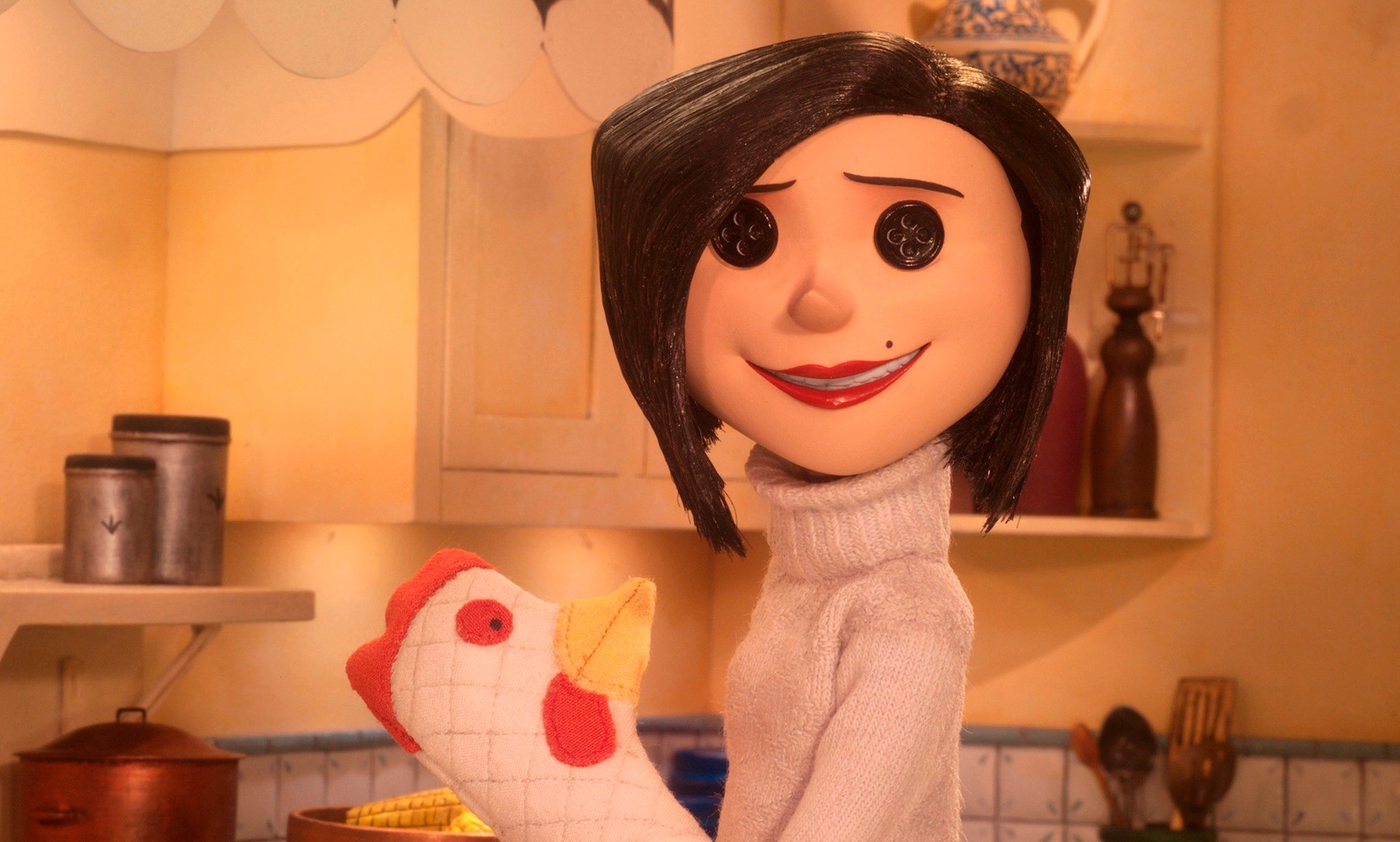 How awesome is Coraline? So awesome. That’s the Twitter review, and that’s really all that needs to be said up front. Coraline is that rarest of creatures, the PG-rated kids’ movie with no big scares (there’s one “boo” moment, but it’s pretty wan) that can still creep you out through tone and theme alone. Neil Gaiman’s come up with a plot mirror to, well, Mirrormask: young girl feels neglected by well-meaning parents, enters a much more appealing fantasy world, wants to stay, discovers her desire to escape is actually selfishness that could literally kill her parents, saves the fantasy world’s oppressed and her parents, returns to a reality where it seems it’s all been a dream, and has ambiguous confirmation of her heroism at the end. The difference, visually, is money and medium: Mirrormask’s relatively low budget led to conceptually clever but necessarily murky CGI visuals roughly interacting with live-action players. Coraline has more bills, hence 3D stop-motion animation, which is the perfect way for Gaiman’s fantasy to come alive.

Like most fantasy, Coraline isn’t breaking new thematic ground: it plays on the fears of understandably busy parents who worry about alienating and losing their children forever, while cleverly exploiting vulnerable kids’ fears of behaving so badly as to for once and for all be abandoned by their exasperated guardians—or, worse yet, that parents need you in some emotionally-consuming way you can’t precisely pinpoint and would somehow be unfair to name (e.g., try being a child of divorce sometime). The first possibility is more likely than the second—and the third is all too common—but kids don’t know that, so Coraline should resonate just fine with children and adults, but for different reasons.) But if family trauma can be the ultimate trauma (assuming you didn’t grow up in, say, Bosnia), that’s why Gaiman’s concerns don’t seem stale. The other reason is that he’s on his own planet when it comes to set-pieces. If there’s a fantasy precedent for a theater filled with 248 (individually animated!) Aberdeen terriers watching an old-school vaudeville act that quotes Hamlet during the trapeze portion, I’ll confess to being unfamiliar with it. Most of Coraline is too good to be spoiled with in-any-case pointless enumeration, so let’s skip it. All you need to know is that there’s young Coraline, there’s her fantasy world, and it’s all consistently spellbinding.

What Henry Selick’s achieved has been a long time coming: a 3D animated movie with a point beyond gimmickry. Stop-motion is photographed on real if miniature sets, and real sets have real depth: the opening credits throw a button and a needle at you, and then—obligatory opening thrills over with—Coraline only uses the 3D to fill out the spatial relationships. (Some particularly lovely throwaway shots show rain dripping outside a window, and the depth between that and the people inside is pretty amazing.) The depth increases subtly in the fantasy world, and reaches vertiginous depths in the disorienting finale: 3D serves a thematic function, which may be a first. The fantasy world’s imagery, thankfully, doesn’t devolve into specific metaphorical mirrors for Coraline’s real-world frustrations; it doesn’t beg to be translated into Jungian or psychoanalytic terms. The fears Gaiman and Selick play upon don’t need that. It’s just pure delightful imagery, even when it’s freaky. Opportunities for ponderous readings at the expense of visceral stimulation (or, god forbid, an appeal to archetypal significance) are quashed handily.

Coraline, nonetheless, doesn’t slouch in any department: the dialogue is consistently witty, the voicing is distinctive (special props to Ian McShane as a calisthenically-enthusiastic Russian whose body seems molded at least a little bit on Yellow Submarine’s Blue Meanies), the allusions entirely avoid Shrek’s circle of pop-culture hell and assume at least a rudimentary familiarity with Shakespeare (good enough for a kid’s film), and the dissolves from scene-to-scene can be startlingly well thought-out. It’s not perfect—I could do with far less appearances from the usual fantasy oohing-and-aahing choir auditioning for an Edward Scissorhands remake, and could do entirely without the generically spunky Coraline, who adds nothing to her own story—but it’s far, far better than we have any right to expect this early in the year. It’s eerie without being totally unnerving; if Selick and co. ever had the inclination to really scare the shit out of people with a full-on Lynchian 3D spectacle, though, we might all be traumatized for years.