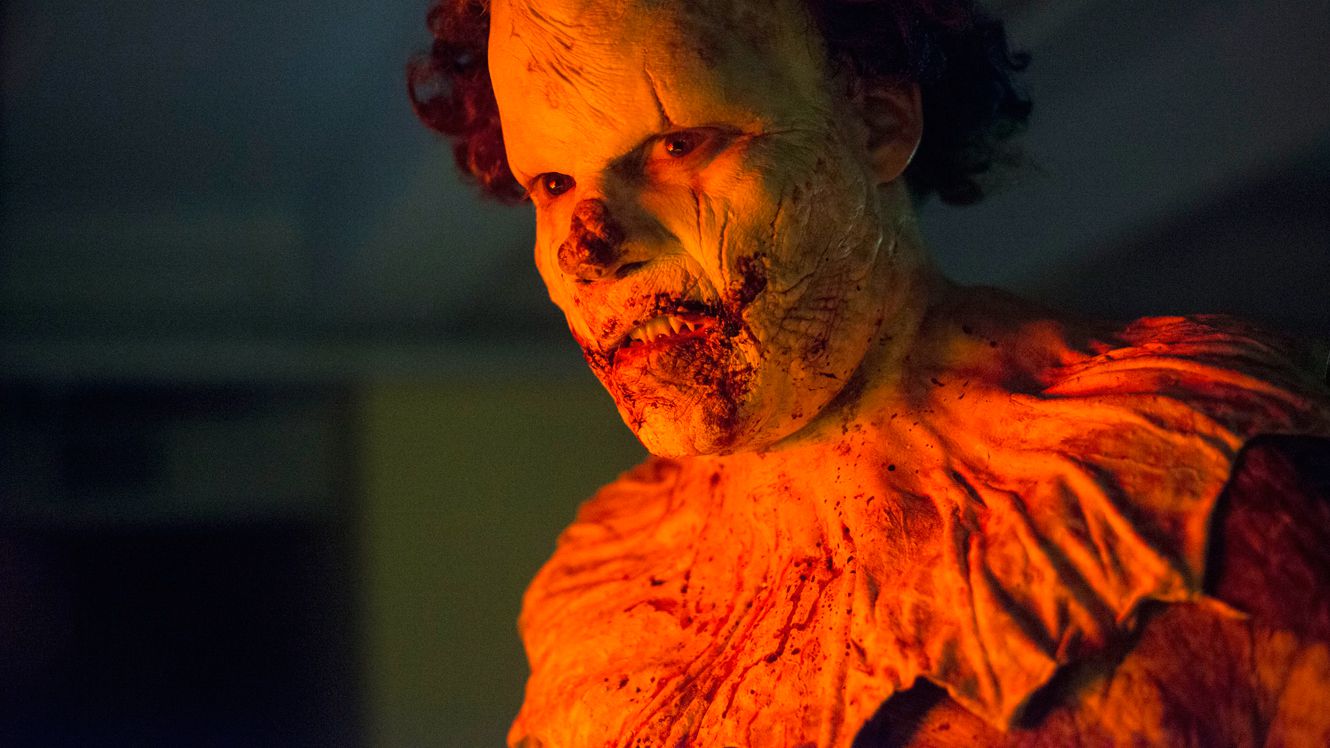 Based on one of Eli Roth’s parodic trailers, Jon Watts’s Clown is a lifeless treatment of an amusing and unsettling concept. Realtor Kent (Andy Powers) is stuck in a bind when the clown scheduled to entertain his son’s birthday party cancels, leaving him to rummage through the private things in one of the houses he has on the market for an impromptu clown suit. As luck would have it, there’s a suit inside a creepy trunk, but there’s a catch: It’s actually a demon that possesses its wearer, turning them into something resembling a cross between Spider-Man’s Venom and It’s Pennywise.

One can picture what Roth, a gleefully tasteless prankster who co-produced the film, might’ve done with this material (his mock trailer is scarier and funnier than its feature-length counterpart). Disappointingly, Watts evinces little interest in mining the tropes associated with clowns, and he does nothing with the scarily funny notion of a respectable professional who suddenly refuses to shuck a party costume. Instead, he fashions a routine body-horror story of a man turning into a monster. The director lingers on Kent as his makeup grows more hideous, instantly rendering him an outcast who wanders a series of mostly generic settings: a truck stop, a patch of woods, and eventually a Chuck E. Cheese’s, a promising backdrop that somehow fails to yield any evocative lunacy.

Watts appears scared of the ludicrousness of the premise, determined to transcend the project’s roots as a joke, which is precisely what he should’ve embraced. Our most powerful fears and fantasies are irrational and usually absurd, as are many social customs that we take for granted, such as hiring strange men in lurid makeup to entertain children on their birthdays. The potentiality of Clown resides in the way it could expose casual rituals for their alienating, nonsensical strangeness, and there are a few such moments near the beginning, when Kent first tries and fails to remove the outfit, which culminates with his wife, Meg (Lauren Allen), pulling off part of his real nose.

But Watts misses one opportunity after another. When Kent and Meg fool around on the couch after their son’s party, before the severity of Kent’s new situation is understood, they appear to be on the verge of attempting to initiate sex, which would presumably be difficult considering that Kent’s new suit is fused to his body. One assumes that Watts is building a joke or set piece out of the biological and social awkwardness of the situation, but he allows the moment to pass unfulfilled. Ultimately, there are no memorable scenes in Clown, apart from the usual stalk-and-slash tropes, and not a single memorable image. Even the botched TV adaptation of Stephen King’s It had that shot of Pennywise standing under a sewer grate.

This leaves us, then, with a dull and unpleasant procedural in which a pasty creature hunts and eats children, finding them in motels, indoor playgrounds, and even in their homes, with Watts proving as unwilling to interrogate the film’s pedophiliac subtext as he is anything else. Clown and Watts’s higher-profile follow-up, Cop Car, both revel in outlandish high concepts in which children are elaborately yet unimaginatively imperiled, and are both staged with a patina of seriousness that suggests Watts to be an uninspired exploitation film huckster with delusions of respectability.