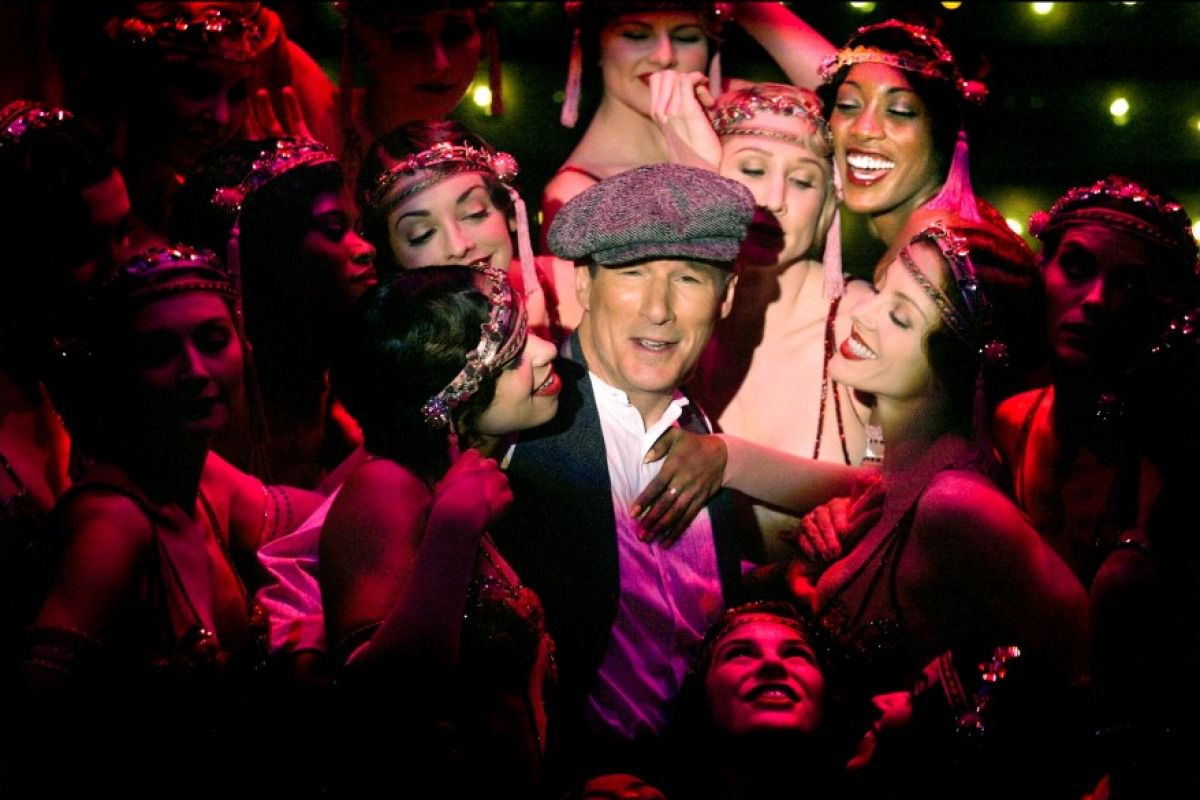 In 1975, Bob Fosse and Fred Ebb brought their musical adaptation of Maurine Dallas Watkins’s play Chicago to the Broadway stage. Overshadowed at the time by the vastly inferior Chorus Line, Chicago received retribution in 1997 when the show’s revival won six Tony Awards, including one for Walter Bobbie’s snazzy direction. The minimalist Chicago is a rarity on Broadway, a triumph of less-is-more razzle-dazzle. In the show, Chicago’s jazz-and-liquor milieu comes alive via sexy song-and-dance while Bobbie evokes a prison complex by simply confining the show’s action to the front part of the stage. Chicago tells the story of the murderous Roxie Hart and how she incurs the shame of her henpecked husband Amos and the jealousy of Velma Kelly when she turns her time in prison into a media blitzkrieg with the help of playboy lawyer Billy Flynn.

Though certainly competent, Miramax’s all-star bash Chicago must count as a disappointment of sorts. Screenwriter Bill Condon has taken pains to flesh out the relationship between killer vixens Roxie (Renée Zellweger) and Velma (Catherine Zeta-Jones) but the film lacks the sophistication, sexiness and overall allure of the Broadway revival. Bob Marshall’s direction is a critical fault here, as is the horrendous means by which the film has been spliced together. If Baz Luhrmann is incapable of holding a shot for longer than two seconds, Marshall has never even heard of a long shot, let alone an establishing one. Little care has been taken to establish the glitz and glamour of the film’s ‘20s Chicago. Though the city’s hellfire is implied in the film’s songs and smoky interiors, the unusual lack of exterior shots suggests a fear on Marshall’s part to fully embrace the potential of the cinematic medium. Only once does Marshall truly bring Chicago’s contradictions to life. When the prison block’s Hungarian murderess takes a swan dive (Björk anyone?), Marshall fabulously evokes the thorny dialectic between Chicago’s many modes of spectatorship.

Because Marshall takes little pain to create a life between musical numbers, Chicago seems to plod along from one outburst to the next. Though Zeta-Jones’s singing ability is less than stellar, Velma’s “I Can’t Do It Alone” is compromised more by the sad means by which the performance (and others like it) have been cut up in the editing room. Moulin Rouge was shrill but full-bodied where Chicago is completely textureless. The integrity and rhythm of Velma’s solo tribute to duo-ship is completely lost here. “I Can’t Do It Alone,” “Cell Block Tango” and “Mr. Cellophane” are numbers that demand to be seen from a distance so that their intricate physical and emotional rhythms can be fully savored. What’s the use of having John C. Reilly sway from one side to the other as Roxy’s “look right through me” chump-husband if his full movements can’t be observed in a continuous shot?

Condon’s creative liberties are completely inoffensive and work for the most part: he takes the man out of Mary Sunshine (Christine Baranski doing her best drag queen impersonation), puts the dyke in Mama Morton (a full-bosomed Queen Latifah) and gives Velma a courtroom outburst that negotiates the musical’s weakest transition point. Curiously, it’s the film’s stagiest performance (“Roxie”) that stands out above the rest, not only because Marshall allows his camera to pull back, giving his frame some breathing room, but also because Zellweger’s performance is a revelation. The actress nails her character’s sex appeal, cattiness and naïveté. In the end, Zellweger comes across as more vulnerable and, yes, even sexier than Zeta-Jones. Of the film’s major players, only Zellweger successfully carries all her tunes. A glossier palette, maybe even Scope photography, could have done wonders for Chicago. Its ultimate failure, though, is its discordant rhythm.

Review: Confessions of a Dangerous Mind

Review: Catch Me If You Can