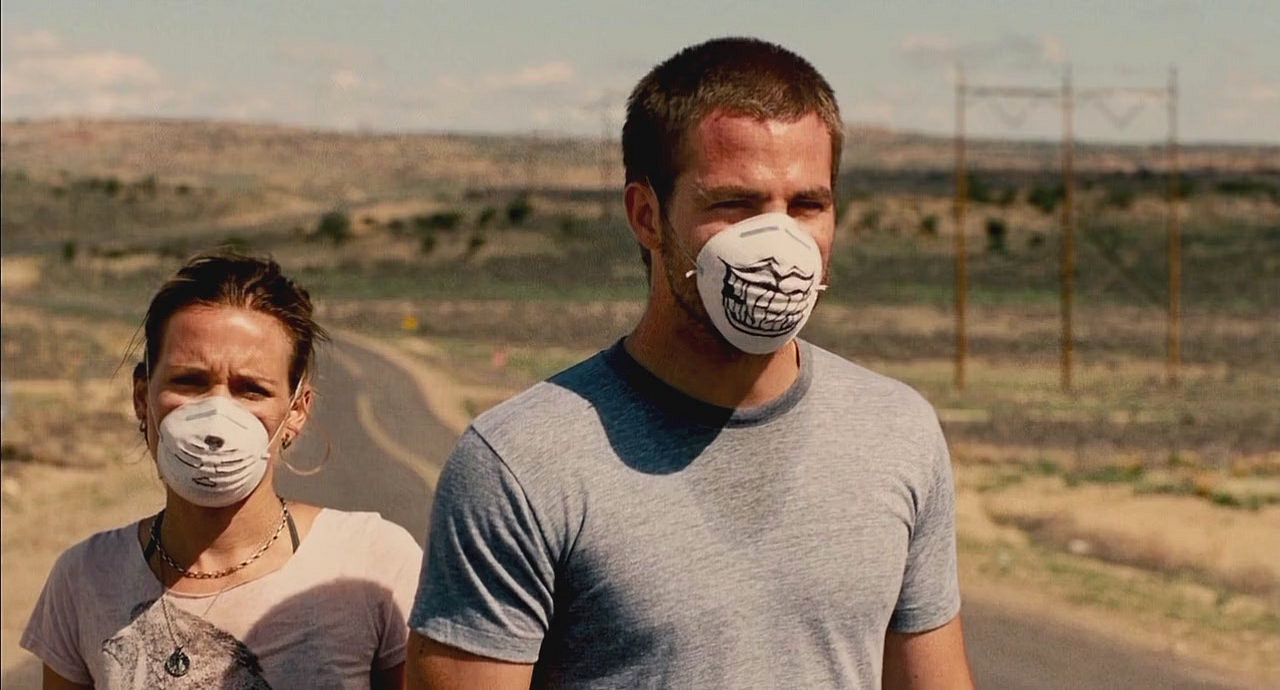 As dickish as it may sound, I have to admit: Christian horror films are pretty fascinating in a frustrating kind of way. They wear their faiths on their sleeves, but more often than not their protagonists wind up coming to terms with their own agnosticism. God is definitely out there in both Alex Proyas’s Knowing and Àlex and David Pastor’s debut film, Carriers. He’s just not taking calls anymore. Though the protagonists in both Knowing and Carriers realize that they can’t regain their faith in the end, only the ones in the latter film get to live with that guilt. Knowing ends with the coming of The Rapture, which scorches poor Nic Cage’s unbelieving ass like so much dry white toast. Carriers, a kinder, gentler film about the End Times, takes place Post-Rapture, as two brothers and their lady friends come to realize their days are numbered. There’s not much they can do about it, so they sulk, pout, make life or death decisions, then look pained some more. Their stretch of road doesn’t have an end, just a pit stop at an idyllic beach the bros used to vacation at as a kid. Then, the rest of their faithless lives.

Carriers takes place after a modestly bloody, zombie-like plague has broken out. Danny and Brian (Lou Taylor Pucci and Chris Pine) try first to vainly encourage each other and then their women, Bobby and Kate (Piper Perabo and Emily VanCamp), with their hard-hearted “rules” on how to survive. As in any good zombie film, the principle “rule” requires the group to look at any infected victims as prematurely dead. This is before half of them get infected, of course, leaving the less lively half to wallow in their theological misery. Their man-made commandments are doomed to fail, leaving them to face the only judges that still care enough to smite or even abandon them: themselves, natch.

That nigh-catatonic state of disbelief is not, however, achieved through violent confrontations. Instead, it’s hinted at through fairly toothless fights over the existence of a potential cure and an encounter with a bunch of horny, armed men in biohazard suits, which ends well before tears can even be shed. These spats are neutered to the point where the Pastors dare you not to see them as signs of their own faith. Commendable as it may be to not draw too, ahem, liberally, if at all, on the well of gore that the Pastors’ contemporaries vigorously plumb, that kind of restraint looks oddly cruel considering its subjects’ wayward quest to be proven wrong by a sign, a measly portent…anything really.

Their salient conviction is also especially alarming when it comes to the film’s sentimentality and sexism. The fairer sex in Carriers don’t get to ponder moral questions, but are instead privileged with the ability to dote on their men in their own ways. On the one hand, Bobby broadcasts her sexuality as loudly as Brian does his impotence, correcting him when he tells the group that they’re sneaking away for 20 minutes by insisting it will only be a hot five. After she parts ways with the group—her promiscuity, defused as it is here, makes her the natural choice to be the first to go—Brian imagines her as the mother of his children, a hope that quickly leaves him as he guzzles another beer and soaks his beard with manly tears.

On the other, Kate is just as meek as Danny is about deciding what to do next. They’re so cagey about their relationship that they can’t even bear to admit to Brian and Bobby that they’re dating. Decisions don’t come easily to either of them, but ultimately, only Danny can make the few moves they have left. When he confronts his infected brother, Kate just sort of goes along with his decision and lets him be Cain for once. She and Bobby are moral crutches that their two young beaus reach for in their times of need.

This makes the film’s frustrated longing to turn back the clock to a kinder, simpler time that the likes of Glenn Beck remember very well that much more questionable. The main reason they even look for a cure is because a stranded father (Christopher Meloni) they encounter needs it for his infected daughter (Kiernan Shipka, retaining Sally Draper’s widdle speech impediment). When said panacea cannot be found, daddy cradles his little ball of germs and they both sing “The Itsy Bitsy Spider” as our heroes drive away slowly. It’s a last hurrah for “traditional family values” tinted with a desperation that flows as freely as a pundit’s crocodile tears.

The last sliver of Elysian pleasures the brothers and their sexy walking sticks have is Turtle Beach, a memory preserved in a faded color photo they make a point of hanging up in whatever vehicle or place they’re in, but never really look at. Of course, it’s not the same as when they were little: The crabs that went into the mayo-drenched crab rolls Danny fantasizes about are naturally infested with sand beetles. This last haven destroyed by cruel reality, Danny tells us that he wishes the world would be washed away in a second flood. He goes on to say that he’s now certain of only one thing, namely that he’s completely alone. We presume he means Him because Kate’s riiiight behind him. Faithless, indeed.

The Wizened Sympathy of Good Hair