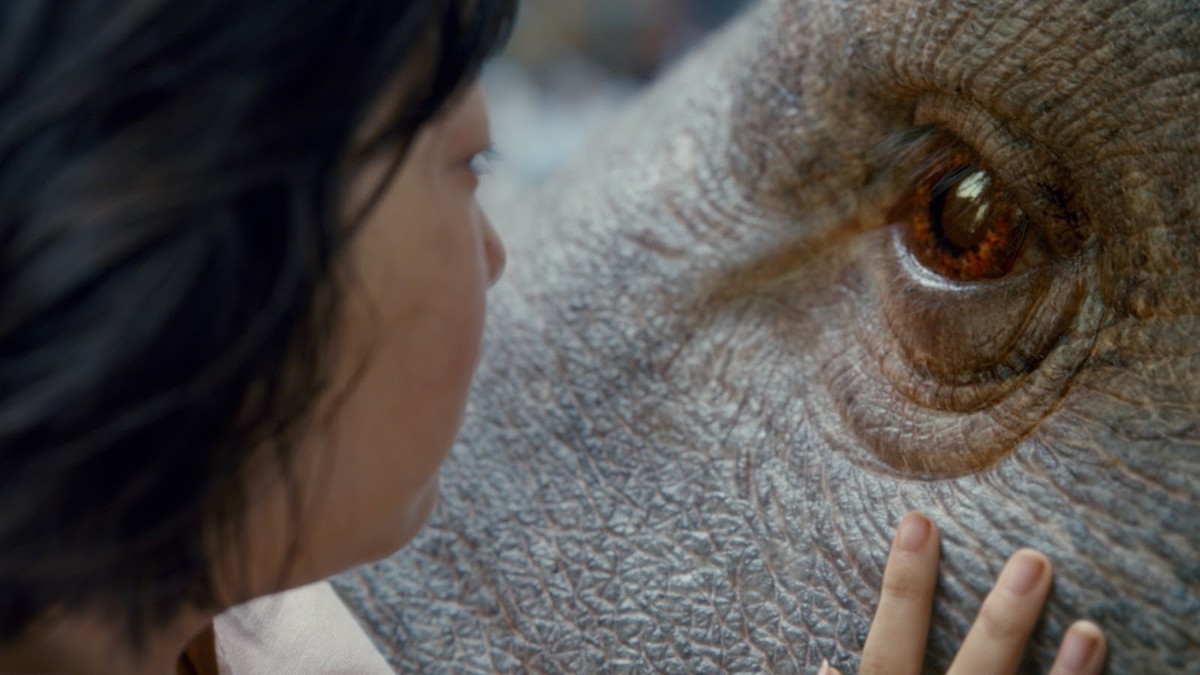 Bong has proven capable of uniting a variety of different tonal ambitions with some razor-sharp satire and impeccable craftsmanship, but Okja feels jarringly disorganized and rudderless for much of its runtime. Even at its best, the film merely musters convincingly imitative set pieces, the highlight of which is a chase scene—cut ironically to the John Denver ballad “Annie’s Song”—that ends with the unimaginative recycling of an action beat from The Host’s funniest sequence. Bong’s filmmaking is so singularly impressive that even at its most derivative, Okja feels like a momentous spectacle, but it’s the first film of his ever to give the impression that the spectacle is masking an otherwise underdeveloped, often incoherent, concept.

Okja’s awkward parceling out of its multifaceted narrative is demonstrated early on, when a phony promotional video from Lucy Mirando (Tilda Swinton), the newly minted C.E.O. of the Mirando Corporation (think Monsanto and Apple combined) is followed by a long, serene passage set in a South Korean forest that drops in on a young farm girl, Mija (An Seo Hyun), and her colossal, genetically manufactured “super pig” Okja. As the Mirando announcement helpfully explains, Mija’s pet is one of 26 that were distributed by the company to local farmers in different countries all over the world 10 years ago, as a long-game promotional effort for selling their new brand of sausage.

With their years-long project coming to an end, Mirando chooses Okja as the “best super pig.” And the news is delivered to Mija and her grandfather (Byun Hee-bong) in the form of preening TV personality Dr. Johnny Wilcox (Jake Gyllenhal, chewing scenery as gleefully as Allison Pill in Snowpiercer), and transported to New York, where he’ll be on display for the company’s impending product launch—after which he’ll become the product itself.

The primary difference between Okja and The Host is that the creature in this film is the victim rather than the aggressor, which sets up a much more traditional emotional dynamic at the center, as Mija goes on a globe-trotting mission to save her best friend. The problem with that is that Bong doesn’t really do straight sentiment, in part because his brand of satire excludes no targets. When the Animal Liberation Front (A.L.F.), led by the kind-faced, naïve Jay (Paul Dano), arrives to interrupt Mija’s one-girl rescue mission, gently yelling (“We are not terrorists!”) at a Mirando Corporation truck driver who refuses to fight back anyway because his company doesn’t provide him with worker’s comp, Bong spoofs, at once, blue-collar job apathy and self-righteous activism. A lengthy sequence soon after mocks A.L.F. further, in particular one of its members who can barely stay on his feet because he’s given up eating entirely for his anti-G.M.O. protest.

Bong’s humorously cynical approach to all sides of this struggle likens Okja to Stephen Chow’s environmentalist action comedy The Mermaid, as does its descent into some unsparing brutality toward the hunted super pigs, but he eventually abandons the broadness of his satire and settles more on a good-guy-vigilante-versus-evil-corporation narrative, back-peddling on more interesting thematic ambitions. It also emphasizes how discombobulated the film feels on a moment-to-moment basis, a tonal dissonance that isn’t helped by interminable scenes (especially the English-language ones) featuring confused-looking actors trying for comedic beats that don’t land. Snowpiercer proved that Bong is capable of bringing his bravura genre chops to contexts outside of his native South Korea, and Okja reaffirms that, but it also suggests that the sarcastic humor of his best films doesn’t translate as well.

The Cannes Film Festival runs from May 17—28.