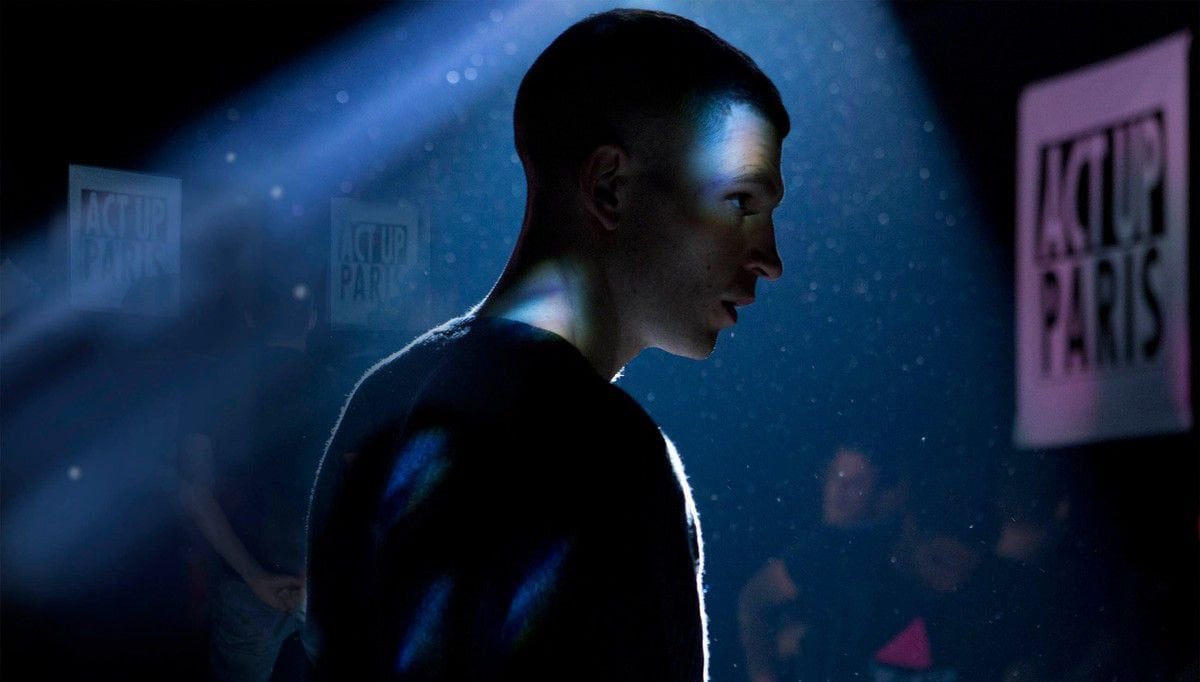 The U.S. title, BPM (Beats Per Minute), of Robin Campillo’s latest effort stresses the film’s main thematic track involving the sense of movement that ACT UP Paris’s members feel they need to sustain in order to see another day. This energy is political, taking the form of protests against pharmaceutical companies whose research, drug trials, even words—assurances that they’re willing to negotiate with the sick—move at a speed that’s a slap in the face to those who have only months, maybe days, to live. But it’s also sexual, a resistance to the ugliness of a disease’s assault on the body, as in a singularly and simultaneously heartbreaking and erotic scene that sees Nathan (Arnaud Valois) beating off his hospitalized lover, Sean (Nahuel Pérez Biscayart), who’s in the final stages of AIDS. For a moment after, as Nathan wipes the ejaculate from Sean’s body and then kisses him, it’s as if Sean will live forever.

Often throughout BPM, Campillo will cut from an ACT UP meeting or a moment of protest to a dance floor that seems less real—say, an actual bar or club somewhere in Le Marais—than imagined. The first time this occurs, it’s almost imperceptible how the filmmaker transitions from the dust that’s kicked up into the air by the dancers’ feet and molecules inside a human body that either react to the HIV virus’s infection. It seems at once inappropriate and perfect to call this a special effect, because on the one hand this isn’t an effect that’s been achieved through the expensive technical wizardry of a Hollywood tent pole, and on the other it’s an impeccably succinct expression of men and women trying to reclaim their bodies, to literally effect change through their special relationship to dance music.

This effect, though, comes to feel redundant by the third or fourth time that it’s been deployed in BPM. Campillo is determined to convey how the body seeks agency, to reimagine itself, on the dance floor. But it’s an idea whose power is progressively dulled every time we’re returned to this space, where the tightness with which the moving bodies are framed and the anonymous dance beats on the soundtrack come to feel less evocative of the intimacy that the film’s characters crave than of budgetary restrictions.

Compositionally, many of the film’s exterior scenes, from marches to shock demonstrations, are similarly constricted, which has the unintended effect of diminishing the scope of what the characters resist: the seeming totality of a city turning its back on the undesirable. And, indeed, it’s precisely the jolt of recognition, specificity, and expansiveness that defines a powerful sequence that transitions from scenes of protest and subsequent dancing, all set to Bronski Beat’s “Smalltown Boy,” that most iconic of songs about traditional culture’s rejection of the homosexual, and an overhead shot of the Seine’s waters running red, almost as a punishment, with the blood of AIDS victims.

In between raids, in between the meetings with ACT UP members and those who hold the keys to their possible survival, BPM is at its most intimate when observing the exchange of war stories. Shortly after Sean kisses Nathan at the site of a protest—a school they break into in order to teach students the sex education that their teachers can’t—they become lovers. Nathan is so smitten by Sean in this moment that he doesn’t notice the teenage boy milling about nearby, so clearly hungry for a pamphlet and to be near someone else like him but too afraid of reaching out. We never see this young man again, yet one understands the possibility of him becoming a Nathan, who avoided being infected by HIV because he fearfully abstained from sex for five years, or a Sean, who contracted the disease at 16 from his very first sexual encounter. When Nathan and Sean share these stories with one another, Valois and Biscayart pitch-perfectly communicate how these men, at least in private, are hard-headed and unsentimental about their lives.

Maybe the reason that 120 Beats Per Minute, the exact English-language translation of the film’s French title, has a better ring to it is because that “120” emphasizes that Campillo’s thematic fixations aren’t as single-minded as his aesthetic ones. For many of the film’s characters, with their constant concern about viral loads and T-cell counts, to live with HIV and AIDS is to be constantly playing a numbers game. (Some musicologists have suggested that people are biologically driven to prefer a tempo of around 120 beats per minute, which is the average for most charting pop hits.)

That number, though, also points to BPM’s triumph as a study of the logistics of successful activism. Much of the film is spent indoors, obsessively steeped in the debate that ACT UP Paris’s members have about the ethical, practical, and logistical implications of their actions. These debates are never less than impassioned, and the anger with which words are sometimes volleyed about here is always understood to come not from a place of hate, but from a place of fear—as in Sean, during a discussion about whether the group should put their hospitalized friends on the frontlines of their protests, screaming to know why his quickly deteriorating body isn’t a satisfactory enough prop.

That the sounds of finger-snapping and hissing throughout these meetings are so intuitively understood as substitutes for the more disruptive clangor of applause and boos, respectively, is just one of the ways that Campillo and co-screenwriter Philippe Mangeot convey how the rhetoric of AIDS activism has evolved in the short years since ACT UP’s founding in New York. That politesse is also the subject of the film and by the end understood as a public voice’s self-preserving weapon that becomes complicated to put down in private spaces, namely the place for mourning fallen comrades in arms.

After Sean’s death, his friends come to his mother’s (Saadia Bentaïeb) apartment to pay their respects. Almost everyone who enters the space is disarmed by how at ease the woman seems in the way she offers them coffee, even food, until they remember the social contract between them as members of a group that’s familiar with death and devoted to the belief that Sean, like so many others before him, left for a reason. The way that grief transitions, ardently and even humorously, to talk of how to politicize Sean’s body feels dance-like even before we return to the club, and the audience itself is forced to remember that the beat, like the war against inaction, goes on.