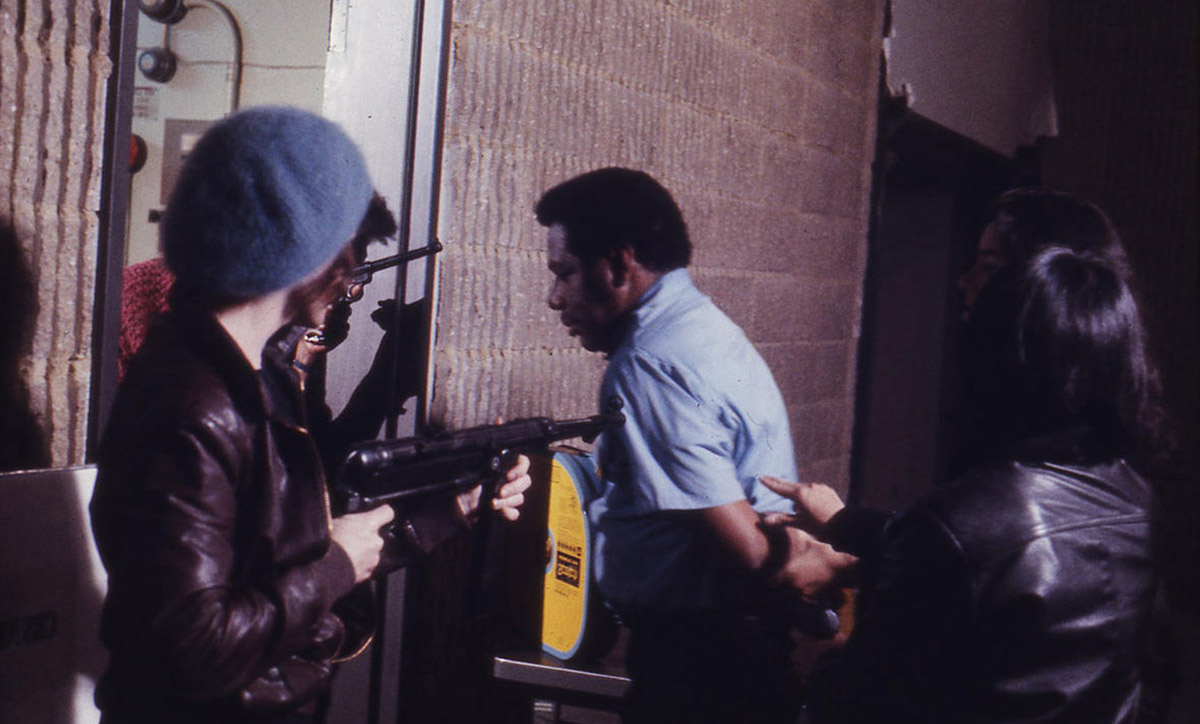 Early into Lizzie Borden’s Born in Flames, two men, both of whom remain off screen and unnamed, flip through photographs of Adelaide Norris (Jean Satterfield), attempting to construct her profile as founder of the Women’s Army. “Homosexual?” one man asks the other. “Yes,” the other responds, adding that the group “seems to be dominated by blacks and lesbians.” As the men start to elaborate, the exchange abruptly cuts to Norris sitting around a kitchen table and talking about employment legislation, though the men’s dialogue bleeds in and overlaps for a few seconds, before being dropped entirely. Such a small detail reveals Borden’s directorial strengths and political cognizance, implicitly placing competing dialogues within the same cinematic space, even though—for the time being, at least—the two parties aren’t in the same physical place. Immediately, and without actual violent conflict, the tensions of making one’s intentions heard and understood are presented without concern for labored thematic exposition.

The choice bespeaks Born in Flames’s fusing of documentary and dramatic sequences into a free-form narrative that exists somewhere between essay film, political manifesto, and exploitation. Scripted scenes of ongoing conversations about organized protests and recent instances of sexism across the U.S. are broken apart by news broadcasts and the didactic pleas of two pirate-radio DJs named Isabel (Adele Bertei) and Honey (Honey). These events occur in an alternative America where a socialist revolution occurred a decade prior, but did little to alter the gender gap or bring about comprehensive social progress. Borden offers little contextual scenes to articulate the imagined past or even the tumultuous present, which likely has to do with the film’s micro-budget, though the futuristic suggestion is merely a pretext for conversations surrounding Marxist counter tactics, like Isabel’s claim to be “rebuilding a warrior nation of guerillas.”

There’s a maddening quality to the film because of its refusal to adhere to traditional channels of communication. Take Isabel’s previous claim, which is spoken with force, but visibly received by no one. That is, much of Borden’s aesthetic entails numerous speakers or messages being sent, but little indication of how those messages are being decoded. Such repetition breeds a fractured rapidity, which could be mistaken for incoherence or a lack of ability on Borden’s part. But a certain level of incoherence is part of the film’s coherent understanding of the multitudinous channels of communication bred by competing political rhetoric. In one of the film’s several montages, always accompanied by Red Krayola’s title track, Borden cuts between radio and television broadcasts, interspersed with speeches at various rallies, continuing to overlay message upon message, with little indication or instruction as to which course of action should be privileged over the other.

Not that Borden lacks a radical political viewpoint. Quite the contrary, especially as the consistent binary opposition for the Women’s Army as “Terrorists or Revolutionaries?” troublingly suggests neither term to be a functional diagnosis for group actions within a consistently reshaping socio-political milieu. The film also uses the conflicting terms to suggest that media outlets only highlight oppositional actions to sell ambivalence and fear to consumers in the first place. Chi-raq recently made similar suggestions about gender inequality, but did so through the more satirical mode of melodrama and Afterschool Special. Born in Flames, like some of Spike Lee’s best work, thrums with an emblazoned interest in addressing ongoing human rights concerns through zeitgeist-infused pop, though Borden’s approach omits explicit references to actual events, placing in its stead more philosophical rhetoric that hangs over the film like a darkened cloud that has the potential to explode with thunder and lightening at any point.

In fact, given that Born in Flames concludes with an actual explosion, it balks at finding a less literal end for its incendiary politics by promoting a similar brand of ambivalence regarding political procedure that Borden seemingly castigates media outlets for. However, Borden’s strengths as an artist lie not in subtle narrative textures, but generating intensive responses to injustice. No wonder, then, that author Howard Hampton borrowed the film’s title for his 2007 monograph on “termite dreams, dialectical fairy tales, and pop apocalypses.” Born in Flames defiantly occupies all three spaces at once.