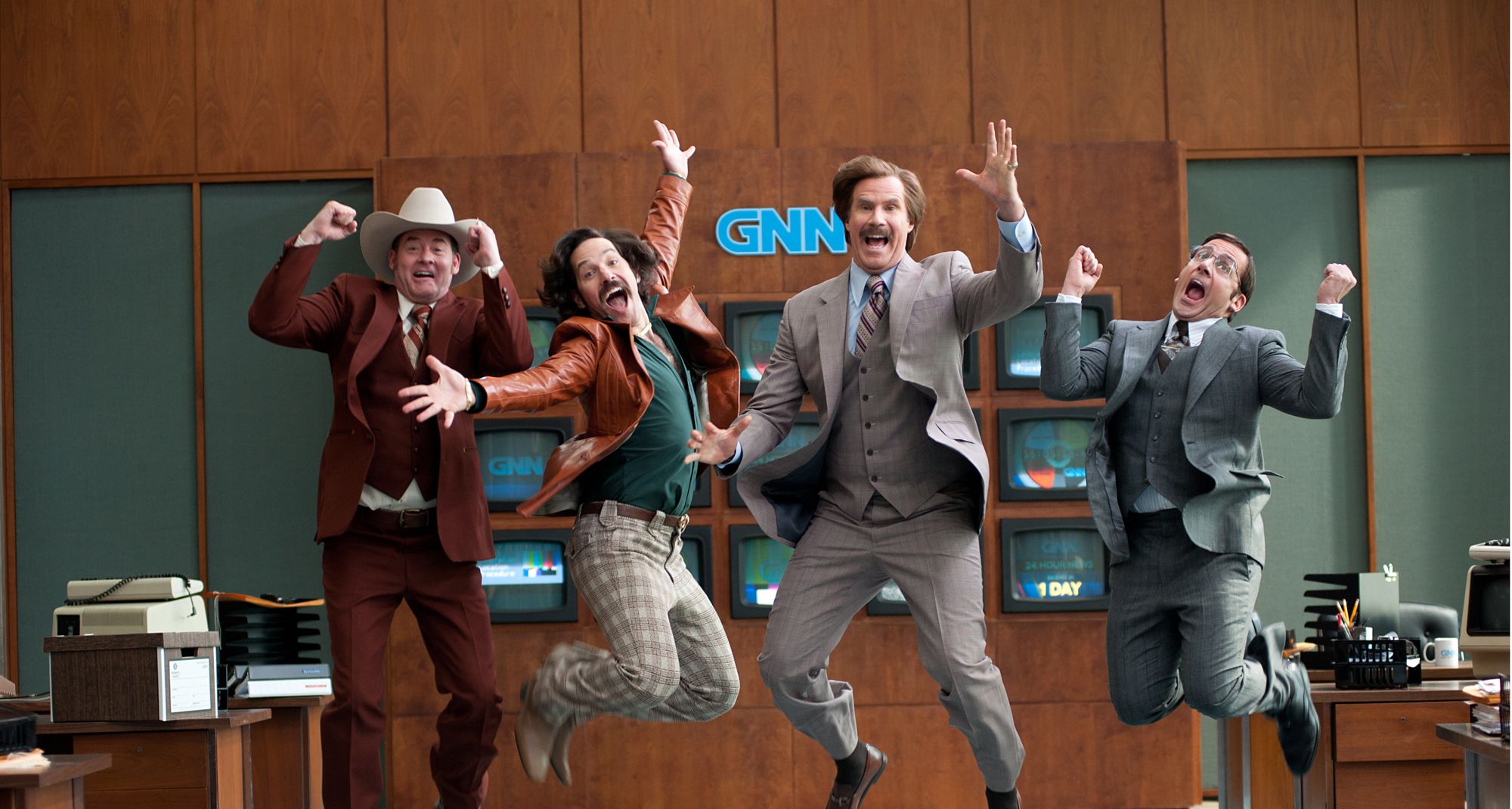 Anchorman 2: The Legend Continues begins with the epically mustachioed Ron Burgundy (Will Ferrell), now a celebrated newscaster in New York, getting swiftly emasculated, as his wife and co-anchor, Veronica (Christina Applegate), is chosen over him to replace lead nightly news anchor Mack Harken (Harrison Ford). Fired from his job and estranged from his family, Ron spends six months shuffling through nightmare gigs before he’s given the chance to rejoin his previous news team—Champ (David Koechner), Brian (Paul Rudd), and Brick (Steve Carell)—at Global News Network (GNN), a new 24-hour news network. It’s a dull setup, and once the news team assembles for their first broadcast at GNN, the film settles into a familiar rhythm of hit-or-miss episodic sketches, faintly strung together by a flimsy plot. For the fans, Champ’s “Whammy!” screams, Ron’s awkward emotional exclamations, and Brick’s existence-as-dross are all dutifully recycled, but utilized to severely diminished effect.

When Ron sees his team’s graveyard shift as an opportunity to create an American-centric news bonanza, there are a few solid yucks to be had, such as when the news team defies their overseers by smoking crack and mulling over the best vaginas of all time on the air, causing GNN ratings to soar. But director and co-writer Adam McKay doesn’t let any of these comic scenarios build or stretch out, even with a cast overflowing with formidable improvisers. Instead, the film is hampered with an unfortunate romance between Ron and Linda (Meagan Good), his African-American boss, a plotline that swings wildly for desperate and familiar controversy. Much like winking hyper-misogyny proved the lynchpin to the robust humor of Anchorman: The Legend of Ron Burgundy, feigned racial insensitivity and strident nationalism serve as the cornerstones of this limp comedy, along with more misogyny. The blithely careful tone of the jokes that spur from these ideas is merely the most reprehensible element of this bloated, unwieldy fiasco.

As the story drags on, it becomes Ferrell’s show almost entirely. The film proceeds into a unique but off-putting realm of nonsense that’s tinged with a tinny sentimentalism, and one that marginalizes the supporting cast, including James Marsden, Greg Kinnear, and Dylan Baker, along the way. Even the climactic all-out anchor brawl, replete with cameos from Kanye West, John C. Reilly, Sacha Baron Cohen, and Jim Carrey, among others, feels limited in scope, as the absurdity of the fight is grounded by Ron’s need to—no kidding—make his son’s piano recital. And like the view of politics in Jay Roach’s superior The Campaign, the film’s half-hearted plea for responsibility and ethics in the news, after joyfully rolling around in its corruption for the majority of its runtime, smacks of plain pandering.

Where the cast played delightfully off of the film’s simple central conceit in the original, the sequel seems to confine the playful performances to a plot that’s engineered to overtly venerate the resilience of the American family. It limits the energies of the myriad comedians, who are inarguably the only noteworthy element of the film. Rather than continue to plumb the manic, perverse creatures within their afforded, rigid archetypes, the actors now seem to simply be hitting their marks, passing through each comic scenario instead of digging in. One of the most memorable gags in The Legend of Run Burgundy involves Ron saying whatever is on the teleprompter, including small and major errors. Anchorman 2, naturally, repeats this joke, but the filmmakers don’t seem to get it: that their sequel comes off like a similarly mindless recitation of old jokes, older ideas, and ancient news.

Box Office Rap: Anchorman 2: The Legend Continues and the 2013 Wrap