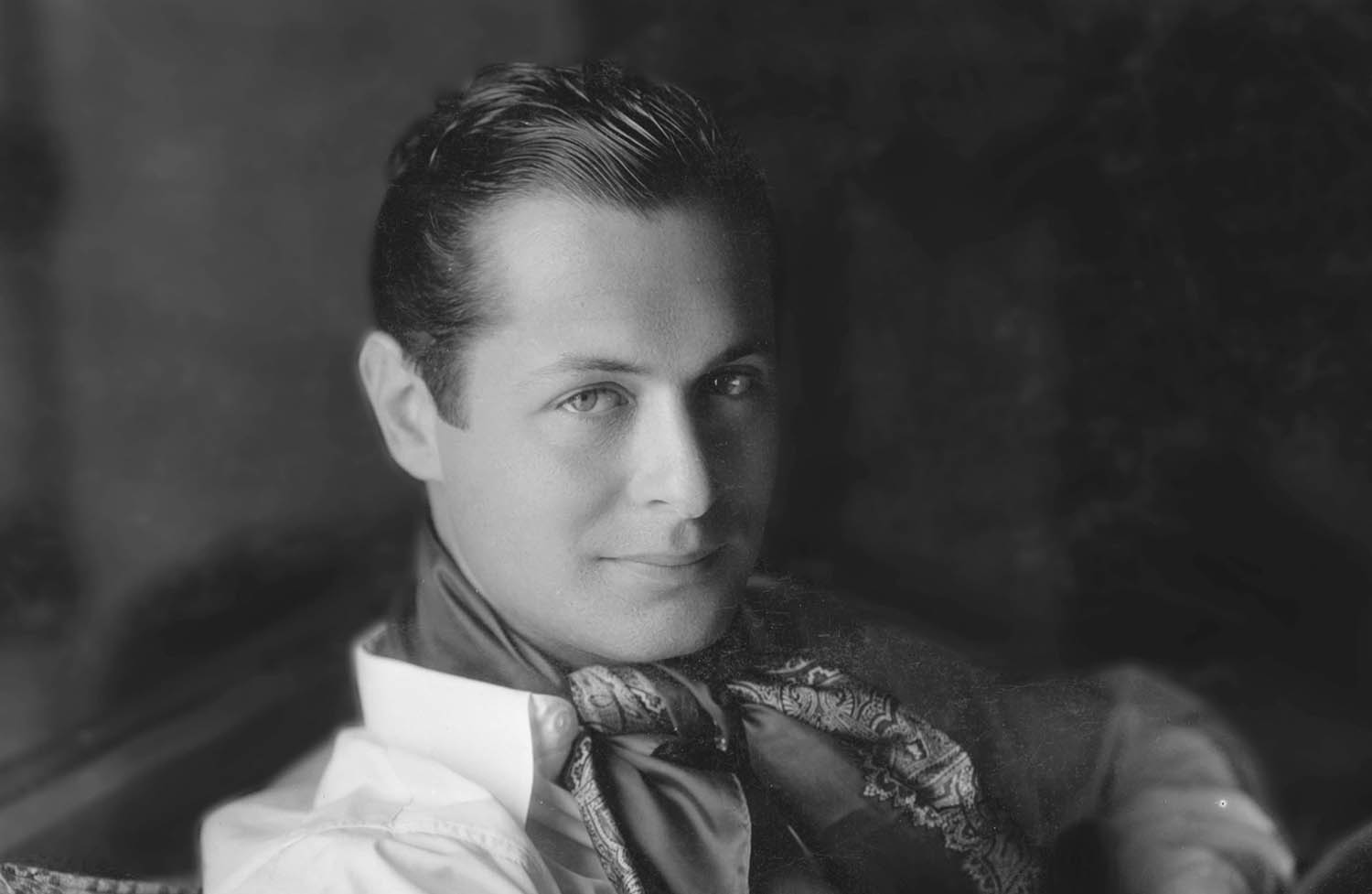 A reliable film presence of the thirties, Robert Montgomery was locked in a “support the female star” vise at MGM for many years. Mercilessly typecast by his studio, he always seemed to be in the drawing room, mixing cocktails and blandly grinning like the cat who ate the canary; he worked six times with Joan Crawford, five times with Norma Shearer and one miserable time with Garbo in a threadbare picture called Inspiration (1931), where he unaccountably seemed mortified to be in her divine presence. Toward the end of his tenure at the studio, he was allowed to direct a movie, Lady in the Lake (1947), a Raymond Chandler adaptation told entirely with a subjective camera from the point of view of detective Philip Marlowe, and this gimmicky “I am a camera” device was just as silly as Montgomery’s “tough guy” accent as Marlowe. Cast as racketeers in The Earl of Chicago (1940) or Hide-Out (1934), MGM’s glossy idea of gangster pics, Montgomery was not convincing, but have him play a well-dressed, tippling, high class jerk and provide him with some bright remarks, and he would be sure to steal plenty of scenes as a friend with benefits to a straying leading lady.

His face was boyishly cute, even as he began to show his age in the early forties, and his characters strategically used their cuteness. He’d widen his eyes like saucers, purse his lips into a naughty smile and then make his face a blank until he got what he wanted; if he was displeased, he’d crinkle his whole face up as if he’d tasted something nasty. A bit callow in his first movies, Montgomery learned as he went on to really listen to what was being said on screen and let it affect him; he had a trick in group scenes of swiveling his head back and forth as if he might have missed something, a sure-fire attention getter. It could be said that he played the roles that Cary Grant would later make his own past 1937, but he was actually closer in temperament to Rex Harrison, a bit shallow, yet perfect for high comedy. If he hadn’t gone into retirement in the fifties, he could have played Henry Higgins, or other Harrison roles; instead, the enterprising Montgomery started to direct for the theater, and even took a job as President Eisenhower’s image consultant for television appearances. He himself said that of his sixty odd movies, only three or four really satisfied him, but those few are worth remembering, along with the steady dues-paying he put in with MGM’s female luminaries.

1. Private Lives (1931): In this excellent adaptation of Noel Coward’s play, Montgomery’s brittle manner and romantic skepticism found its most ideal context. Coward’s Elyot is a man for whom style is everything, and Montgomery gives a triumphantly right reading of many of the classic lines: “Worst possible taste!” he crows, over a supposedly tacky bracelet a male admirer gave his ex-wife Amanda (Norma Shearer). He doesn’t seem English, really, but he’s terrific at spitting out the well-worn words and giving them a real tension and sense of attack, and he makes Elyot’s slow burn very funny in his big fight scene with Amanda, highlighting the spoiled child underneath this man’s adult hauteur. It might be said that this material is in some ways actor-proof, but Montgomery puts his own bratty stamp on it: Watch for the moment when he calls Amanda a “slattern,” then tops that with, “yes, slattern and fishwife,” followed by a hilarious little “nyah-nyah” moue.

2. Riptide (1934): This polished Norma Shearer movie begins well but soon gets lost in recriminations and noble renunciations; before that happens, in the first half-hour, Montgomery does one of his archetypal drunk playboy characterizations. He’s done so many of them by this point that his playing has attained a deadpan edge that feels modern; there’s a Robert Benchley quality to him here, a kind of Algonquin Roundtable wryness, but there are also moments when he suggests an idle rich Bill Murray, a slacker who uses sarcasm and liquor hi-jinks to cover his obvious despair. Trying to seduce Shearer at a party, Montgomery fully sells a pretty speech about the joys of hedonism, lyrically extolling the idea of staying up all night drinking with someone you love, then going to bed when everybody else is waking up. It’s only a movie-ish dream, this sort of thing, but Montgomery makes it sound almost attainable.

3. Night Must Fall (1937): No one at MGM thought that lightweight Montgomery could pull off the baby-faced killer lead in this adaptation of Emlyn Williams’ hit play, but he surprised everyone and delivered a sinuous performance that still holds up today as a psychologically accurate portrait of a criminal mind. As Danny, an insolent wheedler and seducer of elderly women, Montgomery speaks in a soft Irish accent, and everything about him here seems soft, from his voice and manner to his loose, sensual body; he literally saunters around rooms, a cigarette dangling suggestively from his mouth. In one shot, when he’s stroking a cat, Montgomery lets his “good boy” mask drop and an alarming, corrupt satyr is revealed; his “blank” look, familiar from dozens of other movies, stands in quite nicely for this man’s creepy lack of feeling. When he calls Rosalind Russell’s character “repressed,” Montgomery perfectly catches the sense of an uneducated man reaching for a word he’s heard somewhere, and this attention to subtle detail infuses the whole performance. At 116 minutes, this is a movie that really bothers to take its time to give you a certain mood of building sexual tension, and the pay-off for this patience comes in the last scenes, where Montgomery freaks out in a very raw way. When he’s hand-cuffed by police, he sinks to a chair and bangs his bound hands over and over again against his knee, a punishing, upsetting gesture that lets us know how far Montgomery has gone in his pursuit of the dark side of his usual heartlessness.

4. Mr. and Mrs. Smith (1941): Alfred Hitchcock was the unlikely director of this low-key but suggestive romantic comedy, in which Montgomery finally played with a farceur on his own level of excellence, Carole Lombard. He and Lombard stress their characters’ sexual desire for each other as they play heartfelt games of marriage and attempted re-marriage, and Montgomery has one virtuoso scene of physical comedy. Stranded at a nightclub with a low-class date, in full view of Lombard, Montgomery turns to a beautiful girl next to him and starts to mouth sweet nothings at her, getting more and more animated until her date intervenes. Desperate for some way out of the situation, he starts to bang his nose in order to give himself a nosebleed, at first gently, and then with increasing violence, only to be humiliated when his coarse date makes a spectacle of his situation in front of the whole club. Eying the never-more-delectable Lombard, Montgomery is at the peak of his droll comic inventiveness.

5. They Were Expendable (1945): During World War Two, Montgomery was a PT-boat commander and eventual winner of a Bronze Star. On returning from battle, he made his best film, John Ford’s elegiac tribute to grace under pressure among a group of naval men in the Pacific. Older here, Montgomery’s face has hardened a bit, but still looks improbably boyish at times, and he quietly stands up to the full star power of John Wayne, even if Ford’s dramatic lighting sometimes does all the acting for him. He’s nearly unrecognizable as the MGM playboy; his eyes have started to look a bit sad, and even his famous smirk is muted. Montgomery is playing a man who has to keep his calm amid tests both large and frustratingly small. In his last scenes, this MGM staple looks all worn out, with stubble on his face, and that inelegant stubble acts as a sort of last “nyah, nyah” to studio head Louis B. Mayer and to a film career that too seldom gave him the kind of material he could score in.