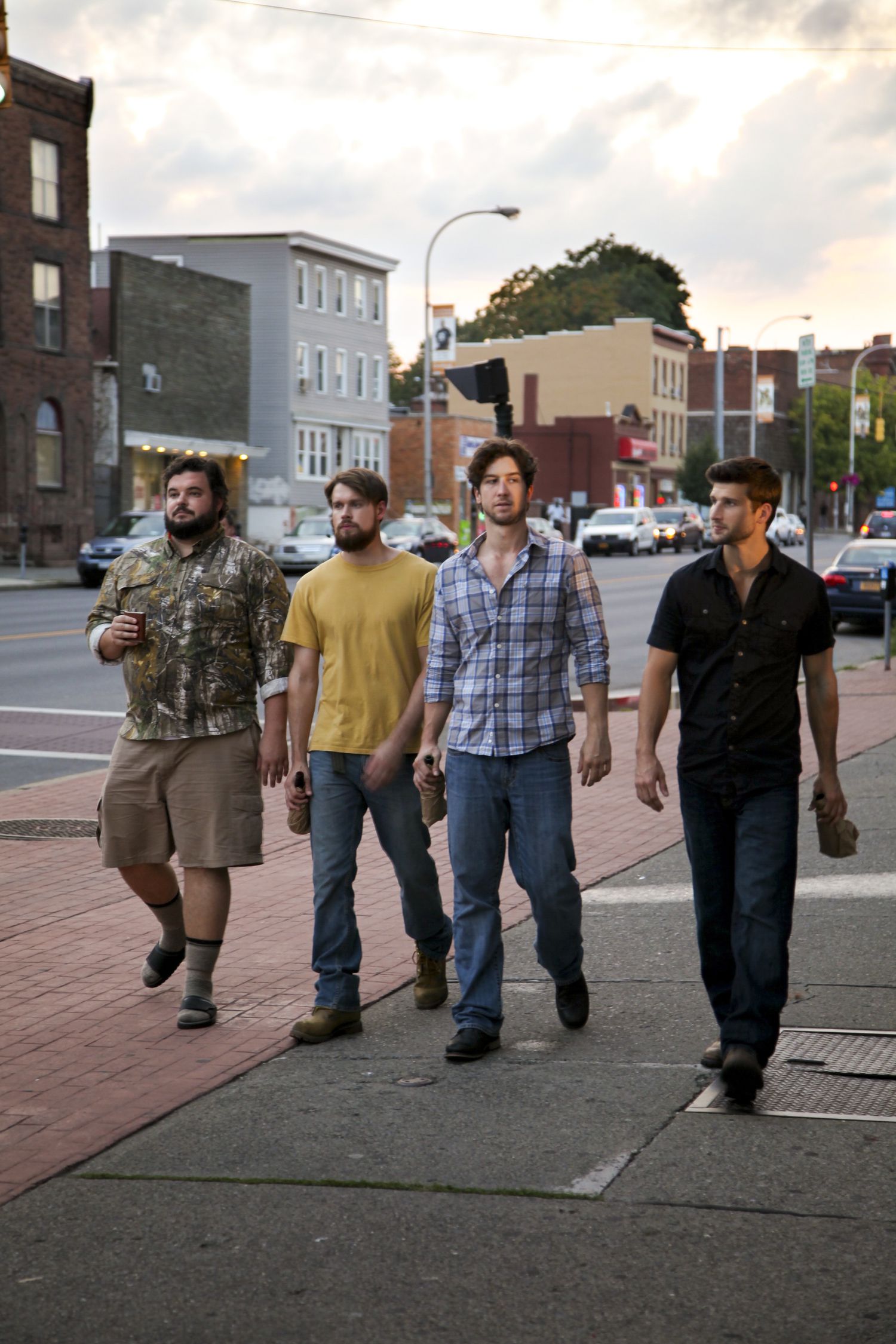 Gay panic reigns in Andrew Nackman’s 4th Man Out, a cheerfully oblivious comedy set in an upstate New York town that globalization and, seemingly, the past 20 years of popular culture have passed by. Amid a patchwork of baseball fields, American flags, and decrepit factories, young auto mechanic Adam (Evan Todd) plans to come out to his three best friends on his 24th birthday. But his intentions are thwarted by the raging hormones and casual homophobia of his buddies until the following morning, when Adam wakes up and comes out to best friend Chris (Parker Young) in a hungover whisper. Chris immediately lurches awake and vomits.

4th Man Out means to be self-effacing, underlining the ignorance of three straight dudes in the wake of their friend’s sexual awakening, but the film is persistently aligned with the latent homophobia of its small-town setting. In a key, repeated image, the straight dudes stew on a couch as Adam, set aside in an easy chair, tries to conjure up some bygone bonhomie. Supporting characters heighten the film’s discomfort with gay culture, as screenwriter Aaron Danick uses the story’s blue-collar setting to embrace a set of antique stereotypes: a nosy, pious neighbor (Brooke Dillman) delivers a cake shaped like Jesus along with a pamphlet for conversion therapy, and Adam’s first few dates include a series of embittered token gays and an oily, married pervert relentless in his attempts to bring Adam down to his basement. (His first halfway successful date ends with a confusing fart joke.)

It’s a bizarre and retrograde spectacle, as clueless and incurious about friendship as it is about the rudiments of composition and screenwriting. Adam’s friends seem to lack jobs and interests, they make reservations for lunch at Cheesecake Factory, and they seem to be his roommates until various plot points suggest they might have homes of their own. Nackman’s compositions have a similar sitcom-meets-Sundance vernacular: A bar scene that crosscuts between two conversations is nearly incoherent, underlining the director’s discomfort with spatial dynamics and bodies in motion. His most filmic idea is a workout montage that’s somehow meant to signify his character’s growing ease with Adam’s new sexual status. (It mostly serves to showcase the ripped physiques of Nackman’s cast, save the token fat friend with a disproportionately attractive girlfriend.)

In the thick of this unyieldingly regressive comedy, Adam is a limp protagonist, scantly sexualized and unnecessarily sensitive to the panic of his friends. Adam is so docile and undeveloped that the film blithely bestows all of its rom-com conventions upon Chris, the sexy metrosexual who’s looking to abandon his fuckbuddy (Jordan Lane-Price) and find true love. Chris’s romantic travails reinforce the idea that 4th Man Out is less about how it’s okay to be gay than about how it’s okay to be straight and have a gay best friend. The film even manages to fumble this idea, adding a third-act wrinkle to Chris and Adam’s relationship that’s left strangely unresolved. It’s a cowardly finish to a work that should only be of interest to anyone who’s been in a coma since the Clinton administration.