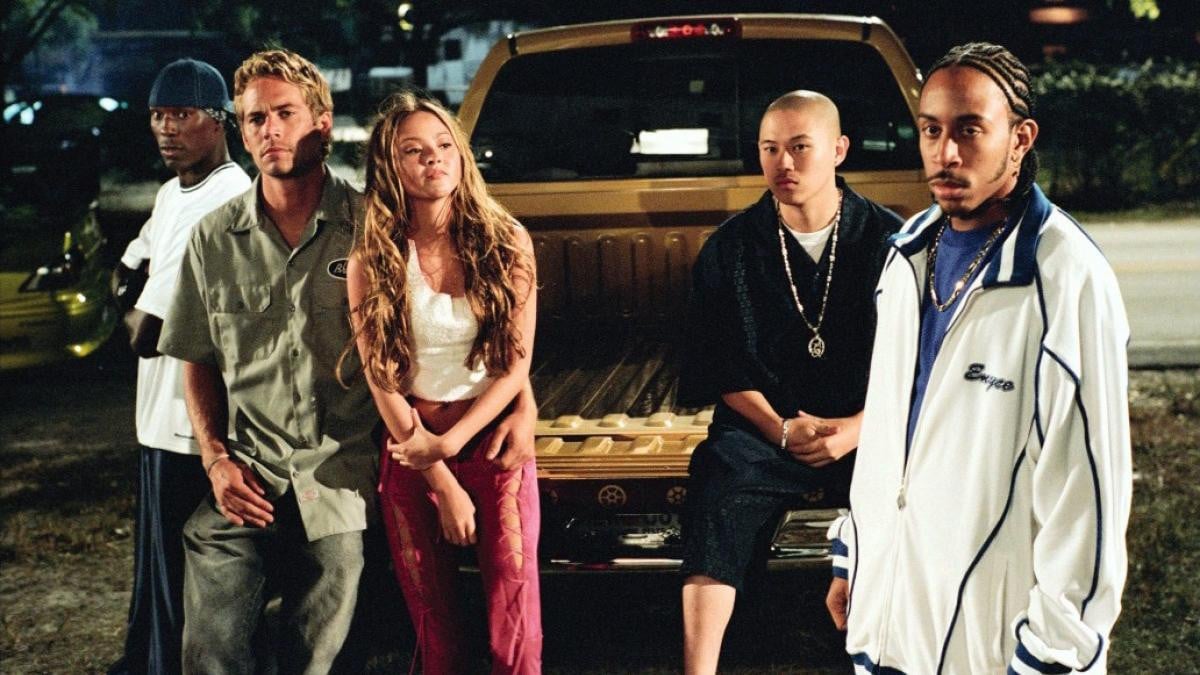 Vin Diesel was offered the lead role in 2 Fast 2 Furious but turned it down. For this he earned the label “difficult actor” and a stigma of ingratitude followed him around for years (as well as a couple of box office flops). But watching this sequel, perhaps he was correct in simply walking away. One would perhaps admire this seeming integrity more if he hadn’t shown up for the fourth Furious film in a desperate act of career resuscitation—a colleague recently referred to him as “the Gretchen Mol of action movie stars” in that he never quite lived up to the hype.

At the start of 2 Fast 2 Furious, Brian is a street racer in Miami and on the run from the police (who, as we all know, he used to work for until he did some aiding and abetting of a known criminal by letting Vin Diesel’s character ride off into the sunset). Director John Singleton works overtime trying to set up the coolness factor for Paul Walker, filming him in wide shots and keeping him in the shadows until he arrives at the race, his car spinning into the frame and parking neatly so he’s framed in a medium close-up hero shot. While Paul Walker is undeniably a handsome actor, he doesn’t have the requisite bad-ass and/or lone tough guy qualities of Steve McQueen. Without Vin Diesel to counterbalance him, 2 Fast 2 Furious lacks a center.

Walker has always been believable as a fundamentally decent guy who loves cars and is interested in being part of something bigger than he is, but that makes him a curiously soft actor. That’s fine when he’s playing second fiddle to someone as charismatic as Diesel, but more problematic when he’s asked to carry a film. The opening race scene is visceral, there’s a sense of speed and high energy as the colorful vehicles, all tricked out and ornamental, whiz through the neon-streaked Miami streets, but ultimately the scene exists to show that Paul Walker is still a winner—the best of the best—and we know in our hearts that it just ain’t so.

To compensate for this lack, the sequel introduces a super-sexy undercover agent (Eva Mendes)—who flirts with Brian when they make a high speed drive along the highway while having a staring contest at each other’s mega-beauty—and a “best friend” character in Roman Pearce. Roman enters the film during a dust-bowl racing scene and comes off as what he is: A seriocomic stereotype of the “black guy sidekick.” He spouts a few one-liners, doesn’t get the girl (or anywhere near the girl), swaggers around flexing his biceps, and occasionally takes his shirt off, inspiring Brian to say such memorable lines as, “I got something for your ass!” and “Put your blouse back on!”

While Tyrese Gibson, like Walker, has an easy charm about him, the duo can’t help but feel like lightweights. 2 Fast 2 Furious is about the dynamism of speed, and the cars sure are pretty—and when they kick the nitro, the street lights transform into a laser light show and the sound design is a symphony of revs and purrs, shifting throttles and humming engines. Gear heads won’t be disappointed. To those who are turned on by the appearance of a 1969 Yenko Camaro, you’re in for a treat during a nighttime race sequence in which characters and cars barrel through the curvy streets of a warehouse district.

But films aren’t built on sexy motors alone, and when the two heroes start getting into the mincing arguments of an old married couple (“You’re always getting in trouble over a female, Brian!”), the banter quickly grows tiresome. I wonder if there might have been some additional heat if Eva Mendes had been cast as Walker’s racing partner instead of Gibson, or maybe Asian-American model-turned-actress Devon Aoki, who plays a racer who seems most comfortable in a skinny two-piece bikini. At least then the dialogue scenes would have a more charged, less gay-panic themed sexual heat.

We don’t go to movies like 2 Fast 2 Furious for the intricate plotting or the detailed character development; we go for the octane. A handful of moments tap into the joys of pulp melodrama, such as when a detective (Mark Boone Junior) gets tortured by having a rat in a steel bucket placed over his chest (the villains heat up the bucket until the rat starts gnawing at him—amazing that such a scene gets past the censors!) or when, in a glorious Dukes of Hazzard-like stunt, a racecar careens over a bridge in order to make a precise head-on collision with the bad guy’s mini-yacht. But all too often, 2 Fast 2 Furious loses sight of the B-movie pleasures this series lives and dies on. There’s the old argument that you just want to shut your brain off with this kind of movie and enjoy the spectacle, which is fine as long as the filmmakers are keeping their own eyes on the road.

In the Land of the Auteurists: Late Howard Hawks vs. Prime Julien Duvivier

Flashback: The Fast and the Furious