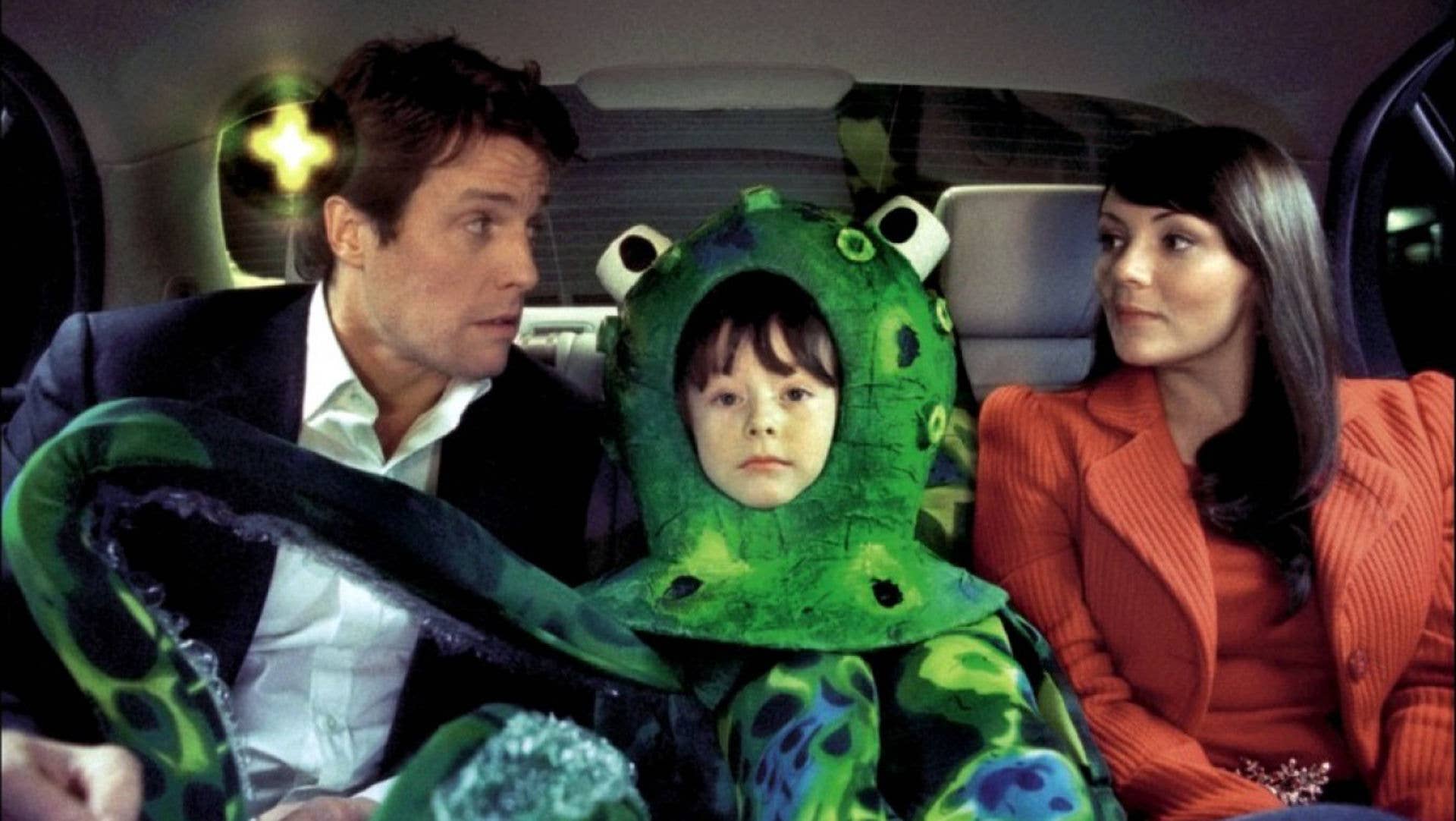 I’ve been a Richard Curtis fan for years now. Upon seeing my first episode of the incredibly witty Blackadder, I never looked back. (Full disclosure: Curtis’s Bean was never my cup of tea, but it apparently falls under the “You can please some of the people some of the time” category, and certainly the concept shows the man’s versatility.)

Curtis’s first foray into film was 1989’s The Tall Guy, a movie that also marked my first encounter with Emma Thompson. If you’ve not seen The Tall Guy, you must, as any movie featuring an extensive series of sequences depicting a musical stage adaptation of The Elephant Man (called Elephant!) is well worth your time. Even as far back as this early effort, a key element of Curtis’s transatlantic success is present: an American (Jeff Goldblum) and a Brit (Thompson) falling for each other and having to work it out.

But The Tall Guy didn’t exactly set the film world on fire. No, Curtis would have to wait until 1994, when a little movie called Four Weddings and a Funeral grabbed the attention of filmgoers and ended up snagging Oscar nods for Best Picture and Best Screenplay. Much of the film’s success in the States was due to it showing a different and more realistic slice of the contemporary U.K. life. This wasn’t a stiff period piece about Ladies and Lords, but a goofy, sweet story about a group of friends, another key element of Curtis’s success. In 1999, Curtis unveiled Notting Hill, which felt as if the ongoing formula was turning stale.

To be fair, Notting Hill’s about 75% hit and 25% miss, yet Curtis must have known that his next project was going to have to offer up something a little different, while still sticking to what he does best. He not only wrote 2003’s Love Actually, but settled seemingly effortlessly into the director’s chair for the first time in his career as well.

Love Actually actually is the greatest modern Christmas movie. Why? Well there are a host of reasons spread out among its stellar all-star cast and popping pop soundtrack, but actors and tunes do not a great flick make. No, Love Actually’s success is owed mostly to Curtis’s alternately sweet and salty pitch-perfect screenplay. I like my Christmas fare a little off-kilter from as far back as Gremlins and The Ref, and if you’re like me, then maybe Love Actually fits into your Christmas schedule as well.

“Anything that is wrong with a film will come back to haunt you forever, so I take a long time writing, fix everything, underline bits that I thought were funny when I first thought of them because they won’t be funny when I look at them later. Oh, and I put the word ‘fuck’ in a lot.” – Richard Curtis

1. A couple marry in a ceremony that looks to be not much different than an average wedding (well, except that the couple in question are played by the physically perfect Keira Knightley and Chiwetel Ejiofor). After the I do’s, a choir and a wedding singer (Lynden David Hall) appear in the church balcony (much to the surprise of the bride and groom) and begin singing “All You Need Is Love.” Then the strings come in. And then one group of instruments after another pops up amid the spectators, until an entire symphonic band is filling the church with lovely, lovely Beatles. Why don’t I ever get invited to weddings as entertaining as this? Later on, the groom’s best friend (Andrew Lincoln) reveals his true feelings in a silent night scenario that’s one of the film’s many highlights.

2. The storyline involving two porn-star stand-ins played by Martin Freeman and Joanna Page. The pair spends the bulk of their screen time in the buff and yet there’s never a single moment that’s even remotely seedy. In a film that’s full of sweetness, how is it that these two seem to be the most innocent? A scene in which Freeman is directed to grab Page’s breasts is made safe by him rubbing his hands together to ensure his co-worker isn’t startled by any undesirable coldness. In the end, and after having been subjected to all manner of seemingly humiliating scenarios, Page declares, “All I want for Christmas is you,” which echoes one of the hit pop songs that emerged from the film.

3. If the Freeman/Page storyline is the most innocent, perhaps the story of Harry (Alan Rickman) and Karen (Thompson) is the darkest (in a movie that’s not really dark at all). Harry is wooed by his devilish secretary (Heike Makatsch) at the most in opportune time of the year. It’s understandable as his wife, Karen, doesn’t seem to have much time for him as she’s busy being a mom to several kids. She believes he’s bought her a present in the form of a heart-shaped necklace, which he actually purchased for the secretary. The sequence in which Karen discovers the truth, excuses herself from the family, and goes to the bedroom to fall apart is heartbreaking. For maybe a full minute the camera stays on a wordless, emotional Thompson while Joni Mitchell provides the narrative through “Both Sides Now.” A bonus moment that gives this storyline a much-needed comic break involves Rowan Atkinson “helping” Harry with his purchase of the necklace.

4. The relationship between widower Liam Neeson’s Daniel and his stepson, Sam (Thomas Sangster), is in many ways the backbone of Love Actually. For the amount of time spent on the duo, their story may be the most simplistic, yet there never seems a wasted moment. Daniel worries that the recent death of Sam’s mother is causing him to be withdrawn. When he discovers the truth, their situation is choreographed early on:

Sam: I know I should be thinking about Mum all the time, and I am. But the truth is I’m in love and I was before she died, and there’s nothing I can do about it.
Daniel: Aren’t you a bit young to be in love?
Sam: No.
Daniel: Oh, well, okay, right. Well, I mean, I’m a little relieved.
Sam: Why?
Daniel: Well, because I thought it would be something worse.
Sam: Worse than the total agony of being in love?

Ain’t that the truth.

5. Hugh Grant is the new prime minister. Natalie (Martine McCutcheon) is the object of his affection. Together they’ve no idea how to get together. Grant has been the ideal outlet for Curtis’s scripts since Four Weddings and a Funeral and his work here is no different. When he asserts his prime minister-ness against Billy Bob Thornton’s U.S. president (a character who combines the worst aspects of Clinton and Bush), Grant does a dance throughout 10 Downing Street to the Pointer Sisters’ “Jump for My Love.” I’m certain that no other actor could have pulled this off as successfully as Grant does. And his voiceover speeches about airports and love that bookend the film capture the essence of the film.

6. Jamie (Colin Firth) falls in loves with his Portuguese maid (Lúcia Moniz)—only problem is, neither speak the other’s language. When they must say goodbye, he travel’s back to England and learns Portuguese, and then returns to ask for her hand in marriage, only to discover that she, too, has learned his language. Is the scene where the pair romp around in an ice cold lake scrambling to save his novel the highlight of this tale? Maybe. But I’m also fond of the unrelated scene where Jamie’s nieces and nephews cry out, “I hate Uncle Jamie!,” as he exits his family’s Christmas gathering to head for Portugal.

7. When Love Actually came out, many critics complained that the stories were spread too thin and that some didn’t even have proper endings. The most frequently cited was that of Laura Linney’s character, Sarah. She yearns for the love of handsome co-worker Karl (Rodrigo Santoro), but is unable to make even a one-night commitment to him. But Karl is not Sarah’s love; the love of her life is her brother, who’s committed to an institution. Sarah drops everything for him, anytime he calls. It may not be the happiest story in the movie, but it’s probably the most real.

8. If Sarah’s story is the most realistic, then the story of Colin (Kris Marshall) is the silliest Christmas wish come true. He wants to get laid and realizes it’s never going to happen to England. But in America his accent will be appreciated. So he flies to Wisconsin and heads straight for the nearest dive bar. There he meets a quartet of babes who live in a tiny apartment and are embarrassed to ask if he’d mind sharing their one bed for the night.

9. Every single scene with Bill Nighy’s faded pop star Billy Mack and his manager is a keeper, and despite having no relation to any of the other stories, they never seem remotely out of place.

Billy Mack: Here is an important message from your Uncle Bill: Don’t buy drugs. Become a pop star, and they give you them for free!

10. The selection of deleted scenes on the DVD is the ribbon on an already eloquently wrapped package. Normally, deleted scenes are the type of stuff that you watch and think, “Ah, I see why they cut that.” The same can probably be said of this handful, but I always wonder what Curtis’s original assembled cut (which he asserts was three-and-a-half hours long) might have been like. Keep an eye out in the movie for the poster behind Sarah’s desk, which is given new meaning by one of these scenes. It proves that love actually is all around, and not just in the U.K. or a dive bar in Wisconsin.

Review: The Killing of John Lennon