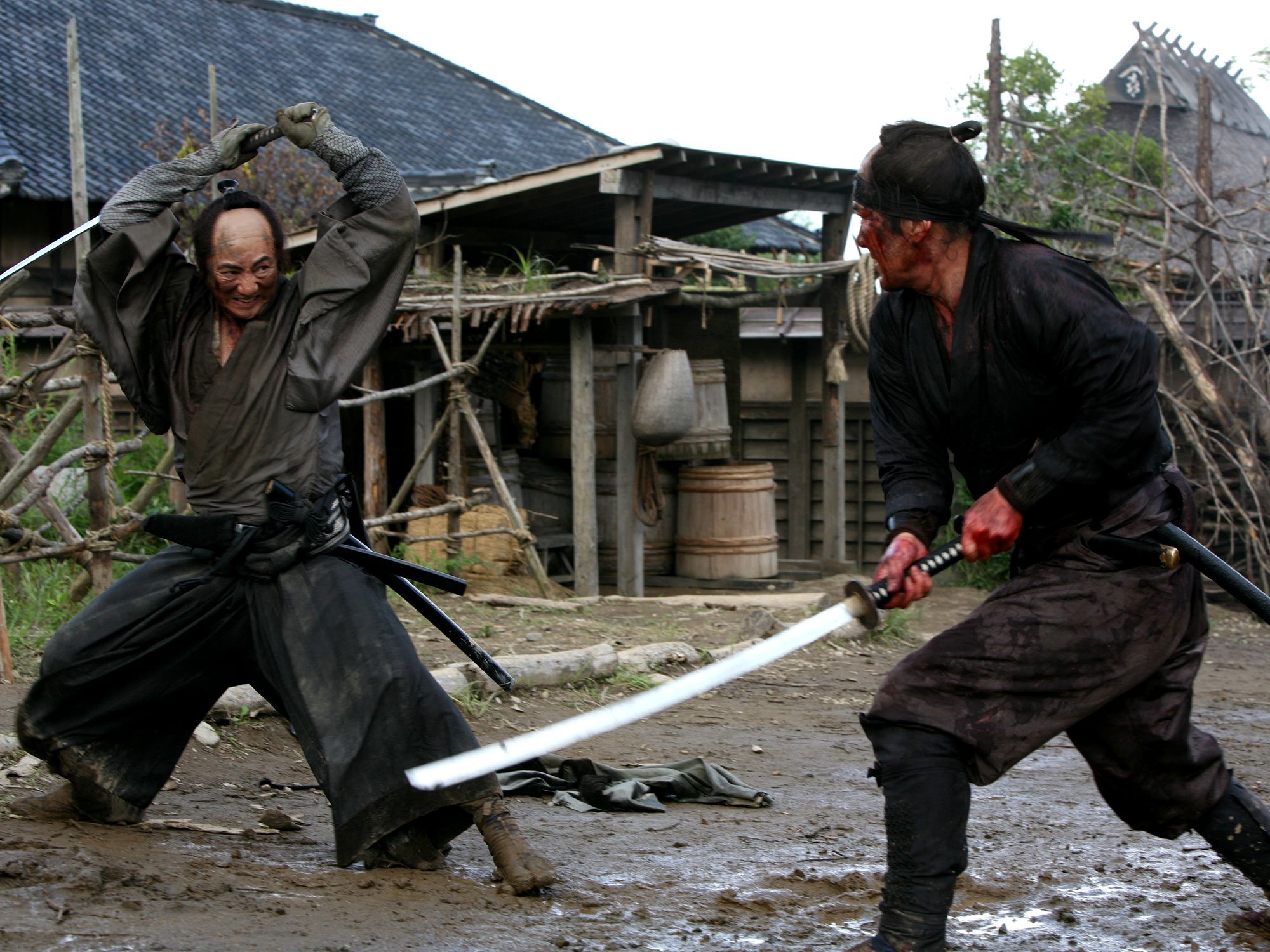 Takeshi Miike’s unstoppable 13 Assassins offers one essential credo: The pen is not mightier than the sword. Written and spoken words offer refuge for treasonous personnel wishing to destroy long-gestating peace, and only honorable action can break through the façade of discourse and unmask the nefarious deeds bubbling underneath. So in the vein of The Dirty Dozen, Inglorious Basterds, and every other “men on a mission” film, the titular samurai of Miike’s action period piece take up arms and become a vengeful collective of impassioned professionals, using their skill, wisdom, and preciseness to formulate a daring assassination attempt on evil government official named Lord Naritsugu (Goro Inagaki). The target will be guarded by a legion of skilled soldiers and the small but determined group whole-heartedly understands that theirs is a classic suicide mission. But you’d never know it from the men’s classic exchanges based on respect, moments that both align us with their singular goals but also deepen our empathy for their layers of human complexity.

Considering Miike’s concise focus on moral purpose through violent expression, it’s not surprising that 13 Assassins begins with a singular act of physical self-sacrifice. Enraged over Naritsugu’s impending appointment to the shogun’s influential council, a beloved samurai commits seppuku, ripping out his innards as an extreme act of protest. Miike stages the scene in a brilliantly confrontational way, forcing the viewer to digest the sounds, facial expressions, and color defining the brutal act, all within a crisp mise-en-scène. From here, a noble swordsmen named Shimada (Kōji Yakusho) becomes incensed at the tales of Naritsugu’s unflinching heinousness, finally committing to the cause after one official brings a recent torture victim to his doorstep. While the limbless woman squirms on the bamboo floor, Miike holds on Shimada’s face, sweat and possibly tears welling up in the samurai’s eyes as he awakens to the magnitude of his task. The depth of his anger can be felt in the following sequence, when in one astoundingly frank moment he states to his men, “You’ve entrusted me with your lives, and I’ll spend them at my disposal.” From here, characters and momentum gather simultaneously, personalities and abilities become intrinsically linked, and the group sets off to complete their impossible mission. Ultimately, the only thing more detrimental to freedom than Naritsugu’s influence is inaction, and 13 Assassins reads like an action manifesto against moral weakness.

Miike’s masterful examination of violent sacrifice takes this setup and never stops slicing its way through the necks and limbs of those threatening the national good. The film is a relentless locomotive, fine tuning the movement and trajectory of both heroes and villains as they approach the film’s climactic tipping point. Miike withholds the standard information of preparation so the nearly hour long battle sequence between Shimada’s men and Naritsugu’s horde unfolds completely by surprise, and nearly in real time. Set entirely in an abandoned town rigged to the hilt with traps, ambush points, and corridors of death, the epic action sequence ranks with the best in cinema history, creating a shifting landscape of wreathing agony, glimmering metal, and howling screams that never ceases. Miike pays close attention to the patterns of combat, the way a sword hums as it pierces the air, the deafening sounds of stampeding animals immersed in fire, and the sloppy texture of dank mud blending with hot blood. But there’s always a hit of spontaneity within the mayhem, and this levity adds dimension to the already impressive scope of battle. Lastly, the physical toll of continuous combat begins to define the character’s determination, blurring the lines between Miike’s themes of sacrifice and the reality of potential failure. This melding of aesthetics and narrative tension defines the film’s closing symphony of bloodshed.

As a director known for crazed visions of psychological and physical hell, Miike restrains himself in keeping with the valued methodologies of his heroes. The meticulously paced tracking shots follow Shimada and his men as if they were dancing instead of killing, reveling in the grace of their motions and highlighting the artistry of living the samurai code. Ideology and action become hypnotic bedfellows in 13 Assassins, and the end result is an enthralling and entertaining landscape of morally clear but difficult decisions that impact the fate of a people. “Devotion knows no age,” Shimada says to his men immediately before they engage the enemy. For Miike, this statement carries both a functional and aesthetic weight, words that contextualize his focus on spiritual honor and the necessity for physical violence when such core beliefs are threatened by political and cultural sadism.