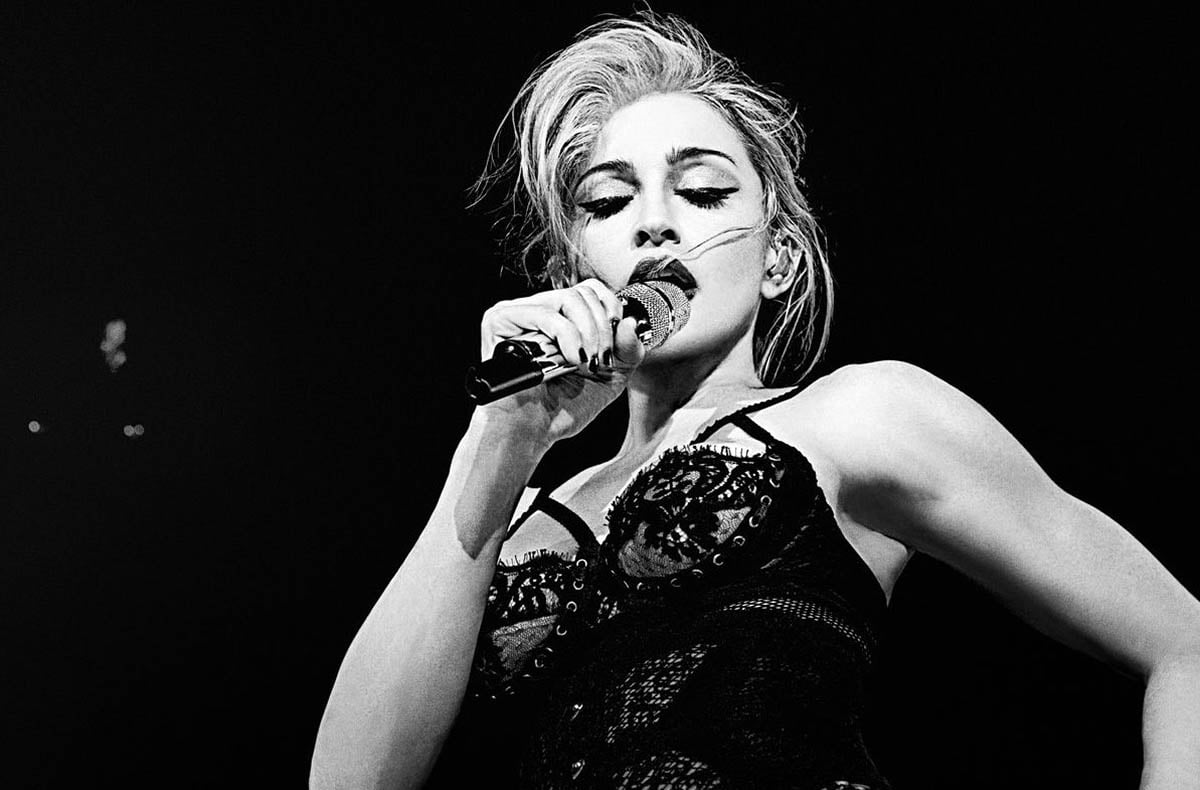 In a ‚Äúmanifesto‚Äù about her latest tour, Madonna insists that the guns and violence that open the show are metaphors. ‚ÄúWhen you watch a film there are usually good guys and bad guys‚Ä¶Sometimes I play both.‚Äù That last admission is an edifying one for an artist whose image has so often been taken at face value by both the media and the public. Duality‚Äîgood and bad, light and dark, masculinity and femininity, freedom and confinement‚Äîhas been a running theme throughout Madonna‚Äôs 30-year career, and for better or worse, her MDNA Tour pushes it to the extreme.

The show opens with some kind of Mephistophelean ritual, with Madonna‚Äîdressed as a lip-synching jihadist turned Russ Meyer heroine‚Äîrevealed inside a giant confessional. The violence, she‚Äôll tell you, is cathartic, an expression of aggression aimed at the church, society, and her ex-husband. The highlight is ‚ÄúGang Bang,‚Äù an ostensible stage imagining of the much-talked-about Tarantino music video that will probably never happen, but the inclusion of an abbreviated version of ‚ÄúPapa Don‚Äôt Preach‚Äù is dubious (a statement about the recent attacks on women‚Äôs rights?) and, as Madonna‚Äôs reinvention of the song both here and during her comparatively underwhelming Sticky & Sweet Tour prove, ‚ÄúHung Up‚Äù (also out of place in this segment) should never be performed in any way other than its original form.

But, as has been the case for about a decade now, you have to take your medicine before getting to the ‚Äúgood stuff‚Äù at a Madonna concert, and after the dark, macabre first segment, the audience is instructed to express themselves, give her all their luvin‚Äô, turn up the radio, and open their hearts. A mashup of ‚ÄúExpress Yourself‚Äù and Lady Gaga‚Äôs ‚ÄúBorn This Way‚Äù is ambiguous enough to play as homage, but the animation projected on the giant video screens that loom over the stage takes deliberate shots at Gaga, with ‚Äúlittle monsters‚Äù gobbling up canned goods emblazoned with images of Madge‚Äôs iconic cone bra and pony tail as well as David Bowie‚Äôs Aladdin Sane lightning bolt. As Bill Clinton said during his speech at the Democratic National Convention on Wednesday, it takes brass to attack someone for something you‚Äôve done, but Madonna, famous for appropriating other artists‚Äô work, has always been the brassiest of them all.

While the apogee of 2006‚Äôs Confessions Tour was the final disco segment, this show‚Äôs creative climax comes prematurely, during the ‚ÄúMasculine/Feminine‚Äù segment. Rather than paying homage to Godard, though, it‚Äôs a tribute to Madonna‚Äôs own sexual personae, from ‚ÄúLike a Virgin,‚Äù reinvented yet again, this time as a piano waltz, to the non-apologia ‚ÄúHuman Nature,‚Äù which is simply but cleverly staged as a hall of mirrors, to ‚ÄúCandy Shop,‚Äù which finally gets a desperately needed makeover. ‚ÄúLike a Virgin‚Äù turns Madonna‚Äôs infamous sexual agency on its head, a male dancer tenderly wrapping a corset around her waist as she weeps before tightening the strings until she can barely sing. Through it all, Madonna gives one of her best, most vulnerable vocal performances to date.

Over-the-top spectacle largely triumphs, though, so moments like that, as well as ‚ÄúOpen Your Heart,‚Äù performed acoustically along with Basque trio Kalakan‚Äôs ‚ÄúSagarra Jo,‚Äù and a rousing performance of ‚ÄúLike a Prayer,‚Äù which had nearly all of Yankee Stadium clapping and singing by song‚Äôs end, are welcome reminders that, for both Madonna and her fans, it always comes back to the music.