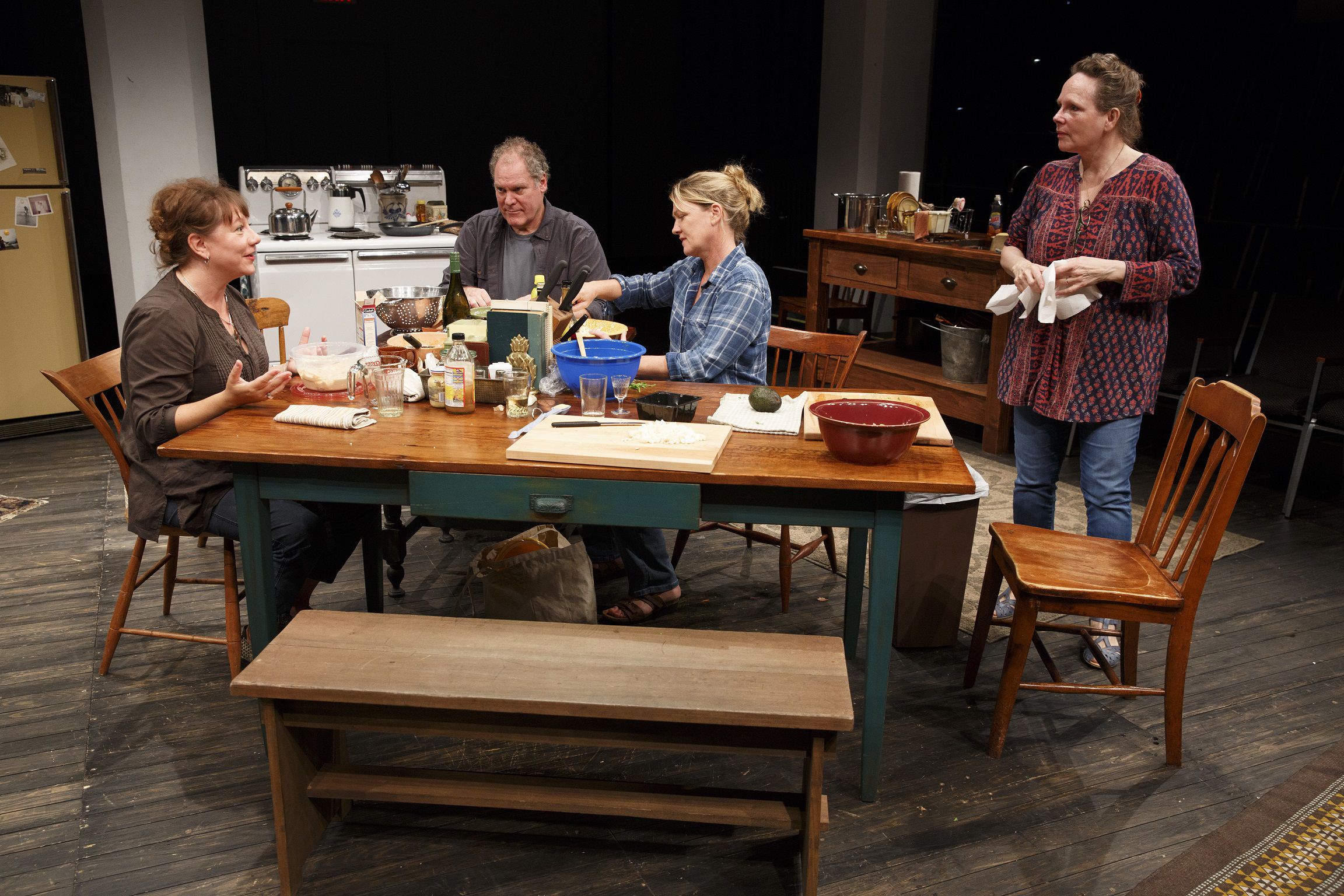 Earlier this year, playwright Richard Nelson launched a unique three-play cycle at the Public Theater which sets out to track, in real time, the lives of an American family during this tumultuous election year. Each play takes place on the day of its opening night: the first, Hungry, which opened in March, introduced us to the Gabriel family of Rhinebeck, New York (the playwright’s own home for the past 34 years); the second, What Did You Expect?, opens tonight at the Public Theater, while the final play in the cycle, Women of a Certain Age, will premiere on election night, November 8.

This isn’t the first time that Nelson has undertaken a project that comprised a set of contemporaneous plays. His last venture at the Public, The Apple Family Plays, was a cycle of four intimate plays that premiered over a period of four years. The Apples, like the Gabriels, also lived in Rhinebeck, and each play was designed to open on the evening of a significant moment or event in American life and politics: That Hopey Changey Thing on the eve of the 2010 midterm elections; Sweet and Sad on the 10th anniversary of the 9/11 attacks; Sorry on election night 2012; and Regular Singing on the 50th anniversary of President John F. Kennedy’s assassination.

When he wrote That Hopey Changey Thing, Nelson says he considered it, and the others that were to follow, “disposable plays” because they were so specific for the time in which they were written. “Slowly it grew on me that these plays actually fit together and they weren’t disposable,” he explains. “Maybe I was learning a lesson that probably many writers learned long earlier, that the more specific you are the more potentially universal you could be. People may forget the references, but the truth of the references and of the moment is something that continues and carries on.”

Indeed, when the four-play cycle was performed in its entirety in repertory last year, in New York as well as in Europe, the emotional impact of the plays appeared to have grown in strength and profundity. Now, with The Gabriels: Election Year in the Life of One Family, Nelson has written a series that spans an eight-month period which culminates on the day of a national event. When we sat down to chat with him, he was in the midst of rehearsing What Did You Expect?, the second play of his current cycle at the Public.

Is What Did You Expect? still in flux?

That’s a yes and a no. I’m continuing to revise the play, and I’ll revise up until three p.m. on opening night, September 16. And the reason it’s three p.m., even though the play’s actually set at 6:30 p.m., is so that press office has enough time to publish scripts for the press. That’s my deadline. We will put in new lines, and whatever else needs to be done up until that time. Hopefully nothing happens between three and 6:30 p.m. that day that I will need to incorporate. That’s my risk.

Is there a specific context for that particular day?

September 16 was taken in the context of just a normal day, not a particular event day. It’s this sense of following along the lives of a family. How the election figures—that depends on what’s going on. I don’t think the election is the only form of conversation when most families get together, especially if there are difficulties within the family that they need to address or deal with. So I think it’s how the election threads through the lives of family, as opposed to being the reason for any discussion.

How’s the Gabriel family different from the Apple family?

The difference is that the Apples didn’t grow up in Rhinebeck. They moved there, so it’s in essence about people finding or needing a home. The Gabriels are born and raised in Rhinebeck. Their parents were born and raised there and their grandparents emigrated there. So this is their place and now their home is threatened by the changes that’re happening in that town. So it’s a very different dynamic.

When you embarked on the current project to write a play cycle set during the election year, did you have any idea that this election was going to be as wild and dramatic as this one?

No, I didn’t. But I think almost any election would be very interesting. This one has given me very interesting challenges, but I think we knew when I started writing the play that Hillary Clinton would be a major force in this election. Whether she would win the nomination or not was unknown, but if she won the nomination she would be the first woman to gain such a nomination. And if she didn’t, then that itself would be something.

Do you have to spend a lot of time being a news junkie to keep up with each new development? And does this distract you from working on the plays themselves?

I read a lot of books along the way. Some proved not to be useful, but just gave me a context to help my thinking, and that’s enjoyable. I’ve always been interested in politics in that way, and I check websites and do all that stuff that everybody does now. But at the moment, it’s been mostly pretty predictable. There’s not very much conversation. It’s just simply opinions stated over and over again. But that’s me talking, and not the Gabriels. I think the difficulty—it’s a pleasurable difficulty and it’s a challenge—is that no one should want to hear my opinions of this election. But they may appreciate hearing the Gabriels—people who they get to know and maybe respect and find interesting, and maybe have some sympathy with—to hear them talk about the election. So that’s my task. I think that you and I, our lives are more consumed with who’s going to win and “Oh my God, how do we stop this awful man?” But people who’re in much more difficult straits might be thinking more about themselves. So this is complicated.

Did you have the whole story in mind, as a single play, when you started?

Yeah, it’s very much like I had a single play in mind. Well, let me put this way: a single story that takes place over a period of eight months. When you say single play it sounds like I’m doing three acts of a play. But I would never think to structure three acts the way these plays are structured. So it’s really three separate standalone plays, but I do think they will gain if they are seen together.

Can the plays stand as they do without being influenced by the elections?

No, of course, things change. How one articulates one’s life—that will change. It’s just like if a hurricane came in, they would talk about the hurricane. If they needed something, or someone had to go on a train or catch a flight in a hurricane, that would be part of the event, but they would still need to go there. So the election doesn’t interrupt their life—just like I can’t imagine that it’s interrupting your life. Certainly it isn’t interrupting mine. It’s how it affects my articulation of my life. What happens in an election may affect the events of our lives because of policy issues and reversals, but at the moment that isn’t happening.

I think the ambition is first to put as complicated and ambiguous or confused people on the stage as I possibly can. And an audience sees them dealing with their lives, and that’s how we learn about them. So how the election comes up, well, it doesn’t have to be much. It can feel like more is being discussed about the election than is actually spoken. We know the people and then we hear how things relate to them. Or, how things don’t relate to them. It’s this entwining of our lives and our culture, and our country that gives a context for the election, that is, I think, interesting.

So the people reflect the country and the times?

I don’t think it’s a representation, as there are no illustrations in the play whatsoever. We’re trying to create a living, breathing world. I’m sure it’s the same if you sat around with your family; our individual problems have a reflection in other people’s lives because they’re going through the same things. Pick almost anything that deals with a family and you can see that most problems have to do with either your children or your parents or financial issues or relationship problems. All of these things, other people experience as well, and in a broader sense, so does this country. So, in a sense the election reflects that, as opposed to the people reflecting the election. It’s what makes it human.

In the quest for what’s human, you don’t shy away from depicting domestic activity, however mundane, on stage. An entire meal was prepared during the first play in the trilogy.

I read or heard somewhere something which was so obvious, but that I had never thought of: that the human being is the only animal that cooks. So, if you’re trying to put complicated and complex humans on stage, why not put them into an activity which is one of the defining elements of being human? I also wanted to make a work play—going back to that David Storey play The Contractor, where these men put up a tent and then take it down, something where we watch people doing and making things. The importance of making things is also very human, I think. And it’s a moral issue in this society where making things is balanced against not making things. I wanted something that I consider the nature of the human being, the moral center of a human being. So what you call mundane I call actually deep.

Interview: Peter Brook on Battlefield and His Return to The Mahabharata