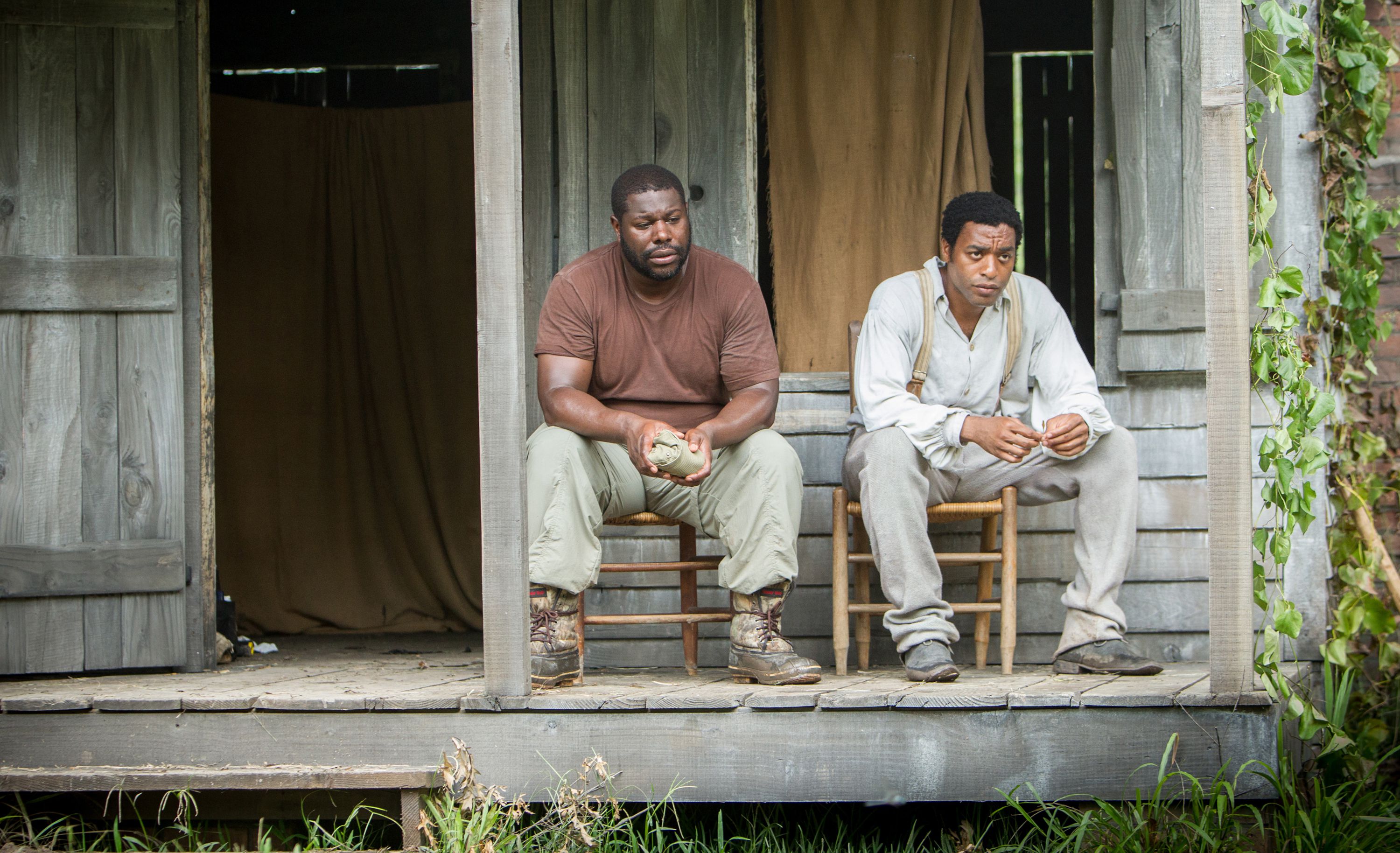 This year’s Toronto International Film Festival welcomed many actors with more than one film to promote. Chiwetel Ejiofor, who, thanks to his commanding performances in Biyi Bandele’s Half of a Yellow Sun and Steve McQueen’s 12 Years a Slave, attracted more attention, among audiences and critics alike, than Benedict Cumberbatch, Jesse Eisenberg, and Colin Firth combined. In Bandele’s adaptation of Nigerian author Chimamanda Ngozi Adichie’s novel, set in Nigeria during the Biafra War, the actor appears as a politically motivated professor who flees his home with his family as tensions intensify between the Hausa and Igbo people. And in McQueen’s hotly anticipated drama, he stars as the real-life Solomon Northup, an African-American freeman who was kidnapped and spent 12 years in slavery. Ejiofor, born in Britain and of Nigerian descent, mostly works in the States, and he brings his profound sense of worldliness to these two parts. I met with him in Toronto to talk about how he transitions between roles, the allure of Los Angeles, and how it feels to be the center of so much Oscar buzz.

Do you remember the moment when you thought to yourself, “It’s decided. I’m going to be an actor”?

I did my first play when I was maybe 15. I didn’t make a decision to become an actor. Actually, I still haven’t officially. I just keep on doing it and then people ended up calling me that. The point was when somebody offered to pay me for it! [laughs] I thought, “Okay, so I can do something that I love and get paid for it. I guess that makes me a professional.” My father was a doctor, but also a musician, so we had that creative element in the family. If I’m connected to the work and experience I find it a very rewarding and enriching way to spend my life.

Was it difficult for a Londoner like yourself to adjust to the Los Angeles lifestyle?

I [still] live both in London and L.A. Because I did Amistad when I was 19, I’ve already been [in Hollywood] for quite a long time. And I have people [around me] that I’ve known for a very long time there. It always seemed to me like Hollywood is a sort of alter-ego of Los Angeles. L.A. in itself is actually this beautiful place where there’s lots of places to hike, surf, swim. I like getting out there. I like swimming, love sailing, so I really enjoy the outdoorsy nature of L.A. I also like the people. Californians have this chilled-out vibe. It’s a very interesting place to be.

What drew you to Half of a Yellow Sun?

I’ve known Biyi Bandele [the film’s director] for many years. We’ve talked about a possibility of going back to Nigeria and making a film for a long time. Then this beautiful book came out, so it was a perfect mixture of events. It was a deeply personal experience. Because not only are my parents Nigerian, but also Igbo [an ethnic group from southeastern Nigeria] and from the exact region then that all the events of the film take place. I feel [African], but also distinctly Igbo. The south is a very specific place in Nigeria. I love being there. So the events [civil war-related] in the film happened to my own family. This part of our history is very defining. The Biafran War was the first one covered by media, and the first images of the starving children later associated with Africa now were taken then. It was the first time people saw Africa in terms of a humanitarian crisis. This war was also the reason why my family left and went first to Paris and then to London. This is the reason why now I speak like this.

You were born in London. Have you been to Nigeria before?

Many times. I used to spend my summers there when I was a kid. As an adult, every couple of years. I recorded interviews with my grandfather, 10-hour long conversations, before he died. I’ve always had a long and fruitful relationship [with Nigeria].

What was the time span in between this film and 12 Years a Slave?

I shot Half of a Yellow Sun immediately before 12 Years a Slave. In fact, I flew from Calabar to Louisiana. I was excited about doing both films. It was an interesting transition: The last place I visited in Calabar was the slave museum. Hundreds of thousands of Igbo, every decade for about 200 years, were taken out of this region and transported to America, a lot of them ending specifically in Louisiana. So in a strange way, even though obviously I flew there, I was following the route of those people…and then telling this other story of slavery. It felt very connected.

You’ve already portrayed a slave in Amistad. How was the experience different this time?

It was completely different. Amistad was a court case. This is talking to and about the specifics of [Solomon Northup’s] life. When I was making 12 Years a Slave, I didn’t reach back to that experience. It didn’t feel connected.

Watching a story like this one, one keeps wondering how humans can be so savage.

We carry on doing that, just in different ways and in different places. We use violence as a way of making money, sadly. That’s what we do and have been doing for a very long time. If that’s the premise of any given society then you’re going to have situations like that. Wars, slavery of some form or another.

How do you feel about the Oscar talk surrounding the film?

I think it’s great when people respond to the film in a positive way. But I’d say I’m always a bit suspicious of words like “buzz” or “hype.” The film, and Northup’s story, deserve sort of a little reflection. I’m worried of all those things being put onto the film before it’s even out, before anybody’s had a chance to sort of breathe with it a little bit. Northup’s autobiography is one of the most devastating, inspiring, beautiful, and haunting things that I’ve ever read or been involved in. I’m glad that people are excited, but they should watch it with their own eyes, without any expectations. Just see his story, the story we’re trying to tell.

12 Years a Slave has been tipped as the Schindler’s List of black experience. How do you feel about such comparisons?

You could look at it as a specific history lesson if you like, because it speaks to that as well. It’s a very detailed, brilliant, firsthand account of what was happening at that time. And it’s Northup’s gift to the modern day, that we can have a day-in-day-out access to what occurred in that period of time. I feel it should be in every school in the world; it’s an extraordinary piece of literature. But also it speaks to human respect. And I feel like this is what people take away from it, a story about human respect, and that’s a great thing for young people or anybody to reflect on.

You said Half of a Yellow Sun and 12 Years a Slave were shot one right after another, but you look very different in them.

I always find that if you put your mind in a different place, you end up sort of physically changing. I probably weighed exactly the same in both of the movies, but the characters’ attitude, worldview, the way they hold themselves was so different, that when watching those two films one might think my weight has changed. But it’s just because I’m carrying myself differently. I always find that the way into a character is physical—that you’re body changes as your outlook changes in terms of the character.

How was working with Sean Bobbit, Steve McQueen’s cinematographer?

Sean is extraordinary in his detail and what he’s able to capture and the beautiful way he works and shoots with the light is purely amazing. And actually the two of them, Steve and Sean are this amazing combination in the first place.

Steve McQueen claims, “There are actors and there are artists.” Which one are you?

I don’t necessarily think of myself in those terms. I suppose I like his idea [laughs]. Obviously, what we’re involved in is an art form, and for me it’s always been a very fascinating one, because it’s about self-expression and using yourself as a conduit to express other things. Your body, your mind, your voice, what you’re giving. I’ve always thought it was very interesting, ever since I started acting.

I don’t know if these two are connected. I think they are separate, maybe. You can be happy in your acting life and miserable at home, or happy in both places, or miserable in both. I am happy in both, luckily.

Review: Thanks for Sharing