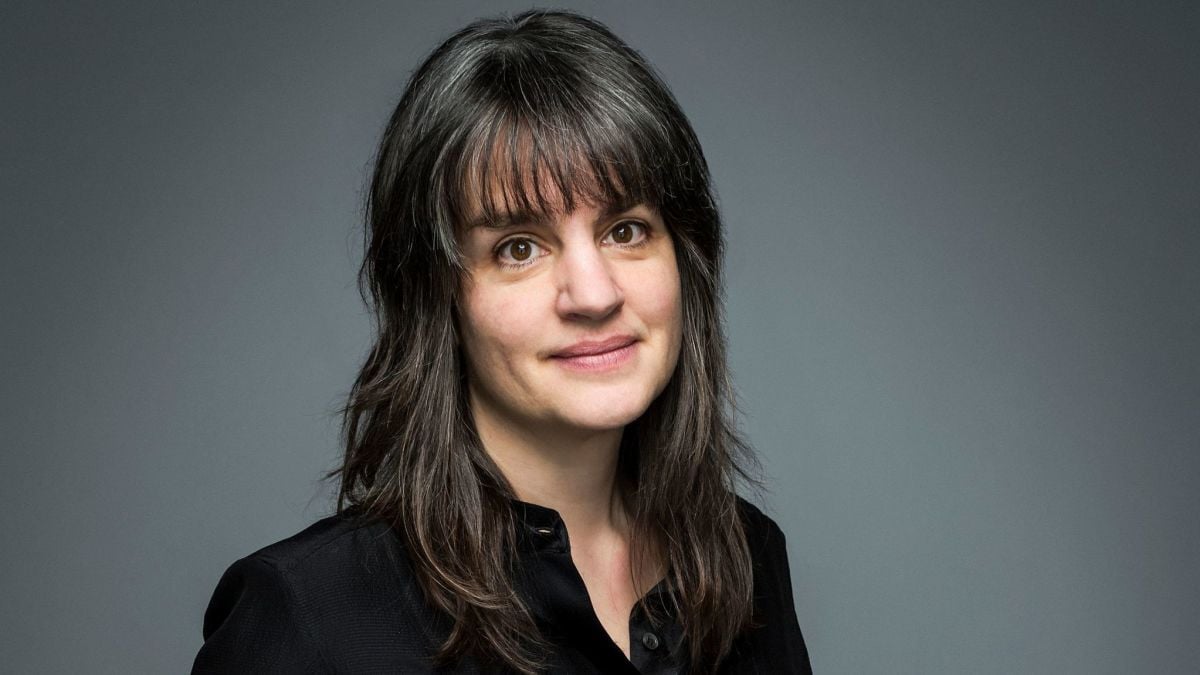 Pam MacKinnon isn’t afraid of Edward Albee. Over the past decade she’s become an expert at staging the work of, arguably, our greatest living dramatist, who’s also known to be exacting about how his plays are handled. Two seasons ago she directed the 50th- anniversary Broadway revival of Albee’s classic Who’s Afraid of Virginia Woolf?, which deftly revealed the unexpected love story at the core of the lacerating relationship between the bickering protagonists, George and Martha. MacKinnon is currently directing the new Broadway revival of Albee’s 1966 Pulitzer Prize-winning A Delicate Balance, which stars Glenn Close, John Lithgow, Lindsay Duncan, Bob Balaban, Claire Higgins, and Martha Plimpton. Close and Lithgow play a well-heeled couple whose comfortable life in the suburbs is startlingly disrupted by the arrival of their best friends, who seem distraught, gripped by an intangible terror. I recently sat down with the director at Broadway’s Golden Theatre, where A Delicate Balance opens next week, to talk with her about the play and her distinctive relationship with the playwright and his work.

You first started working on Albee plays in 2001 with a production of The Play About the Baby in Philadelphia. Were you at all intimidated by the playwright?

We happened to rehearse my production of The Play About the Baby in New York at the same time that the original production of The Goat was in rehearsal, and also a revival of All Over for New Jersey’s McCarter Theater, which later transferred off-Broadway. So Edward hopped from rehearsal hall to rehearsal hall. He just came by about once a week—and that’s a great way for a director to get to know a writer. It wasn’t like we were just chatting at a coffee shop. Baby was still very much a new play for him; he’d only seen two other productions, so he was still interested in it and was engaged with it. Sure, in any given moment I can be intimidated by the wonderful, smart Edward Albee, but you form a relationship—a friendship—and you get to know each other through the work and over time. I didn’t know then, obviously, how important he would be in my life and in my career. It has just been a golden opportunity and, of course, also a responsibility to know how to do his plays.

He entrusted you with a brand new play of his soon after that. What do you think he liked about your work?

I think he understood that I was very interested in mining his intent and working with actors in order to tell the story on the page. After The Play About the Baby, I did a production of The Goat at the Alley Theater in Houston. It had had a very successful Broadway run the previous season, so again, a very new play of his. I sort of reaped the reward of directing back-to-back plays that he hadn’t seen much of and I think he was very jazzed about that. So then, just a few years into our relationship, he FedExed me this brand new play, Peter and Jerry [a prequel to Albee’s first success, The Zoo Story].

How did this current production of A Delicate Balance come about?

Scott Rudin [producer] wanted to work with Glenn Close and the two of them picked this play; that was the beginning of this production. And then Scott spoke with me and I became involved, and we cast the rest of it and assembled this great design team.

Did you get to discuss the play with Albee?

When I did it at Arena Stage, in early 2008, he was there during the first couple of days of rehearsal, and it was fantastic to have him there. He’s a font of information, but it’s also just great to have him in the room with actors because his personal syntax is also on the page. So when you get to hear him speak, it’s not even so much what he says, it’s how he says it. All of a sudden [you realize] that these people speak this way because that’s how he really speaks. There’s nothing artificial or mannered going on. It’s a real treat to introduce actors to him. And then he was also there at the end of third week and saw a run-through and he gave me some pointers. He hasn’t been involved with this production. I’d love it if he’d been able to, but it just didn’t work out. He was just involved a little bit in casting early on.

What’s it like directing the play a second time around?

It’s wonderful to come back to it—to do it six-plus years later. This is a great play and you come at it with different needs at different moments in your life—especially a play like this that’s about time and the accumulation of life experience and expectation. To do it at age 46 is different than doing it at age 40. I’m sure if I do it at age 65 it will feel very different. And we have a wonderful company of actors to unlock that stuff with.

Given your experience with directing Albee plays, what advice do you give the actors?

It’s really about digging into the text. I don’t try to impose any structures other than “let’s investigate what’s here.” And with Edward the punctuation is really important. I call them these psychological stage directions, which can at times drive actors crazy, because they seem so dictatorial. But you have to get under them, you know, and they can illuminate things. And if you really feel strongly, like, “No, no, no, no,” well, then at least you’re in conversation with them. So I’m there to navigate and respond as people go step by step by step by step. But it really is digging into the language, and it’s a lot. I mean, especially in this play, Glenn and John have huge amounts of text, and if you don’t activate it…I guess that’s my big thing: I want it to be about relationships—between two people or among a group. What’s your action? Your language? What do want from the person you’re saying this to?

Can you say more about his use of language?

There’s a real music, and it’s a music that has to be filled. In a lot of Albee, obviously, the subtext is actually the story and people use language not necessarily to say what they mean, but to get through a situation, and then every once in a while it drops in to “Oh, that’s a truth moment!” So if you have an ellipses before a phrase, is that hesitation to get to that phrase a psychological “I don’t want to say this”? Or is the character inventing it in order to get it really specific? Oh, yeah, a semicolon versus a dash, versus three dots, versus an exclamation point. I mean, they’re all really interesting, and important. But I remember in Virginia Wolf…there are some passages that are all capital letters for quite some time. For a while, in Chicago, we were tackling that as, well, this is volume: George is using volume in order to attack Nick. Then Edward came in and said that it doesn’t need to be volume, it just has to be something intense. So he gave us nice permission. The interesting thing about doing these plays of his 50 years after he has written them is that he doesn’t look at the script anymore, he knows it through and through, so sometimes his response to what he’s hearing is looser than what he wrote, which frees me up as an interpreter of his work. Capital letters can mean many things.

What draws you to plays that place so much importance on language? You also directed Bruce Norris’s Clybourne Park, where language is a key component as well.

I feel that way in life. I enjoy people who come at life interested in argument and interested in putting it together. I actually started in a PhD program for political science and dropped out of that, and then moved into theater. I feel that the first couple of years of studying political science—reading very difficult texts—was a nice education. It was a nice springboard: just learning how to read and trying to make an argument about something. Yeah, you’re right that I’m drawn to smart-people-talking plays, or even inarticulate-trying-to-talk plays.

The characters in A Delicate Balance speak with the witty banter of a drawing-room comedy, but Albee takes them, and us, to the very edge and looks into the abyss…

Absolutely, and that’s why it’s interesting to put his plays in these larger Broadway theaters. He wrote for this neighborhood, both for the audience who attends, as well as just the size of the theater. In a smaller house it’s more a collection of individuals, but in a theater that has 800-plus seats, people start to go on this ride as a group and that’s really exciting; people laugh more freely and the house sort of takes on, I don’t know, you can feel it when we’re really cooking: the room starts to vibrate together. We’re using a show curtain like it’s a very traditional play, but it isn’t, because Edward is so forward-thinking. So when Harry and Edna show up at the end of first act and announce with this stripped-down language that they got scared, it turns the temperature of the play. And it feels very contemporary.

Interview: James Marsh on The Theory of Everything, Stephen Hawking, and More