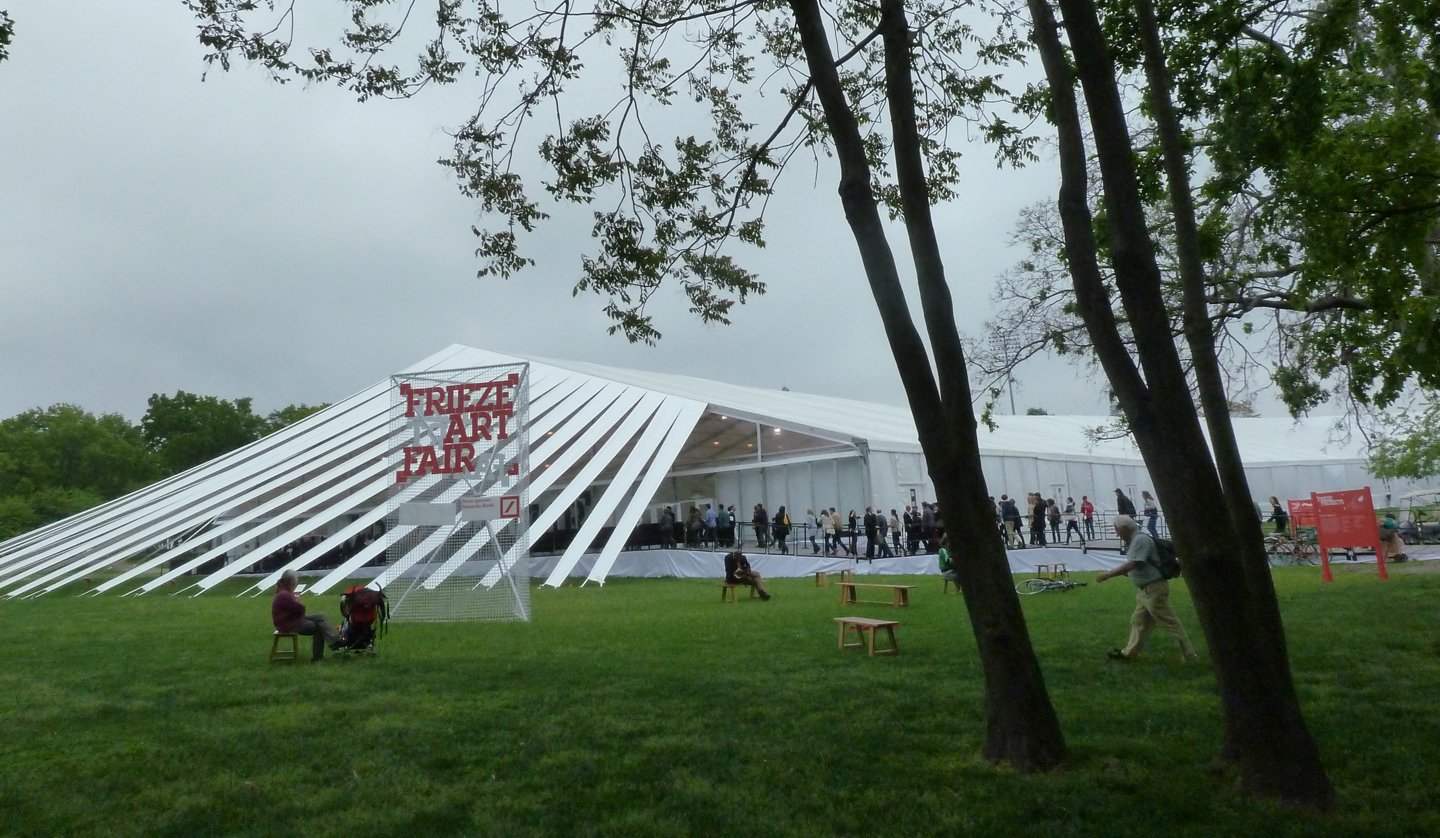 By the time I got back home last night from the final day of Frieze Art New York, the fair staff tweeted: “That’s it, I’m done. Gonna put on my jammies and take a long nap. See you @friezenewyork 2013.” But let’s rewind 2012: I had showed up at the South entrance, but the press attendant was on lunch break, so I walked along the tent north. The wind picked up and the skies looked glum. The outside of a giant white tent, constructed specifically for the exhibition, didn’t inspire visions of grandeur, but the walk allowed me to hear the Susan Philipsz outdoor sound installation We’ll All Go Together. There was Joshua Callaghan’s sculpture Two Dollar Umbrella, a heart-warming sight for any New Yorker who recalls into what bizarre disfigurement a cheap umbrella may be forced by gusts. By Rathin Barman’s intriguing Untitled, a wall of brick and wire with a single sunflower planted on the inside, the friendly guard warned me that I had gotten too close; a tiny red flag in the grass was meant to keep me off. The brisk walk got me thinking about the fair’s calculated spontaneity—the tent arising as if out of nowhere, in a precarious environment. The most visible manifestation of this was a large pit of muddy water fenced off, as if it too were art, by the north entrance.

Once inside, things got a lot more serious. This was the last day of the fair, and the urgency of everyone walking in was palpable. My first full stop was by the seductive works of Garth Weiser, at Casey Kaplan. One of the American artist’s online bios characterized his work as altering “the nature of perception.” As I stood before the three large-scale works with somewhat incongruous titles (My Name is Warren I’m fifteen and desperate to hear from any females into Blancmange, Coronation Street, and Motorheard. My CB handle is Pigpen was one of them), my first perspectival mistake was to believe that the works had been done on wood (in reality, linen and canvas had been used). Yet the surfaces’ undulating ripples made allusions to tree whorls, while their sprawling whiteness, slowly giving up the variegated shadings of blue, red, or of green and yellow, created an illusion of depth. Further on the New York front, Metro Pictures displayed iconic Cindy Sherman—the gory diptych Untitled 89 in which eyes and a tongue emerge from under what look like giblets, yolks, and semi-digested matter, and Untitled 1977, 35 black-and-white photo collages of Sherman figures in alternating costumes and poses—hinting at the wide scope of Sherman’s work.

The other instantly recognizable works included the Tracey Emin drawings and neons both at White Cube and Lehmann Maupin. The Emins weren’t breaking new ground, but London’s White Cube booth was impactful, with the Jeff Wall print Men move an engine back, Damián Ortega’s molten aluminum sculptures inside three glass tanks partially filled with water (Melting Point), and a Damian Hirst piece titled I Want You Too. After all the fuss over the dot paintings, it was refreshing to go back to Hirst’s morbid adventures with the very dead, very-still life: a glass cabinet of preserved fishes, each immortalized in its own glass tank, their magnetic, transfixing transparency as if a commentary on art itself, reminding us that what is captured and frozen, as essence, is already dead. Quieter, but no less impactful, was the work of Mona Hatoum, a London-based artist of Palestinian origin, whose work Afghan was both a physical object—an Afghan rug—and a political statement. In the rug that recalled the ones from her family home in Beirut, Lebanon, Hatoum rubbed out a more realistic map of the continents, restoring larger proportions to Africa, Asia, and South America, and showing diminished Europe and Northern America. Quiet power emanated from the work of this stateless artist, whose use of a modest domestic object further alluded to femininity and gender differences.

My personal discovery this year was the Pakistani artist Bani Abidi. Her Death at a 30-degree angle at Experimenter, archival prints on paper of various sizes, created a rich, at times humorous deconstruction of political monuments. Abidi’s conversation with an unnamed sculptor, quoted in the wall text, revolved around an unrealized 309-foot statue of Gandhi. What followed was a play between person and myth, between politics and art. In some of the photos we see Gandhi, his bronze bust, the sculptor and the politicians, thus displaying the full spectrum of persons involved in public-art decision-making, drawing our attention to the tensions between the sculptor’s personal if somewhat sentimental vision of a humble Gandhi (leading poor children by the hand in a trial cast) and the desires of government officials for a more imposing monument (reproduced in a promotional photo). The photographs served as both documents and artifacts, and as news, tourist promotion and government propaganda, some deconstructing and others perpetuating the myth. Into this narrative, Abidi inserted her commentary on the heavily codified language of monumental sculpture (raised arms, hands pointing to the sky). Playing with scale, she placed some images above eye level, making the visitor look up as if at a monument, while propping others on the floor, making the visitor peer down at Gandhi’s bare skull—an image of vulnerability rather than strength, illustrating the complexity of readings and representations of Gandhi as a spiritual leader on one hand, and a political figure on the other, whose image has been appropriated by the state and the media.

Further peregrination through the tent maze led me to the interactive Watchword of Brazilian artist Rivane Neueunschwander at Galeria Fortes Vilaça, where I pinned up a word to the artist’s board partially filled by previous visitors; to Wolfgang Tillmans’s stunningly formal inkjet print Nachtstilleben at Galerie Chantal Crousel, and to the thought-provoking Thomas Hirschhorn, whose work The Map of Headlessness, made of the artist’s favored humble materials (cardboard, tape, paper), was placed outside one of the food courts. The Hirschhorn word-and-photomontage incorporated a wide and disparate range of images: from a black-and-white snapshot of painter Francis Bacon in his studio, or press clippings of hooded war-on-terror prisoners in orange jumpsuits, to a design-mag glossy spread of Mondrian-pattern decorative pillows. From top to bottom, one could trace the mental map, from headings like “Assertion of Truth” and “The Friendship Between Art & Philosophy,” through “Ontological Abyss,” “Opening Toward Contingency,” and “The Void,” showing an uneasy tension between art and life, order and chaos, sublimation and anxiety, merging into a kind of pictorial madness, which in turn poignantly underscores how our most enduring cultural and socio-political nightmares refuse to be contained, or mastered, by any neatly delineated system of ideas.

One of my final stops on what now looked like a somewhat subversive route was Galerie Krinzinger, a veteran of the Armory shows. Here the circle of artists known as the Viennese Actionism group, founded in the 1960s, included Rudolf Schwarzkogler, whose vintage print Aktion telegraphed pain and mutilation; Günter Brus, whose performance art ranged from excrement and masturbation to vomiting, but whose print from the Starrkrampf series was almost lyrical compared to the more heavily scatological contemporary counterparts of Mike Kelley and Paul McCarthy in Heidi, displayed in the same room; and finally Materialaktion Nr. 16 by Otto Mühl, the founder of the ‘70s commune in Vienna espousing radical and revolutionary aspects of everyday life. Add to these the Ukrainian performance artist Oleg Kulik’s The Mad Dog Performance, featuring the artist, naked and on a leash before a crowd of street spectators, and you’ve injected a dose of the shockingly visceral into the fair’s offerings, blunted only by the fact that on display were prints and not the performances themselves.

By 5 p.m., as the fair’s pace slowed down visibly, with dazed gallerists munching on snacks or the lunch leftovers, the rundown and the weary visitors seemed to have taken refuge in the workshop of American artist John Ahearn. As part of the special Frieze project series, Ahearn restaged his famed 1979 South Bronx Hall of Fame exhibition, making plaster casts of the visitors’ faces. By the time I joined the spectacle, a volunteer with two straws up his nostrils to allow him to breathe was being warned that the substance (alginate) would feel cool to his face, before his features disappeared under its mass. A heroic act, and one-of-a-kind chance to have one’s face immortalized, for a fee of $3,000.

A little later, it was all over, my regrets perhaps typical for a visitor thrown into a happy cornucopia of art: not having had more time, having seen too little, but just enough for a whopping headache and the distinct sense of vertigo that comes from visual overstimulation. The fair had officially closed, the last few catalogues had been sold or given away, and the ferry taking the visitors back to 33rd Street was waiting in the docks. It was drizzling again and as the winds picked up I opted for a yellow school bus instead acting as a shuttle, which dropped me off in East Harlem. Here the mostly young art enthusiasts dispersed quickly among the commuter crowd, swallowed up by the evening rush hour.

Farewell, Frieze Art New York. Keep your jammies on, till next year.

Cindy Sherman and Her Many Guises