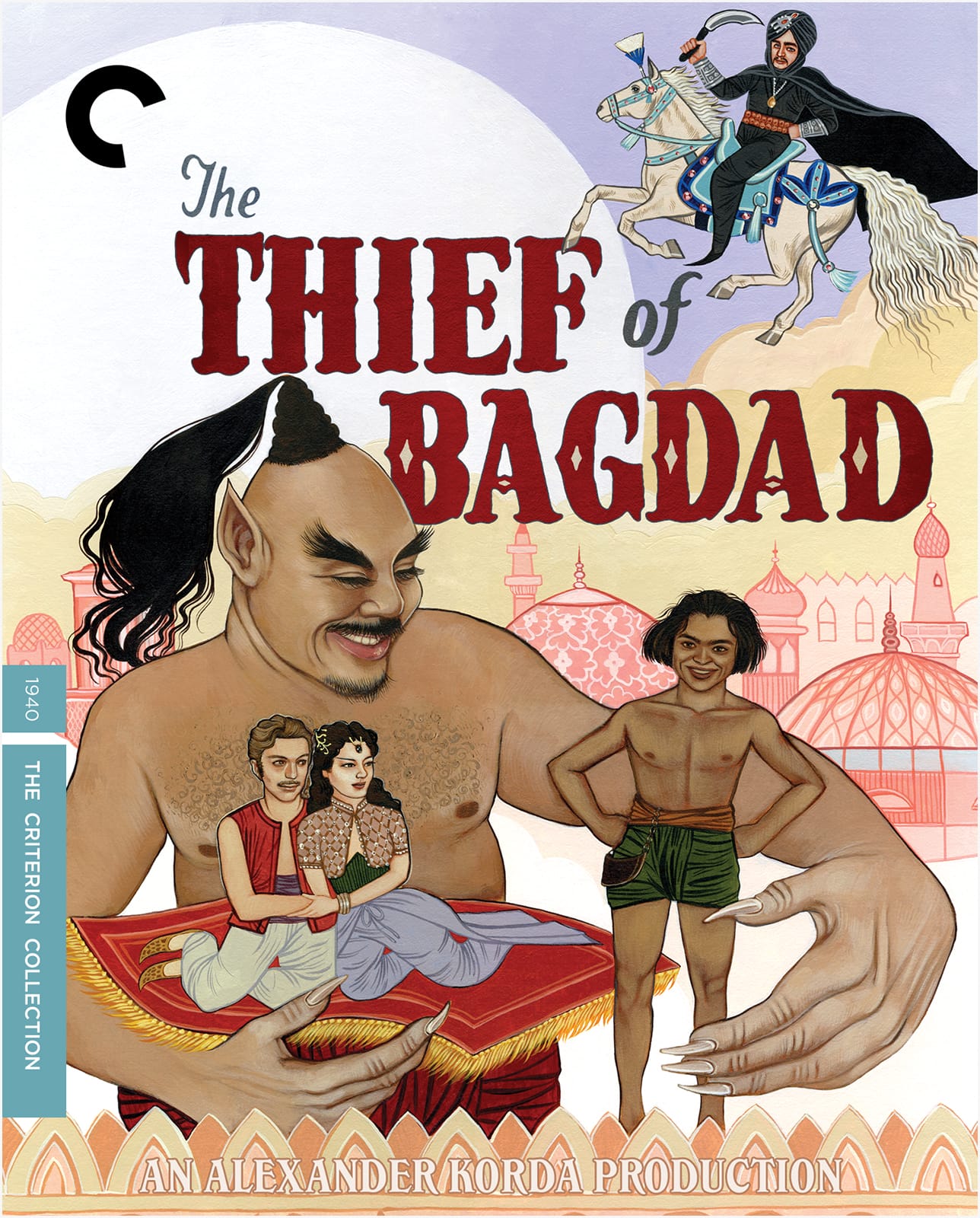 An Arabian Nights fantasy whose auteur was the self-made, Hungarian-born producer Alexander Korda, The Thief of Bagdad lost its race to finish shooting before England declared war on Germany (it was completed in America), but won a place as the British Wizard of Oz and Star Wars of its era, and took Oscars for its eye-popping Technicolor cinematography, art direction and special effects. Korda and collaborators, including his brothers Vincent (production designer, abetted by the legendary William Cameron Menzies) and Zoltan (like Alex, an uncredited co-director), a pair of scenarists, and the three official directors, remade a 1924 Hollywood hit for the three-strip color era, splitting the silent version’s Douglas Fairbanks hero into romantic Prince Ahmad (John Justin) and young thief Abu, played by the teenage Indian actor Sabu with a bounce and brio that will still draw kid spectators in (mischievous scamps, to the front). The result is a fable light on condescension—it opens in the chronological middle of the narrative, with the heroes in the guises of blind beggar and dog—but committed enough to the pleasure principle that the audience is served one giddy act of visual sorcery after another.

An innocent ruler endeavoring incognito to know his people, Ahmad is swiftly usurped and imprisoned by his wicked minister-magician Jaffar (Conrad Veidt, making for a more textured and iconic villain than his Casablanca Nazi three years later), but soon flees Bagdad with the adventure-hungry and loyal Abu. As Andrew Moor writes in the Criterion package booklet, the “infantilized” pre-sexual playfulness of Sabu’s character makes him unthreatening despite the athletic prowess he displays with only a green loincloth covering his brown skin; the fine-boned Justin, whose lithe royal longs for and seeks to rescue June Duprez’s kidnapped princess, is a safely recognizable Anglo actor. (Still, for a late-colonialist artifact the film is substantially less squirmy than Gunga Din, and far more sensual.) Sometimes traveling with Ahmad but often striving to aid him from afar, Abu memorably liberates a mercurial but helpful djinni (Rex Ingram, with the most infectious laugh in the annals of gigantic beings) from a tide-washed bottle. A piecemeal-assembled flying horse, a pink elephant in the princess’s caravan, a multi-armed female “toy” dubbed the Silver Maid (the downfall of the Sultan of Basra, a jolly perv played by writer Miles Malleson), Abu’s entanglement in a giant spider’s web, Grand Canyon rock walls that conceal a ghostly court, and a climactic airborne carpet all figure in the top-shelf matinee-style fun.

George Perinal’s much-lauded photography of pastel castles, candy-hued costumes and lush marketplaces looks as good as it can on a nontheatrical screen, particularly given the movie’s pioneering use of hundreds of effects in a color film. With this transfer from a British Film Institute restoration, the quaint flying scenes don’t look any more dated than those of the Christopher Reeve Superman pictures (happily, the noticeable seams in then-state-of-the-art process shots haven’t been “fixed”), and the Technicolor spectrum gets a full optical workout. The mono soundtrack is a showcase for Miklós Rózsa’s versatile and expressive score, particularly via the optional music and effects track (which makes Thief of Bagdad play like a grandly accompanied silent epic).

Both Thief of Bagdad fans from childhood, Martin Scorsese and Francis Ford Coppola share one commentary track, and their separately recorded styles play to their strengths. Scorsese keenly identifies themes (e.g., the primacy of eyes and the act of seeing), recurring editing and framing motifs, and stylistic precursors of Michael Powell’s later work; Coppola, though especially eloquent on the role of music, is more personal and nostalgic, singing along with Sabu’s theme song: “I want to be a bandit, can’t you understaaand it.” Bruce Eder’s scholarly commentary supplies background on all the creative principles and Korda’s Machiavellian games with directors and composers. A half-hour doc on the movie’s breakthrough visual effects (helmed by Lawrence Butler, who invented the blue-screen process for the flying horse scenes) gets accessible but detailed testimony from FX royalty Ray Harryhausen, Dennis Muren and Craig Barron. Composer Rózsa, in 1976 radio clips, speaks to how the project’s fantastic realm gave him the chance to write a score of “foreground music.” Rickety reel-to-reel audio reminiscences of the film’s making by co-director Powell for his autobiography A Life in Movies are flavorful and revealing if you can’t get your hands on the book. Also included is the 76-minute feature The Lion Has Wings, the propaganda film that Korda cranked out (per a promise to prime minister-to-be Churchill) when the British entry into the war suspended production of Thief of Bagdad. A truth-fudging semi-documentary on the RAF’s first wartime raids, with dollops of nationalist melodrama employing Ralph Richardson and Merle Oberon (Mrs. Korda), its cheesy dialogue and exhortatory agenda have expired but it’s a telling curio.

The nine-year-old within you should be uncritically enraptured by Thief of Bagdad, a genre landmark that’s retained its thousand and one delights.

Review: George A. Romero’s Night of the Living Dead on Dimension Extreme DVD