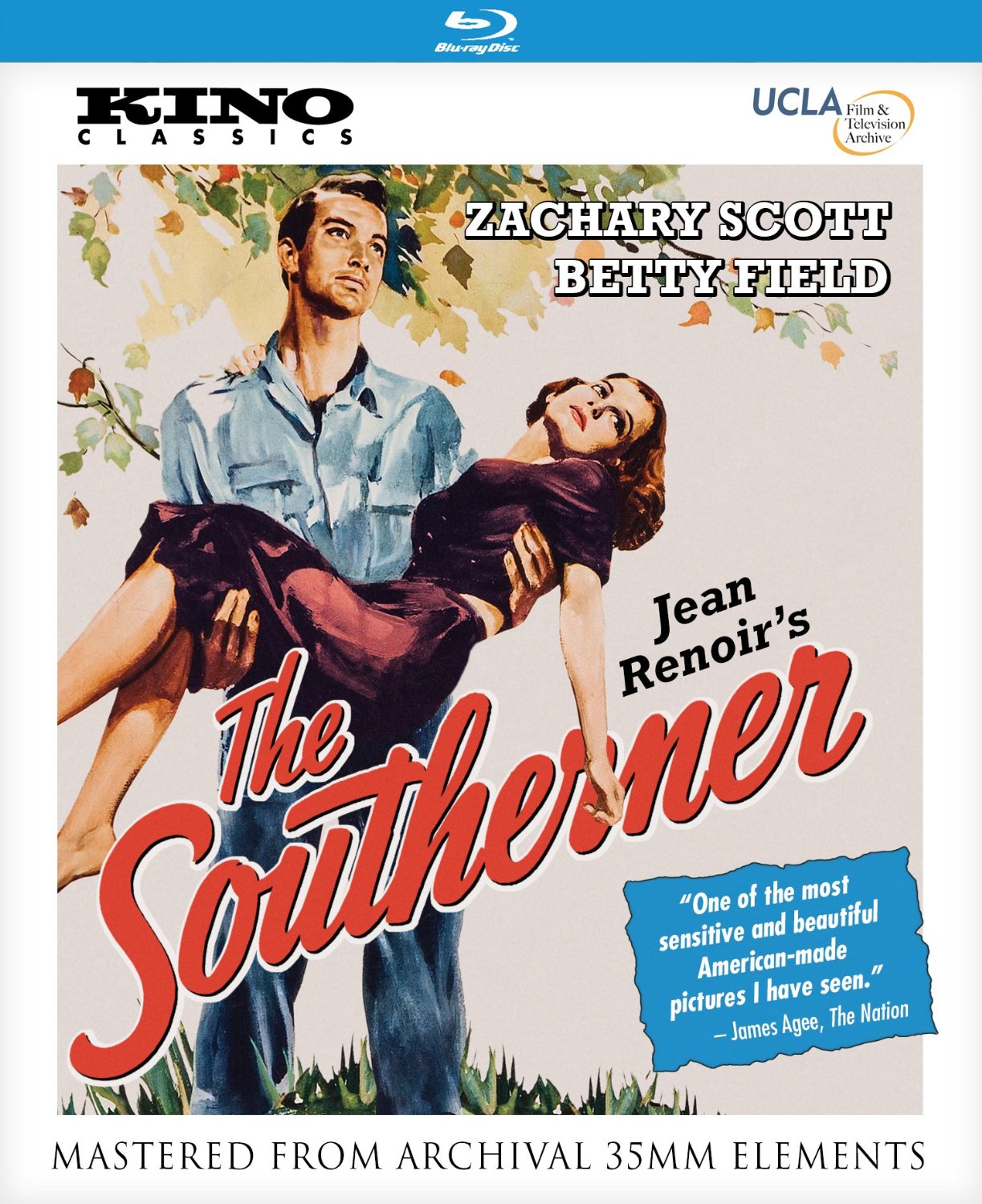 Jean Renoir’s The Southerner displays the studious, socially observant eye of its maker from its first images. Scenes of cotton pickers toiling in a field show African-American and Caucasian workers, and the camera homes in on the unpracticed slowness of the white pickers, and especially how their calm deliberation contrasts with the efficient speed of their black colleagues, who can strip an entire plant of cotton in a matter of seconds. A racial history of agricultural labor is etched without words in these shots, leaving powerfully unsaid the legacy of brutality and dispropriate punishment that accounts for the discrepancy in production.

Renoir’s use of deep focus likewise illuminates much of the social and physical context of the film. When sharecropper Sam Tucker (Zachary Scott) meets in his boss’s office to announce his intentions to strike out with his own family plot, they stand in front of a window that looks out to the company’s name stamped on the water tower that looms over the small town. The boss agrees to front Sam the money, but is quick to point out that he will shred his contract with the farmer the second he fails to make his payments.

Once the Tuckers move out to their new farm, patient long takes soak up the dreary flatness of the terrain, as well as the way the run-down house on the property juts out of the land with all the asymmetrical, flimsy ugliness of a skin tag. The dialogue has the upturned lilt of endless optimism, so bubbly that every statement almost sounds like a question, but the overcast skies and fickle land that hangs in the background of the family’s cheerful disposition say everything of the hard times ahead.

Renoir’s style is evident throughout, but his is not the only voice shaping the story. Renoir shared writing credit with Hugo Butler, who would eventually be blacklisted, and William Faulkner, whose own penchant for portraying the unforgiving nature of rural decay can be felt most strongly in the depiction of the Devers family. A contrast to the perseverance of Sam, the Devers patriarch (J. Carrol Naish) has seen too much of what this land can do to a person, and his relative prosperity is so steeped in loss that its attainment has left him bitter and hostile. When Sam’s young son (Jay Gilpin) comes down with a potentially fatal illness, Devers can scarcely hide his satisfaction, not only for his outward desire for the Tuckers’ land, but his inward search, perhaps, for someone who can empathize with his own traumas of eking a living from this soil.

Renoir and the writers’ styles complement each other throughout, though in the final act one can see certain elements of the director’s tonal control get lost in translation. The director’s French films display a keen balance of seemingly incompatible emotions, but The Southerner cannot quite handle the overlapping absurd comedy, hopeful relief, and cruel caprice that define the final act, perhaps the result of Renoir’s graceful observation clashing with the stiff theatricality of 1940s Hollywood acting.

Nonetheless, the film does tease out revealing moments of character psychology, whether it’s Sam’s wife, Nora (Betty Field), dropping her politeness and baring manic glee when Sam saves the family from winter starvation with a possum, or Devers revealing just how little it takes to soothe a wounded ego with the farcical resolution of his conflict with Sam. Such moments of nuance and multivalence elevate The Southerner above the polemical tradition of John Steinbeck’s Grapes of Wrath, shading the film with the kind of ambivalent judgment that was its maker’s speciality.

Apart from a persistent flicker most visible at the edges, Kino Lorber’s transfer is excellent. High-contrast scenes keep whites and blacks sharp and separated, while grayer scenes maximize detail and texture. Background clarity is the standard by which any transfer of a Jean Renoir film should be judged, and, happily, all of the deep-focus shots retain clarity into the recesses of the frame. The LPCM mono track is similarly solid, quiet in overall volume, but free of any distracting hiss or crackle.

The disc comes with two short films. A Salute to France, co-directed by Renoir, is a war-time propaganda picture designed to foster relations with French soldiers. It’s a charming film, filled with gentle humor in the halting attempts of GIs to greet their comrades in their own language while the French respond in fluent English. Whatever teases might be intended in such exchanges are buried under a genial sense of goodwill. Also included is Pare Lorentz’s 1938 short The River, a travelogue of rural progress that contrasts the bold expansion of America with the potential for environmental ruin. As with the feature it supplements, the film is an intriguing application of Flaherty-esque docu-realism and Steinbeckian commentary, all the more surprising for translating the exoticism of the former to domestic land.

Jean Renoir’s most well-known American feature is a fascinating, if not entirely successful, translation of the filmmaker’s methods and outlook into a Hollywood milieu, and Kino’s superb transfer elegantly preserves its aesthetic virtues.

Birth of an Auteur: Jean Renoir’s Whirlpool of Fate and Nana on Kino Lorber Blu-ray

Review: Jan Troell’s The Emigrants and The New Land on Criterion Blu-ray