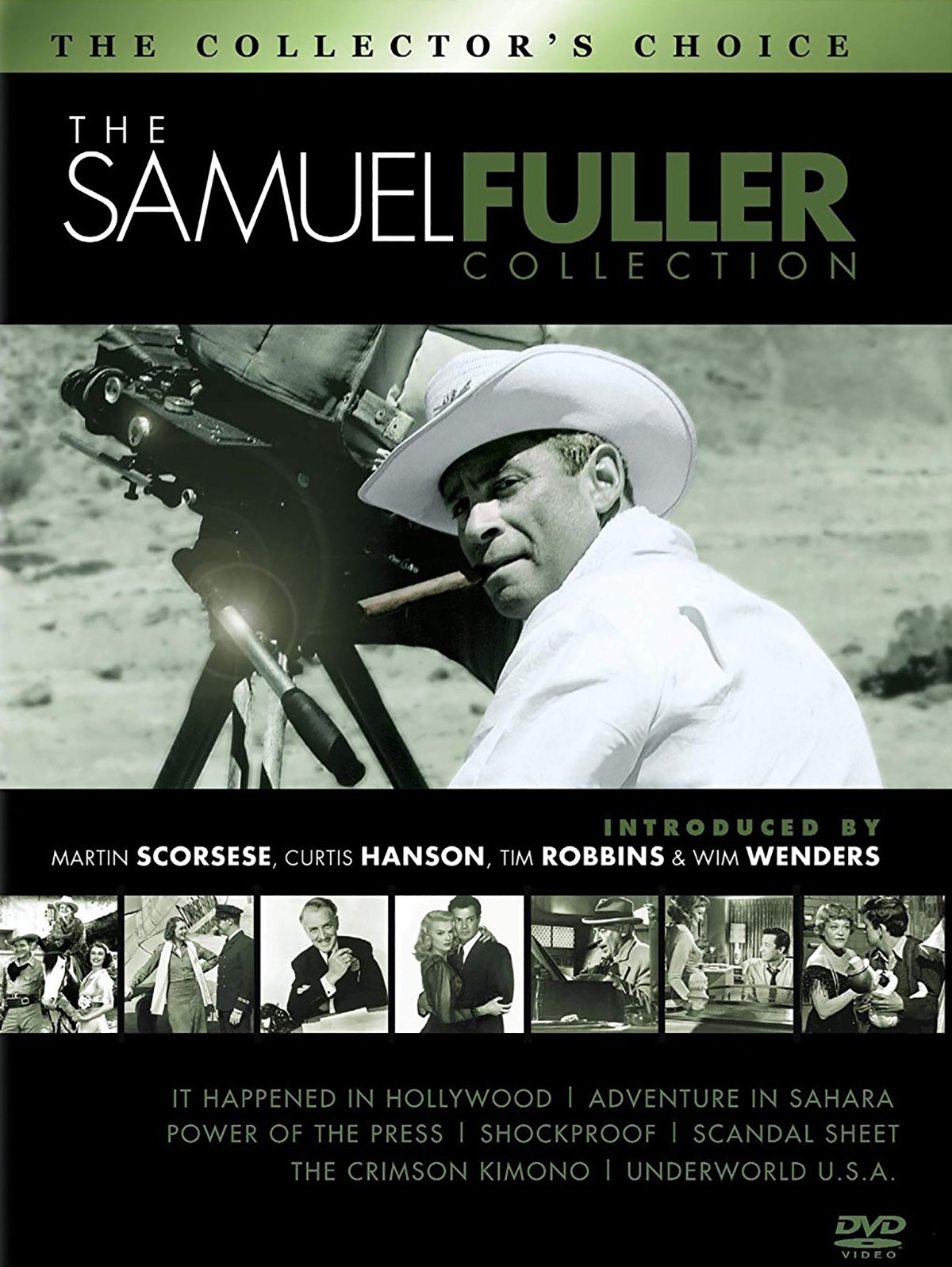 The sublimely unattractive elements of Samuel Fuller’s cinema have never been as dramatically noticeable as on the Film Foundation’s new DVD box set, which rather perversely confuses the terms “auteur” and “writer.” Collecting two of the director’s most accomplished works from the middle of his career—The Crimson Kimono and Underworld U.S.A.—along with five other earlier pictures for which Fuller either penned a script or a source material novel, the curatorial goals of the box are not immediately obvious. It’s clear that Martin Scorsese, who leads the board of the Film Foundation, means to goad us into finding Fuller in whatever long shadow or slapped dame we can throughout this ragtag series, and it’s a highly rewarding exercise to undergo. But the Fuller being championed here is quite different from the one in Criterion’s earlier Eclipse set, which made the filmmaker’s first three directorial projects available: Where Criterion’s efforts preserve Fuller as a masculine cult artist, the Collector’s Choice seems to be advocating him as an unevenly poetic B-flick psychologist. As a result there’s as much on display for detractors to incise as there is for supporters to savor (and, admittedly, the historical narrative told by the release is haphazard and inchoate as best), but as a completist gap-filling, time- and mind-bending trip through the lesser-trod alleyways of Fullerdom, it’s a daringly cavalier bit of DVD management.

Part of what’s so off-putting about the Fuller universe is that it is, without a doubt, a low-budget milieu. Even when essaying a more prestigious production like Pickup on South Street, a 20th Century Fox A-feature also available through Criterion, Fuller’s artfulness is buried beneath adamantine sheets of histrionic stereotype, wholly off-kilter and utterly unplaceable vernacular, and puzzling motive. Curiously, these attributes appear to have been ingrained in Fuller’s style from the beginning; even the blithering backstage sap story It Happened in Hollywood, a late-‘30s script job, is made piquant by a firm, nearly reckless, belief in cowboy motifs, and a tall-in-the-saddle protagonist who puts his chaps on while leaving the set when gangster movies render his western career obsolete. The barely-feature-length Adventure in Sahara similarly introduces Fuller’s pointless flourishes of dark human nature through a fascist bully of an army captain. Trying to determine why these characters say what they say and do what they do—in the service of either narrative framework or socio-moral significance—is likely to produce only frustration. The way to slug a dose of Fuller is through intra- rather than intertextual analysis; to approach his films squarely on their own terms, while keeping an open but static mind (ideally slackened by liquor or emotional fatigue) and an agile eye that can pick out seedy, pulpy rhythms expediently.

Those coarse beats grow louder when the DVD set enters the ‘40s. The story of Power of the Press, following a corrupt newspaper mogul who murders obstacles on his path to the top of the heap, is equal parts propagandist inanity and yellow fiction; the ending, where the crusty old voice of reason addresses a warning about journalism ethics directly to the camera, is an oddly self-defeating moment where we wonder if all the truly dangerous ideals aren’t really disseminated through cinema. But Fuller, a former star reporter, has an uncanny ear for the cadence of press confabulation—as it appears in our grim fantasies, anyhow—and the crazy metronomic small talk keeps the picture afloat even when the plot grows soggy and bromidic. Infectious jargon likewise well serves the film Scandal Sheet (the first ‘50s entry in the box set), a kind of mature rewrite of Power of the Press where rather than killing to control the news, the paper king pin kills to (quite literally) make the news. A gruffly monotone Broderick Crawford plays an editor-in-chief who slaughters his estranged wife and then egotistically assigns his prize reporter to investigate the crime. It’s a tight movie, albeit with gawky direction (by Phil Karlson) that dollies cameras into close-ups to create tension in the most unnecessary places, and Fuller’s fingerprints cover it—especially in the playful manner that the news becomes a noose for the main character.

It’s the remaining three films in the collection, however, that are worth the retail price; with them, the Film Foundation uncovers and genuflects to an often-neglected side of Fuller that demands further appreciation. The obligatory excavated treasure herein is, without a doubt, Shockproof, the Fuller-penned, Douglas Sirk-directed picture that reportedly angered its writer so intensely that he vowed never to type another screenplay unless he could shoot it too (Fuller would eventually go on to maintain uncommonly total control over his films as writer, director, and producer). It’s a highly entertaining film, but we can easily make out what irked Fuller about it. Sirk’s camera is more patient than Fuller’s, and he possesses a much better sense of how individual scenes add up to a story in increments, but he’s occasionally too soft on his characters; we feel his lens soothing them as they blubber away. The doomed lovers of Shockproof, a parole officer led astray by a conflicted murderess with insuperable sexual ties to her former criminal life, require mise-en-scène challenges to match their frenzied, illogical states of mind, and Sirk doesn’t provide them. We pity the two as their relationship progresses from professional niceties to romantic insinuations to on-the-lam hijinks (and Sirk excels at slyly suggesting psychological entrapment, as he would later in the domestically repressed, Technicolor orgasm of All That Heaven Allows), but the buildup lacks a fatalistic energy that Fuller would have injected like steroids into every scene.

It’s precisely that energy that allows Crimson Kimono and Underworld U.S.A. to shimmer with granular, low-rent ferocity as they crescendo and halt the Film Foundation’s Fuller marathon. The technical storytelling techniques employed in these films are some of the most unorthodox in classic American film; we repeatedly cross-cut between very different sets without any establishing shots to cushion the transition, and the camera nimbly trucks, crablike, across rooms to reveal major plot points without fanfare. The effect is disorienting—nearly inebriating—but it also in a way explains, or perhaps prepares us for, the odd, platonic betrayals that Fuller is obsessed with depicting. Just as helicopter footage descends upon the ignorantly light-polluting scab of Los Angeles at the start of Crimson Kimono, so the interracial cop buddies in the film are torn apart from underneath—not only by the usual homoeroticism but by menacing ethnic hegemony they can neither articulate nor mollify—and it manifests in the barbed, platitudinous language of the love triangle they form with a key witness. And every time we zoom into the pitch-black belly of a safe cracked open by the delinquent Tolly (Cliff Robertson) in Underworld U.S.A. we’re enveloped by the dark interpretation of patriarchal loyalty the man must uphold by avenging his father’s death at the hands of powerful mobsters.

In an intriguingly feminine twist, intentions—rather than actions, or Darwinian will—rule Fuller’s world, which might also be why his espirit remains an acquired taste: Intentions aren’t visceral enough to be instantly accessible. It’s not the editor’s violence that dooms him in Scandal Sheet but his hubris, and his aggrandizing desire to become the headline while eluding the unforgiving judgment of the printed page. It’s also the complexity of the Japanese-American policeman’s motives in Crimson Kimono that exonerates his purloining of the Caucasian partner’s crush; intermingled with an artist’s sensitivity is a subtle yet searing demand for Manzanar reparations. And it’s Tolly’s cloud of feigned ignorance over the particulars of his daddy’s death in Underworld U.S.A. that allow his self-destructive intentions to flower so splendiferously—and to keep us violently cycling reactions of repudiation and identification toward the screen.

Fuller’s mastery over these mental undertones achieves noir brilliance the hard way: These films are the cinematic equivalent of a cheap, well-hopped, bitter ale with complex flavors buried as deep as they’ll go. For those without the appropriate palate the experience can be punishing, but for those in the mood there’s simply nothing else that will satisfy.

The Film Foundation is giving a number of other classic film DVD production houses a much-needed run for their money; the digital restorations herein are only a few shelves down from the Criterion Collection’s benchmark quality, and the discs are at cheaper-than-Eclipse prices. There are a few scuffs here and there, and some distracting film grain (which is counter-intuitively most noticeable in the two later-period, Samuel Fuller-directed movies), as well as milky green contrast that wrecks the noir doom of some shadowy scenes. But on the whole these transfers are crisp and sharp, with all the anguished detail of those pained faces as visible as they’ve ever been. The monaural sound is clean and well balanced, and there are even English subtitles included for those who want to ensure that they heard a Fuller idiom correctly. How the dialogue has been translated for the French subs, however, remains a rather provocative question.

As with the earlier Film Foundation Budd Boetticher set, Scorsese and a roundup of Hollywood pals including Tim Robbins and Curtis Hanson, whose L.A. Confidential owes more than a little to The Crimson Kimono, discuss Fuller’s work in a group of included featurettes. None are essential viewing (one attempt at an overarching career study falls particularly flat), but once again Scorsese proves himself as one of cinema’s most aesthetically minded practitioners. His remarks on Underworld U.S.A. are visually incisive, digging into what Fuller is accomplishing in specific shots as well in the general narrative-and Scorsese’s sheer love for these movies is infectious. The lack of liner notes with the set, however, is disappointing, considering the historical significance of the films included.

The Film Foundation offers a Fuller understanding of film noir through one of the genre’s most unique participants.