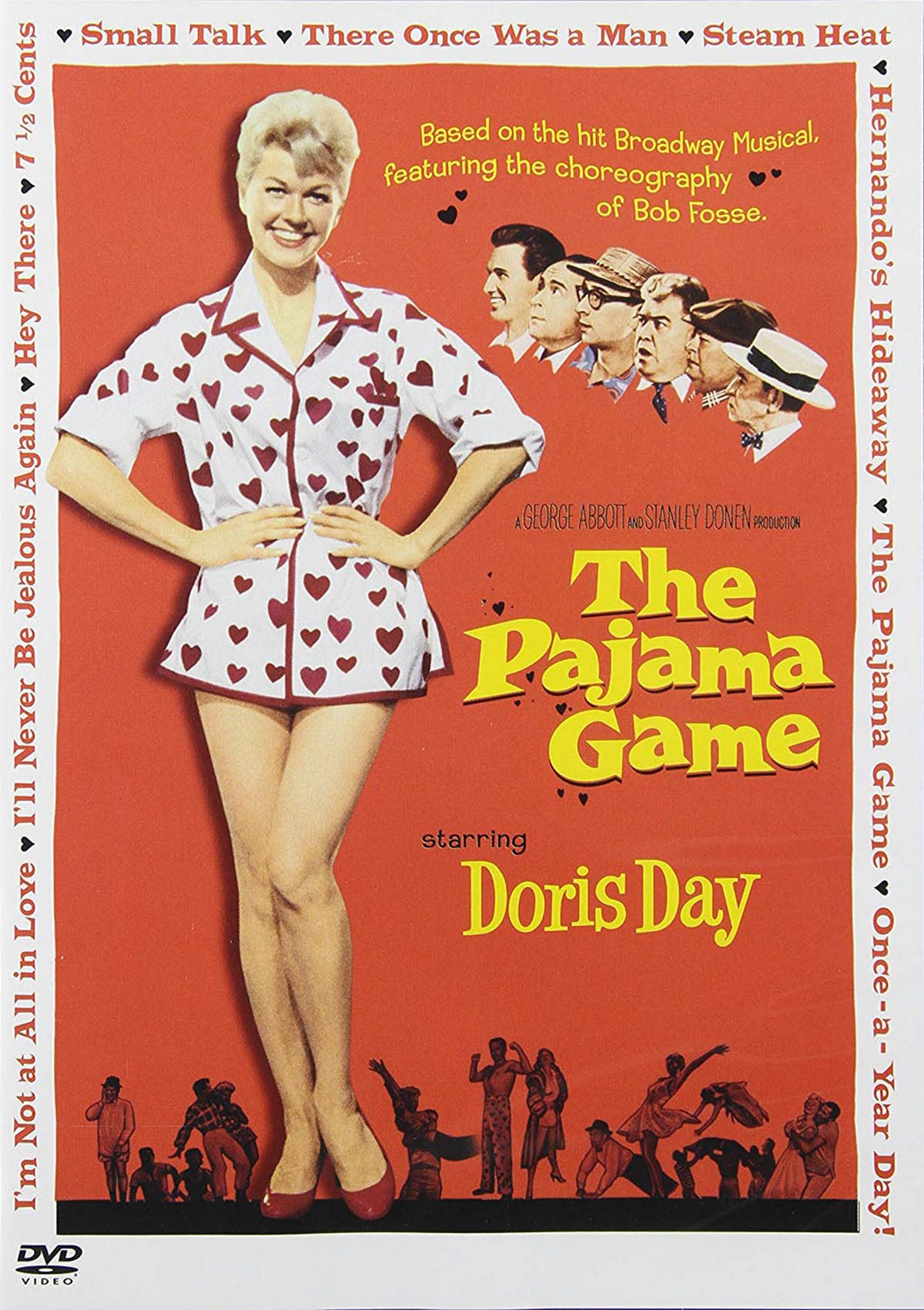 It’s going to prove fairly difficult for those who, like me, are strongly inclined to assign authorship outside of auteur-ship to reckon with The Pajama Game, a spunky, simultaneously neon-dingy musical about a garment factory showdown between the headstrong leader of the workers’ Union (Doris Day, sporting a fetching bull-dyke pompadour) and the hunky factory superintendent (John Raitt, sporting in every conceivable way) attempting to bridge the widening gap between the plant’s workers and boss over a proposed seven-and-a-half cent raise. The author struggle is heady not so much because of the physical roadblock representative in two directors taking the helm—one of which, Stanley Donen, also split the directorial billing for his most critically acclaimed film (Singin’ in the Rain) with a different collaborator, Gene Kelly—but more so because of the centrality of Bob Fosse’s choreography, transposed from the hit Broadway production that won the hoofer his first of a mile-long string of dance Tony awards.

Though only one routine stands tall in Fosse’s pantheon (“Steam Heat”), the narrative momentum of Pajama Game is punctuated far more often than most musicals by musical numbers. (By my count, there had already been no less than six songs just past the first half hour.) And most of those musical numbers seem to serve as introductions to extended, vocal-devoid interludes featuring soft shoe, stomp n’ clap, and those inimitable Fosse proto-vogue, angular-jointed contortions. In fact, as directors, it could be said that Donen and George Abbott’s main contribution to the film’s mise-en-scène was to cart over as much of the Broadway troupe as possible. (Abbott was the stage director.) Visually, the artifice of Pajama Game’s sets is reminiscent of oil-paint backdrops of vaudeville yore, and the insistent swatches of color that cut through the grime complement Fosse’s limber body architecture.

As the two leads’ swiftly flowering romance begins to grow further apart with the pressures of the labor war, the strain is conveyed through the mechanized perfectionism of the choreography, which isn’t, incidentally, confined by the musical numbers. At one point, when the workers object to their maltreatment, they grind their physical routine to a slow-motion display of protest. The centerpiece “Steam Heat,” performed by the quintessentially Fosse-lanky Carol Haney and two Runyon-worthy mugs (the one on the right of the frame seems to be the only one who wears the bowler hat correctly, though), tellingly takes place at a union meeting. The precise, almost masochistic tension-release dynamic of the dancer’s movements (bodies lean back at a perfect 45-degree angle, combinations that involve standing on one’s ankles) mirror Day and Raitt’s dangerous liaison, and their guarded hope that the alliance will tip the scales of the conflict their way. Fosse’s movements hadn’t quite calcified into the nightmare of bondage and strain that would thin out the air in his 1972 film version of Cabaret. Here, as with most musicals of the era, the exertions are rewarded with good health, a condition endorsed by the closing spectacle of Day’s nude gams and Raitt’s bare barrel chest.

I don’t imagine that the film’s main locations-the sweatshop, Day’s rundown railroad track-adjacent house, the smoky basement meeting hall-were filmed with the same pinwheel of color characteristic of Vincente Minnelli’s musicals, and the only scene with any real vibrant pop is the sunny outdoor company picnic. Still, the focus seems a tad soft sometimes, and when the green light into Day’s bedroom suddenly goes red, the balance seems to shift into hyperdrive. I’m also inclined to drop my grade slightly just for even including a pan and scan version, never mind that the widescreen option is still available for those who know what the hell side their bread is buttered. The monaural sound is fine. Carol Haney’s bizarre, prunish vocal chords sound as abrasive and about-to-snap as necessary.

Not much, unfortunately. There is a deleted musical number that doesn’t, to my ears, sound radically different from the reprise that replaced it. There’s also a theatrical trailer and a few pages of text on the show’s theatrical history.

The only thing that doesn’t move in The Pajama Game is Doris Day’s scary butch hairdo.

Review: Mark Cousins’s The Story of Film: An Odyssey on Music Box DVD