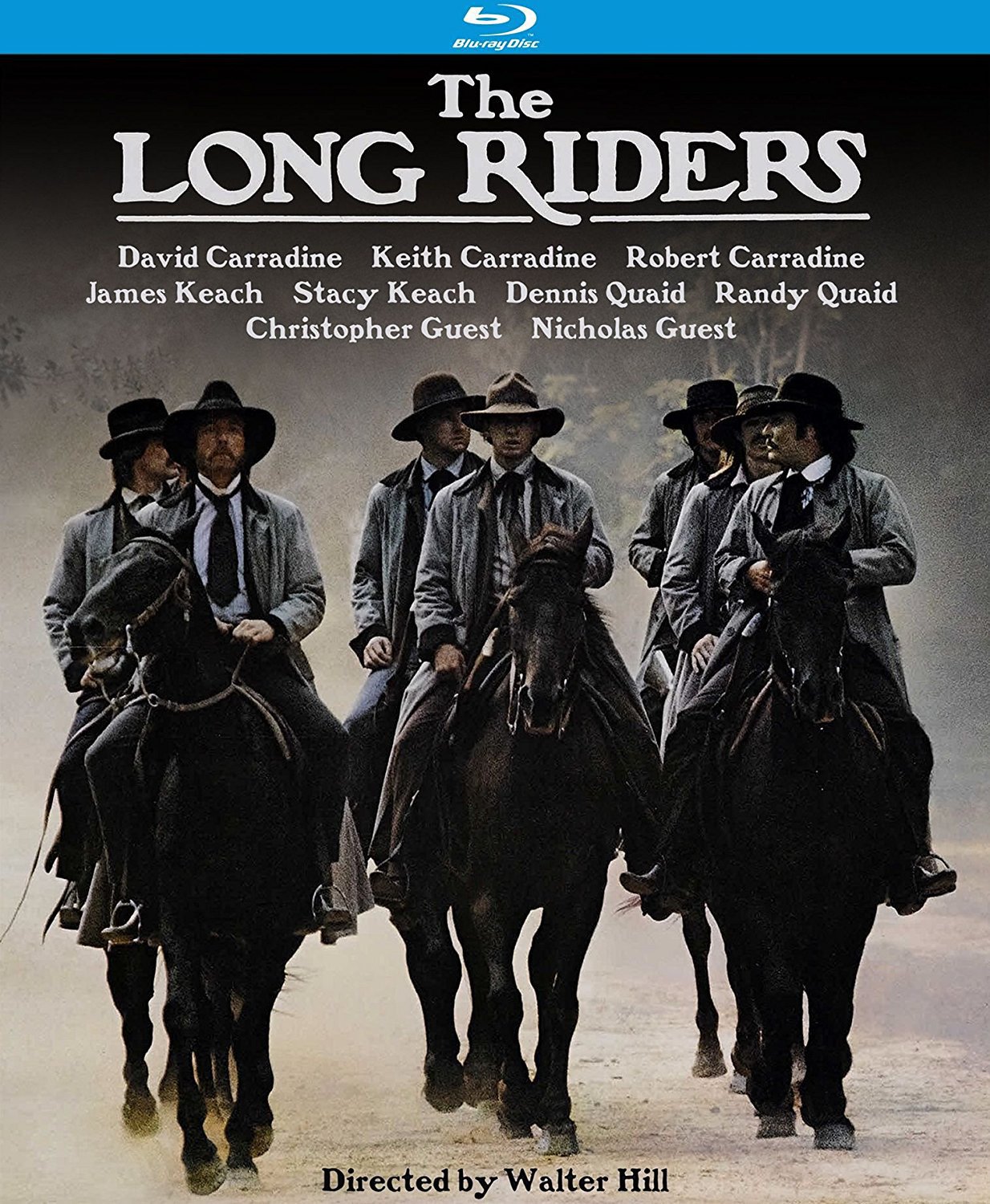 The romanticism of The Long Riders’s opening sequence, in which the members of the James-Younger gang ride horses in slow motion against verdant fields and wooded hills, is undercut by a botched bank heist in a Missouri town. The robbery is a bust from the start owing to the bank’s modest cash supply, but it turns into a travesty when gang member Ed Miller (Dennis Quaid) shoots a teller for angering him, forcing the group to fight their way to safety. Once the outlaws get in the clear, everyone, including Ed’s brother, Clell (Randy Quaid), turns on the trigger-happy kid, ousting him from their circle and revealing a cultish loyalty to Jesse James (James Keach), whose dead eyes and blank face give lie to his supposed charisma.

Yet if Walter Hill’s 1980 film gives us an anti-romantic glimpse of these American outlaws, it does so to ultimately rebuild their mythos around a more realistic core. Here, Jesse isn’t a rock-star-like figure, but the embodiment of a sense of malaise and listlessness that aligns with the country’s woundedness in the wake of the Civil War. His makeshift family of blood relatives and like-minded outlaws are bonded by a nihilism rooted in the South’s defeat, and they seem to take no actual pleasure from their hedonism.

Nearly every man in the James-Younger gang has a sweetheart, yet the women in their lives are largely present out of a perfunctory obligation toward domesticity that no one truly demonstrates. Jesse in particular voices a desire to settle down that convinces no one, least of all himself. And in spite of the group’s ruthless banishment of Ed for his wanton violence, there’s a palpable sense among the men that they get more excitement from the possibility of death in their raids than they do the riches they acquire. Jesse, the least excitable and most passive person in the group, emerges as leader for being the purest representation of this terminal sense of detachment.

In moments between committing crimes, the James-Younger gang’s members fall into lethargic stasis, which makes The Long Riders’s graphic violence all the more disruptive. Clearly influenced by the style of Sam Peckinpah’s The Wild Bunch, Hill shoots much of the film’s action in slow motion, protracting the spraying of blood from wounds and the falling of limp bodies from horses. Yet where Peckinpah used his own approach to violence to bloodily deconstruct the western genre, baring its nasty carnage for all to see, Hill maintains a dreamlike quality when filming destruction, finding the strange beauty in mayhem as a disruption of meaningless tedium.

But Hill’s fealty to the genre’s greats extends beyond contemporary titans like Peckinpah. The Long Riders takes more than a few cues from John Ford, favoring laconic characters whose projected confidence masks an inability to vocalize basic desires. Even supporting players radiate their inner selves in seemingly every image, such as the defiant ethos of Belle Starr (Pamela Reed) or the menace that hangs over Charley and Robert Ford (Christopher and Nicholas Guest) when they’re introduced to Jesse and the gang.

Hill uses a film about one of the most storied outlaws in American history to question and affirm cinema’s own role in reinforcing the nation’s homegrown myths. This metatextual reverence is most clearly seen in an early scene in which the gang holds up a carriage belonging to a rich acquaintance. The men express no remorse for embarrassing the man in front of his fiancée, but they treat an elderly Confederate veteran who’s also in the wagon with utmost respect, with some gang members going so far as to shake the man’s hand. In context, the men pay tribute to someone who fought for the Confederate cause, but the moment gains an added dimension by the fact that the veteran is played by Harry Carey Jr., one of John Ford’s most frequent collaborators. The scene epitomizes what’s perhaps the least revisionist of the New Hollywood westerns, a love letter to a genre that had put American self-image under a microscope before Hill and most of his contemporaries were born.

Sourced from a 4K restoration, Kino Lorber’s Blu-ray retains a consistent layer of fine grain throughout, and amplifies the richness of cinematographer Ric Waite’s palette of browns and yellows. Those naturalistic colors are frequently disrupted by soft blues and verdant greens, which pulse hazily throughout so as to lend the film its dreamlike quality. Flesh tones are warm and realistic, and the spilling of blood that erupts from time to time lends startling brightness to the frame. The disc comes with the original mono track and a 5.1 remix, the latter track mostly a gentle redistribution of ambient effects into side channels. But the surround soundtrack does significantly boost the sound during action scenes, particularly throughout the climactic Northfield duel, during which gunfire erupts for minutes on end.

This disc comes with a host of interviews with numerous members of the cast and crew, including Walter Hill and composer Ry Cooder. The decision to pair James Keach with Stacy Keach and David Carradine with Keith Carradine and Robert Carradine lends these particular interviews a certain chumminess. (Especially of note is Keith Carradine reminiscing about how he tried to get his girlfriend a leading part in the film.) Hill’s interview gives insight into The Long Riders’s considerable historical research, as well as how his practical shooting methods were nonetheless based around thematic purposes, such as the use of evocative greens to counterpoint the James-Younger gang’s blunt cynicism. In a separate interview, Hill also extolls the influence of Sam Peckinpah on his work, offering up anecdotes of their brief professional relationship and delineations of their respective uses of slow motion. A breakdown of the Northfield sequence is included, as is an hour-long making-of documentary featuring in-depth interviews with the cast and crew.