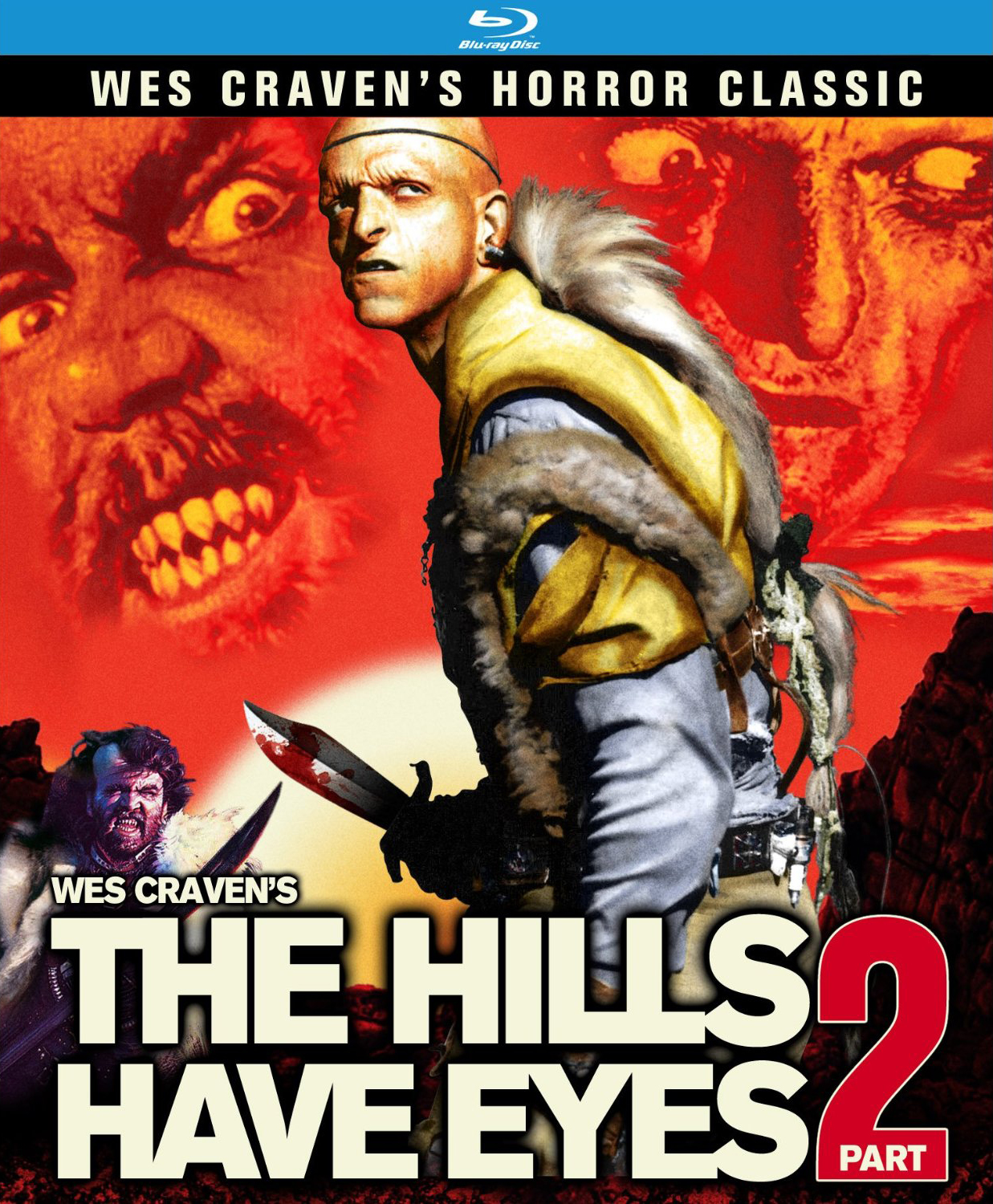 Wes Craven’s The Hills Have Eyes Part 2 is a bland, bloodless shambles. Sequel-making of the laziest sort, it’s nothing more than a perfunctory, undisguised cash-grab. That Craven would thereafter disown the film isn’t difficult to believe. The real shocker is that, less than a year earlier, the same man unleashed A Nightmare on Elm Street, a work that exhibits a wealth of narrative and visual invention in crafting its scarily surrealistic mindscapes. In the meantime, Craven seems to have forgotten everything he ever learned about making fright films. You begin to suspect maybe he set out to strip away every element that made the original film so distinctively disturbing.

The Hills Have Eyes Part 2 shamelessly overstuffs its first act with clips from its predecessor, opening with traumatized survivor Bobby Carter (Robert Houston) flashing back, under the guidance of a sympathetic psychotherapist, to the time he used his dead mother’s body in lieu of mutant bait. Understandably reluctant to return to the desert terrain of the first film, Bobby has few scruples about sending a busload of randy, rowdy teens (who resemble the rejects from Fame casting calls) into the same desert to participate in a dirt-bike tournament. When the kids stop along the way to pick up Beast, the Carter family dog, you’ll probably be scratching your head. Why, exactly, they need to bring a dog along to a motocross competition is anybody’s guess. Official mascot? Totemic animal? Maybe it’s the simple fact that every gang of meddling kids requires their Scooby. Craven doesn’t bother to say. Nor can he leave well enough alone. Out of sheer desperation, wanting one more fat clip to pad out that running time, Craven is reduced to the ridiculous: showing Beast asleep in the back of bus, dreaming about knocking one of the deranged cannibal clan over a cliff.

What follows is a Bataan death march through improbable coincidences, pseudo-awesome dirt-bike footage, stupidly constructed booby traps, and the requisite stalk-and-slash that’s ludicrously light on both counts. Probably the most generous term for Craven’s direction would be “indifferent.” There’s precious little style or atmosphere in evidence. What’s worse, nighttime scenes look like they were lit with a flashlight that was running out of juice. By my reckoning, there’s exactly one halfway interesting shot in the entire film: Cass (Tamara Stafford), the blind girl, stumbles across a false fridge hiding a ladder that descends into another of those seemingly bottomless mineshafts. Her discovery is filmed from below, a gust of wind billowing her hair, one arm extended into the void, and everything doused in eerie crimson light like a frame from one of Lucio Fulci’s infernal nightmares. And that’s about that.

Kino’s 1080p/AVC-encoded transfer looks decent enough, with acceptable grain levels and only minor instances of black crush; artifacts are numerous, but never terribly distracting; in daytime outdoor scenes, colors and textures pop quite nicely. Then again, almost the entire back end of the film takes place at night, so you might want to factor that in. The LPCM stereo track isn’t so hot: Dialogue and effects sound way too loud, yet, at the same time, muffled and/or distorted. A lot of this is attributable to the film’s lowly budget; more than likely, this is how The Hills Have Eyes Part 2 sounded on its initial release.

Barest of barebones: a theatrical trailer, some trailers for Kino’s Jean Rollin Blu-ray series, and a stills gallery are all you get.

Those hills may still have eyes, but only the hardiest fans should have their eyes on The Hills Have Eyes Part 2, an indifferent Blu-ray release from Kino Lorber.

Blu-ray Review: Wes Craven’s The Last House on the Left on Arrow Video