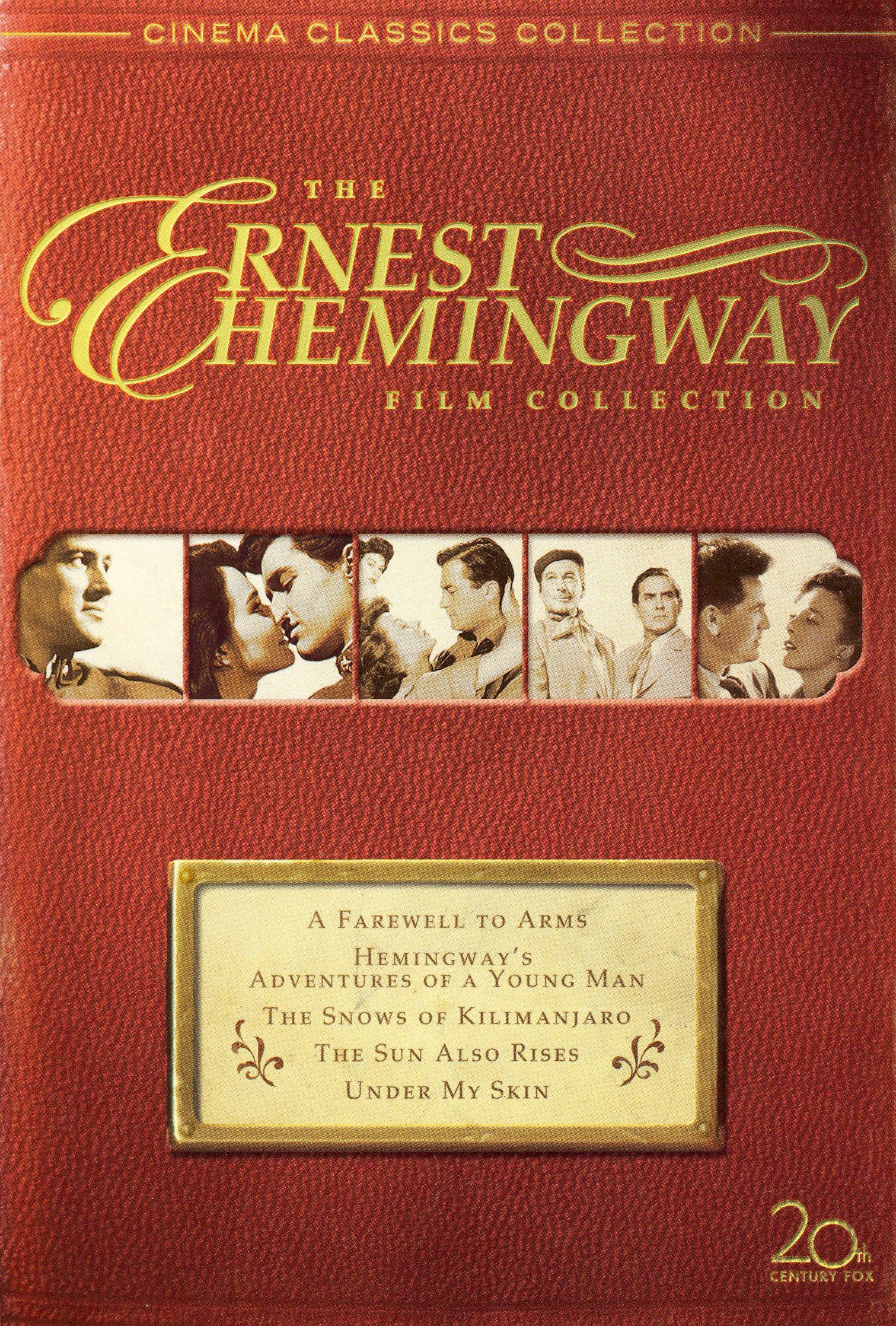 Fox is relying on a few mythologies in its newest box set, The Ernest Hemingway Film Collection. With five films from the 1950s and ‘60s drawn from Hemingway’s novels and short stories, much in the collection depends on the mystique of the author himself—the strength of his persona, the quality of his storytelling, the status of his books within high school classrooms. There is also the myth of the epic: the longer the film, the more precise its recreation of a familiar novel (see the hours of difference in running times between Lord of the Rings’ theatrical releases and their fan-friendly, novel-centric extended editions). And more than anything, Fox is confronting the myth that a Hemingway novel, with the author’s sparse descriptions and dramatic emphasis on the things that are not being said, can make a good film at all.

The studio is playing a dangerous game with this odd mechanism—organizing a box set around a creative writer—and the most endearing movie in the collection is also the odd one out. Jean Negulesco’s Under My Skin, based on Hemingway’s short story My Old Man, is compelling, once you get past the ‘50s polish, extended musical interludes, and Leave it to Beaver-esque familial shine. John Garfield plays Dan Butler, a crooked American jockey traveling around Europe with his young, squeaky-clean son, escaping the Italian gangster on whom Butler welched. The film has that certain contempt for factual detail unique to stars and starlets of ‘50s Hollywood: if the rough-and-tumble Garfield is a jockey, he is the biggest jockey who ever lived. Moreover, the film is brazenly Amero-centric despite its post-war Paris setting. But Under My Skin thrives more than the other Hemingway films in this set because it actively removes itself from Hemingway’s story. By adding those marvelous film noir speeches, Negulesco includes an extravagance of language noticeably removed from Hemingway’s standard prose, as well as an ending good enough for Willy Loman. “He rode it honest,” a friendly jock says of Butler. “No one can take that from him.”

The other four films in the collection—two based on novels, one on a collection of short stories, and another on one of Hemingway’s most famous single stories—are unavoidably linked. All four feature writer characters. All four have nurse-patient relationships. All four revel in their European locations. In short, in a box set devoted to America’s most happily expatriated writer, one seldom short on writerly advice, film is perfectly in tuned to the repetitious themes in Hemingway’s works. Given Hemingway’s breathtaking skill as an author, these common threads are hardly noticeable in his books, or easily forgivable. In two-hour doses, the redundancy in story is tiring, so that Hemingway’s stories cease fascinating, and the collection comes to be about these films’ outdated modes of cinematic spectacle.

A Farewell to Arms is the Lord of the Rings , true-to-the book epic in the group, a grand 1957 adventure starring Rock Hudson as Hemingway’s mirror of an Italian ambulance driver in WWI, who happens to fall in love with an English nurse named Catherine Barkley (Jennifer Jones). The film does follow the plot closely, retaining a few symbols from Hemingway’s manuscript. But, across the Italian front, crossing a lake into Switzerland, the film is wonderful because of its slow, at times achingly patient pacing, a relic of its time meant to exploit the relatively new technologies of widescreen and color, along with Italy’s studios and set builders. The result is an operatic mood matched by the film’s beautiful colors; the cinematography and sets are gorgeous, even if they borrow from Gone with the Wind. The visual niceties of the film are hardly matched by its performances. Supporting actors—a young Elaine Stritch and legendary director turned actor Vittorio de Sica—carry the show. Hudson is Hudson. Jones is awful, playing Barkley not as a woman in desperation but as a teacher scolding a truant student, a condition made worse by her constant use of the word “darling” and “boy.” Also, it’s just never a good sign when a movie has yodeling in it.

The remaining three films offer variations on the same set of triumphs and setbacks, though no more yodeling. They do have the wonderful displays of that rich Cinemascope Technicolor. The marvelous slow pacing. Composers working overtime to create expansive scores. Gregory Peck as Harry Street in The Snows of Kilimanjaro, displaying his uncanny ability to stretch seven syllables out of the word “why.” However, the most recent film in the group, 1962’s rarely seen Hemingway’s Adventures of a Young Man, based on the semi-autobiographical Nick Adams stories, is essentially a longer version of A Farewell to Arms, extending the ambulance driver’s story before and after the war while clarifying the juvenile reasons behind Hemingway’s life and character: a hateful, overbearing mother in Mrs. Adams (Jessica Tandy), a pristine, incorruptible pre-war Americana that bores a scamp like Nick Adams—for that is the only word for him—just as much as it instills in him Hemingway’s trademark sense of adventure. You quickly wonder about the need to package the two films together, until the larger trend of juvenility emerges.

These movies—and Hemingway’s books—are filled with reactionary men: Street throwing a glass across the room and walking out on a party like a petulant child because his girlfriend is teasing/abusing him. The impotent war veteran Jake Barnes (Tyrone Power) in 1957’s The Sun Also Rises refusing to take any side in the fights he orchestrated between his friends or Robert Cohn (Mel Ferrer) getting involved in the fights in the first place. In Hemingway’s writings, this sort of behavior is always the result of man’s interaction with woman; reflecting the base material, the relationships between men in these five films are infinitely more complex and lasting than any of the sentimentalized relationships that grow and are cut off between these contemptuous other halves.

Wait, you say. This is Hemingway we are talking about, and I admit that criticizing a Hemingway-based movie because of its unconvincing women is, on the surface, dumb (Hemingway’s women have a tendency to be unconvincing). But as a writer, he at least knew and clarified the difference between sympathetic weakness and outright insanity: Catherine Barkley, for all her possible faults, was believably in love with Lieutenant Henry. On film, Catherine Barkley is manic, obsessive, erratic, stifling, and intolerable, flying into rages at every odd moment before turning them suddenly into exclamations of love and delight. And it may not be Hemingway’s fault. The Hollywood of the 1950s or the actresses themselves were just as guilty as Hemingway for romanticizing or simplifying women’s roles; for every Norma Desmond, you have a hundred femme fatales worked into their certain stereotype. But whomever is to blame here, these women are impossible, and the films in this collection, whittled down to focus only on Hemingway’s flawed male hero, are less than appealing representations of Hemingway’s writing as a result.

And while they are good examples of the era’s standards of filmmaking, no film in the set is exemplary or truly innovative. The performances—save Stritch, De Sica, and Peck—are forgettable. And at a few points—such as Snows on Kilimanjaro’s hunting sequence, which includes African tribesmen happily serving white colonials while carrying a rhinoceros head around a fire, chanting—the films are so patently offensive in a contemporary context as to make me wonder if we want to remember them. Beside nostalgia, then, a sense of preservation or the people who saw these movies when they came out and rightfully and fittingly want to retain some element of that memory, little reason remains for the Ernest Hemingway Film Collection. It only shows the myriad things that can go wrong in adapting a cherished novel to the screen, especially the works by a writer of such subtlety and controversy—of such mythology—as Ernest Hemingway.

As good as the restoration has been to these films, the image and sound are hardly ideal. Frame jumps, transition issues, cloudy audio, and generally low volume take away from a nostalgic viewing experience.

While the historians offer some interesting insights into the production of these movies, the material on the set is up-and-down. Up: the classic newsreels announcing A Farewell to Arms’ gala opening night. Down: the Hemingway of Film segments, mostly a sycophantic form of English class.

A nice set of examples of what not to do in adapting a legendary writer for the screen.