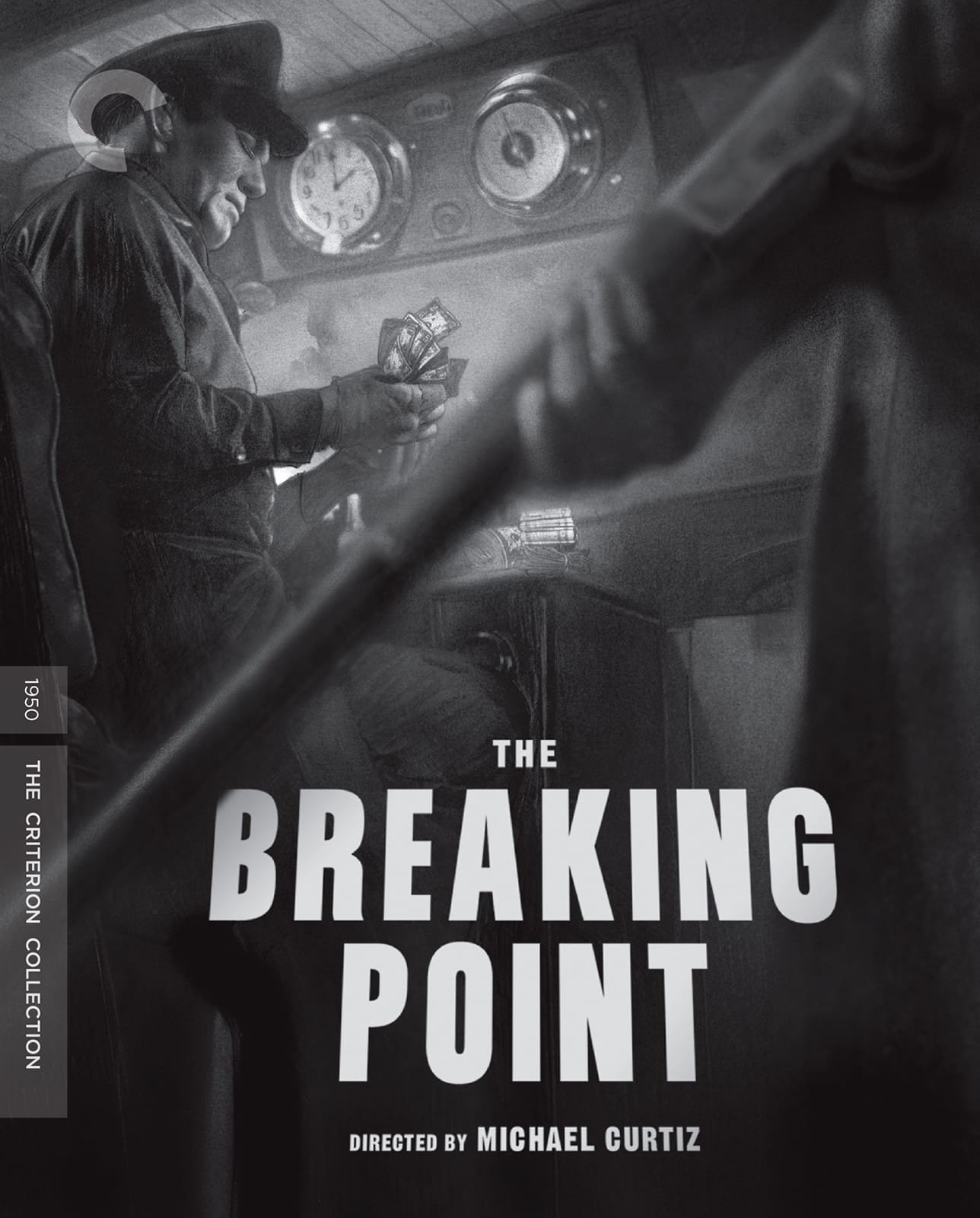 Michael Curtiz’s The Breaking Point has long been overshadowed by To Have and Have Not, Howard Hawks’s treatment of the Ernest Hemingway novel that inspired both films. Hawks deviated wildly from Hemingway’s story and fashioned a glamorous adventure that abounded in Hawksian grace and coolness under pressure. The Breaking Point trades in a different kind of mythology, relating a moody and playful story of regret via Curtiz’s particular brand of vintage Hollywood craftsmanship—a blend of stylized sets, exacting camera movement, and piercing behavioral portraiture that quietly helped to cement the conventions of most genres in American cinema.

Once a captain of a PT boat in World War II, Harry Morgan (John Garfield) is now trying to earn a living commanding a sport-fishing vessel in Newport, California. Curtiz and screenwriter Ranald MacDougall take their time establishing the contours of Harry’s desperation. Like the director’s Mildred Pierce, The Breaking Point is a character study draped loosely in traditional crime-film garb. Harry’s marriage to Lucy (Phyllis Thaxter) suffers under the burden of the family’s financial strain, and Lucy is pushing for Harry to abandon the boat and work in her father’s lettuce fields. But they nevertheless have a sexual chemistry that refutes the clichés of noirs, which often insist on furnishing their put-upon heroes with prudish wives who exist to nurture our complicity with males who behave badly. Harry and Lucy share an earthy kind of eroticism that testifies to the pleasures of living and growing with a lover, and Curtiz frequently drinks the couple in as they try to fool around out of their daughters’ eyesight.

Scenes keep throwing curveballs. Casual noir fans may wonder when the plot is going to precisely surface as Harry jumps into schemes that quickly evaporate. Harry agrees to take a rich schmuck, Hannagan (Ralph Dumke), and his female friend, Leona (Patricia Neal), fishing into Mexico, which is to net Harry a career-saving payday. Instead, Hannagan loses money betting on cockfights and flees the scene, permanently exiting the film, leaving Harry in a will-they-or-won’t-they situation with Leona, who’s drawn to Harry’s Garfield-ian visage as well as his casual way of weathering failure.

A central crime usually lends a noir its purpose, suggesting that the hero’s life is leading to one pivotal moment, inevitably glorifying his senses of destiny and self-pity. The Breaking Point’s stop-and-start structure casually detonates that sort of grandeur, affirming Harry’s escalating sense of futility. Of course, Harry treads the same nowhere road over and over, hoping it will miraculously lead him away from his static life, eventually allowing himself to be drawn into human smuggling. At a certain point, one might wonder why Harry’s so eager to avoid managing a field of lettuce for his beautiful wife’s father, as there are certainly worse fates for a rigid postwar American male.

The Breaking Point is a wry and elegant ode to the disappointment that creeps up on people as they approach middle age and realize that life has a time limit. As a filmmaker, Curtiz is drawn to self-contained vignettes that suggest the boozy, sexy, comic, violent, racial, and sociological ebb and flow of day-to-day existence, which was the primary appeal of his Casablanca. Each moment in Curtiz’s best films represents a new beginning, a new set of possibilities as vivid character actors enter and exit the frame.

Here, there’s a wonderful moment between Harry and Leona, staged with Curtiz’s usual prismatic fluidity, in which Leona stands near the read windows of her beachside room and confesses that she was once torn between someone like Harry, with dirt under his fingernails, and the moneyed men who now keep her afloat on luxury. Leona’s trying to compliment Harry as well as condescend to him, but Neal invests the line with a musical tinge of longing that complicates a character who’s understood to be playing a femme fatale, a role that Leona’s finding increasingly ill-fitting.

Curtiz is often justifiably praised for his hyper-detailed blocking and masterful tracking shots, techniques which are on prodigious and hypnotic display in The Breaking Point, but his willingness to invest in characterization is also distinctive and evocative. In another memorable sequence, Lucy finds Harry and Leona drinking together at Harry’s favorite Newport bar, and, rather than make a scene, she takes a few shots with them and brings her drunk husband home. This sort of ambiguous, compromised, and very adult moment, in which we can’t entirely parse what everyone feels because they’re not sure how they feel themselves, is increasingly rare in a modern American cinema that insists on hammering every emotion into a pat, editorialized mold.

Garfield was an unusually unpretentious masculine icon, with a light, gravelly, one-of-a-kind voice that he often used to inform dialogue with notes of self-preservation, humor, and a frazzled vulnerability that made his characters attractive as well as intensely relatable. He gives one of his best performances in The Breaking Point, investing Harry with a compelling unknowability that explains how he draws devoted eccentrics into his orbit. Of course, it’s retrospectively impossible not to associate this film, which contains Garfield’s penultimate role, with how HUAC destroyed the actor’s life during the Hollywood blacklist. The film’s title now feels all too literal, offering an inadvertently autobiographical snapshot of a troubled professional and wounded soul who’s on the verge of tripping into oblivion.

Per the liner notes, this new digital transfer was created in 2K resolution on a Lasergraphics Director film scanner from a 35mm safety fine-grain positive made from the original camera negative. The result is a positively stunning image: lush, creamy, pristine, with rich shadows and strong, subtly varied whites, which range from intentionally soft to hard and crisp. The level of detail in the compositions, from the textures of the fabrics worn by the characters to the various seaport landscapes, is also extraordinary, emphasizing the film’s mixture of docudramatic and figurative flourishes. The monaural soundtrack greatly bolsters the immersive atmospheric noises, such as the clinking of glasses in a bar or the rustling of children at home, while sharpening the clarity of dialogue delivery. A beautiful restoration that brings the film’s superb artistry to the fore of critical awareness.

A new interview with Alan K. Rode, author of Michael Curtiz: A Life, provides a succinct overview of Curtiz’s career. Rode discusses Curtiz’s start in Hungary and move to Hollywood after being recruited by Warner Bros., as well as his addiction to filmmaking—how he grew increasingly selective about material after refining his process over dozens of productions. Meanwhile, a new interview with actor and acting instructor Julie Garfield offers a short biography of her father, John Garfield, detailing his hobo adventures across America, his affiliation with the Group Theatre, and Red Channels, the document that cited him as someone with communist connections and sympathies. Julie Garfield also discusses her father’s performance in The Breaking Point, suggesting how his Method-informed sense of physicality subtly rounded out the character. A video essay by Taylor Ramos and Tony Zhou analyzes Curtiz’s fluid sense of framing, showing how the filmmaker used multiple planes and entrances and exits to convey a wealth of narrative information with seeming ease and casualness. A portion of a Today episode from 1962, discussing a few of Ernest Hemingway’s artifacts (including pages from a draft of To Have and Have Not), the theatrical trailer, and an essay by film critic Stephanie Zacharek round out a slim but illuminating package.

With their beautiful restorations of Mildred Pierce and, now, The Breaking Point, Criterion is resurrecting Michael Curtiz’s reputation and legacy, illustrating to young cinephiles that there’s more to this underrated director than Casablanca.