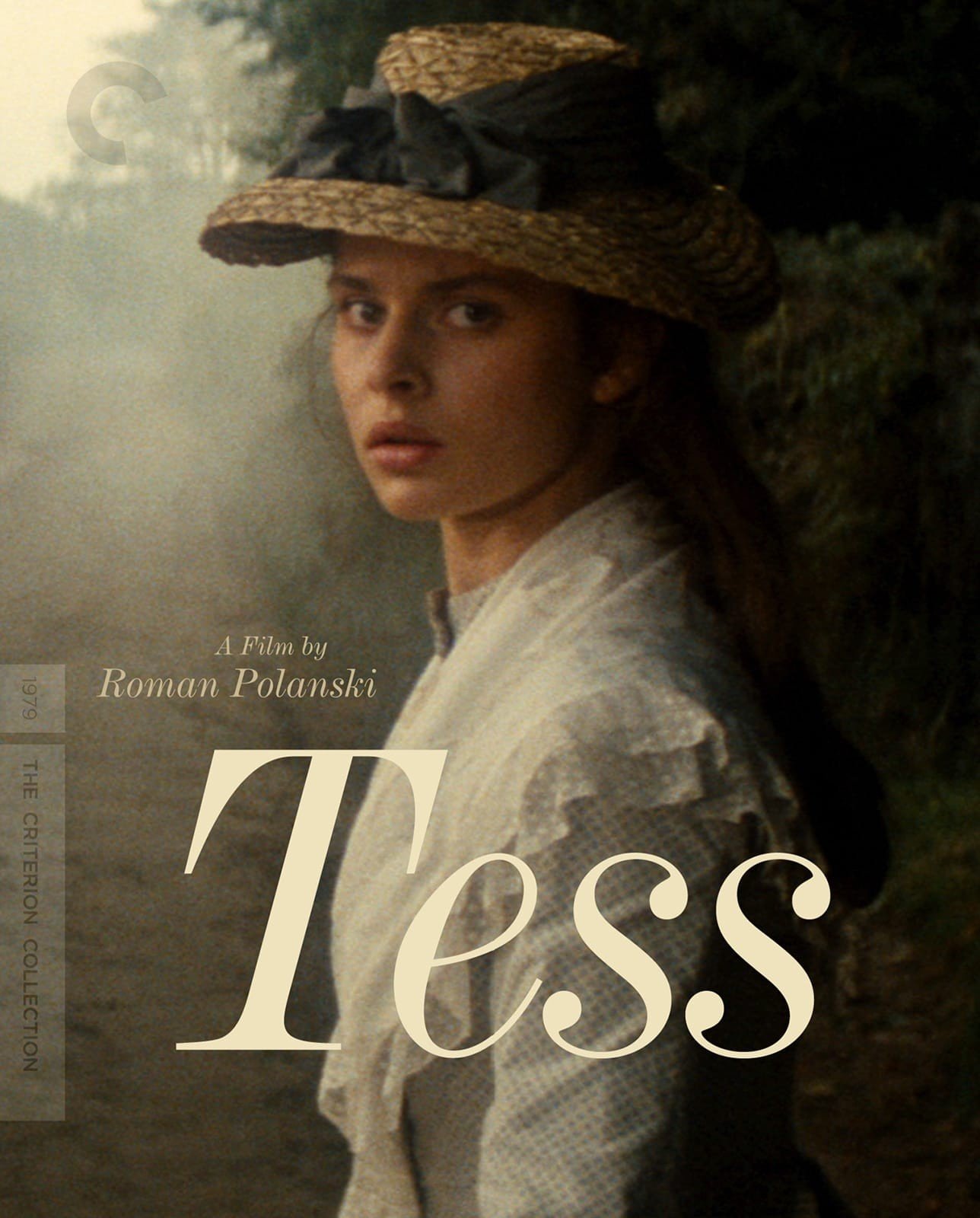 It isn’t difficult to decipher the appeal that Thomas Hardy’s novel Tess of the d’Urbervilles must have held for Roman Polanski. The book was given to the filmmaker by his wife, Sharon Tate, with the idea of turning it into a star vehicle for her, about a year before her untimely death at the hands of the Manson family. Hardy’s pastoral poetry conjured up for Polanski vivid memories of his boyhood sojourn across rural Poland, where, after having escaped from the Krakow ghetto on the eve of its dissolution, he worked a series of odd jobs on farms that were still operating under almost feudal conditions. Tess is thus an almost unprecedented example of sweeping historical epic that also functions as an intense personal meditation on the capricious vicissitudes of love and death.

Though its scenic pageantry and sumptuous cinematography might seem worlds apart from the surreal set pieces and claustrophobic headspaces of his earlier films, Tess connects in a number of vital ways to Polanski’s filmography. In particular, it makes the perfect companion piece to Chinatown. Both films feature evocative period detail that functions as more than window dressing, situating characters in a concrete time and place whose topography impacts directly upon their destinies. Perhaps more importantly, both films are filled with an impotent rage at the sight of innocence defiled. Just as Chinatown’s nominal hero must watch in abject horror as a traumatized girl is swept up in the incestuous embrace of a ruthless patriarch, Tess exposes its viewers to the sexual and economic exploitation of its young heroine, Tess Durbeyfield (Nastassja Kinski)—in the first place by her upstart nouveau riche “cousin,” Alec d’Urberville (Leigh Lawson), and then by heartless employers who don’t hesitate to make hay out of her reputation as a “fallen woman.”

Tess resuscitates the exhausted geometry of the conventional love triangle through the perspicacious psychology it brings to bear on the characters. Presented as physical and attitudinal opposites, Alec and Angel (Peter Firth) are nonetheless sketched in the round. Though he devotedly plays the dandy and cad, Alec has actual feelings for Tess—or, at the very least, is caught in the thrall of a passionate desire that unnerves his otherwise unruffled sense of self. Ostensible freethinker Angel, who’d rather milk cows than study theology like his pastor father, still subscribes to the odious double standard enforced by Victorian propriety when Tess reveals her prior sexual history (and pregnancy) with Alec. Tess herself is far from passive, exhibiting moxie in the face of social hypocrisy (vowing never again to darken the threshold of the local church), even as she betrays a moody fatalism that borders on masochism. As Alec astutely inquires: “What is this strange temptation that misery holds for you?”

Polanski can be a lot freer about sexual matters than Hardy ever could, and he indulges that freedom not only in the major set-piece scenes, but also in little touches like the moment where the landlady is showing Angel and Tess around their honeymoon accommodations. The way she thumps the bed while extolling its virtues, causing Angel to bristle at her forwardness, is especially amusing. One of the film’s more pointed ironies is that Tess and Angel only get to consummate their relationship once they’re reduced to fugitive criminal lovers, stealing a hasty tryst in an uninhabited mansion. Their lovemaking is signaled in properly romantic fashion by flights of birds seen through stained glass. Always one to kick the legs out from under easy sentiment, Polanski also pans the camera across the half-eaten jars of peaches that form part of an impromptu indoor picnic, which provides a far earthier correlative for the delayed gratification of the couple’s carnal desires.

Discovered post coitus by an intrusive charwoman, they must flee from even the margins of respectable society, catching respite as catch can, until they wind up amid the fog-shrouded wastes of Salisbury Plain, where they seek shelter among the standing stones of Stonehenge. This, the script dutifully informs us, was a site not only of pagan worship, but also of blood offerings. And before you can start to whistle “We’ll Go No More A-Roving,” there’s Tess stretched out across an altar-like stone, a scarlet-clad lamb soon to be sacrificed to the local constabulary. As though to indicate that time and nature are alike indifferent to human strife and mortal suffering, this sequence ends with a long shot of the megalithic structure as the sun (little more than a measly disc) rises in the distance.

An ironic aside from early in the novel could easily stand as Tess’s epitaph: “So much for Norman blood unaided by Victorian lucre.” It’s so entirely apt you almost expect to see it superimposed over the film’s final images. Instead, Polanski opts for a flatly declarative statement indicating that Tess was hanged for her crimes in the district capital. With this bold stroke, Polanski wisely casts aside Hardy’s compromised conclusion, wherein Angel and Tess’s younger sister await her execution on the outskirts of town. Their presumptive romantic entanglement (per Tess’s wishes) hastily reconstitutes the unforgiving status quo the novel has done so much to rail against. Polanski will have none of this sodden sop to the bluestockings: In the film, Angel can only trail fecklessly at Tess’s side as she’s led away to her demise.

Making its domestic Blu-ray debut in a superlative new 4K digital restoration, Tess looks absolutely entrancing in its 1080p transfer. Geoffrey Unsworth and Ghislain Cloquet’s award-winning cinematography comes across with a clarity and boldness the earlier Columbia DVD hadn’t a chance of capturing. (Given its painterly compositions and radical lighting schemes, the film invites comparison with contemporary masterworks like Stanley Kubrick’s Barry Lyndon and Terrence Malick’s Days of Heaven.) Color saturation and fine detail are both exquisitely rendered, which is especially noticeable in the painstaking exactitude of the set and costume design. Blacks are deep and dense and artifacts are practically nonexistent. The Master Audio surround mix is a marvel as well, bringing out mood-setting ambient sounds (like the stentorian ticking of a mantel clock, curdled milk dripping into a pail, and the relentless snicker-snack of garden shears) with impressively immersive results. Philippe Sarde’s magisterial score also sounds phenomenal.

Criterion provides over four hours of bonus features for Tess that chronicle the inspiration, production, and subsequent reception of the film in exhaustive detail, yet contain very little in the way of anecdotal overlap. An episode of the French TV series Ciné Regards from 1979 combines behind-the-scenes footage (both on location and in the studio) and an in-depth interview with Roman Polanski in which he discusses his directorial style (his idea that there’s only one ideal vantage point from which to film a given scene) as well as his desire to shift emphasis from films that trucked in the absurd and the surreal to material that would come across as more naturalistic. Also from 1979, an episode of The South Bank Show doubles as a career-retrospective interview with Polanski by host Melvyn Bragg. Polanski talks at length about his formative training in theater, his early films, the nature of adapting a literary masterwork, how visual style can only cannily suggest what words make far more explicit, and the elements that drew him to Thomas Hardy’s novel in the first place.

“On the Making of Tess,” a documentary in three parts that was included on the 2004 Columbia DVD, covers every aspect of the film’s production from the writing and reception of Hardy’s original novel onward, and includes extensive commentary from many of the cast and crew. From 2006, “Once Upon a Time…Tess” is a fascinating attempt to put the film in the context of its release year. This piece features some particularly candid conversation. Nastassja Kinski talks about her hard-scrabble family life: Abandoned by her famous father, Klaus, she was reduced to pilfering goods to put food on the table, was eventually caught in the act, and served time in the German equivalent of a juvenile detention center. As a result, she says, she found it easy to connect emotionally with her character. Criterion also includes an illustrated booklet with an essay by critic Colin MacCabe that expertly dissects the changes Polanski made during the adaptation process.

Tragedy has never looked more ravishing than in Roman Polanski’s elegiac epic. Criterion’s stunning Blu-ray transfer does complete justice to every frame of its pictorial grandeur, while also serving up a heaping helping of instructive special features.