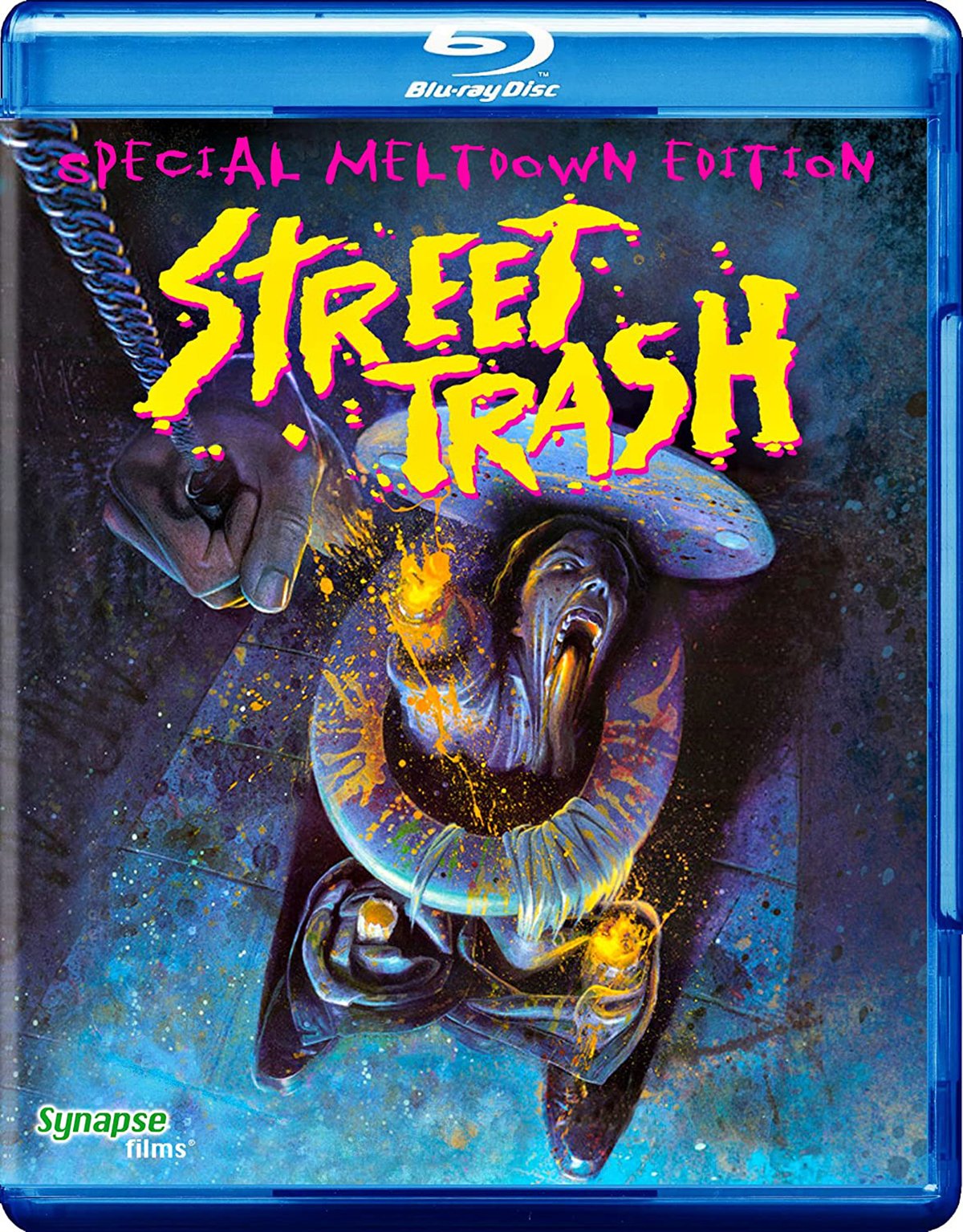 James Muro’s Street Trash is a cult item that’s almost earnestly eager to offend, which is admittedly an odd thing to say about a film that features a prolonged scene in which a group of bums play hot potato with a man’s severed penis. It’s a 1980s American film, like Repo Man, that celebrates the proletariat’s resigned disenfranchisement as a badge of aesthetic honor. Remember the context of the year, 1987, in which Street Trash was released: Reagan was president, New York City was consistently fueling headlines with violent crimes, and even a reliable lefty like Oliver Stone had recently celebrated greed by accident. That was a lot for an underground shock comedy to work with.

In the tradition of any other exploitation filmmakers worth their salt, Muro and screenwriter Roy Frumkes clearly understand the cultural subtext they’re screwing with, and they go about skewering the war between the classes with a ruthlessness that’s often startling. But they’d probably be the first people to admit that their film is also a canny act of hitching a wagon to a number of social causes in a blunt effort to justify a film’s right to do whatever the hell it wants. You can make all sorts of claims for and against Street Trash, but this much is almost indisputable: It’s an astute, elegantly inelegant work of building a narrative around the film’s obviously limited resources.

Or, more accurately, a non-narrative. Street Trash clearly feels that a properly worked-out plot is a bourgeoisie luxury not to be bothered with; conventional plot strands, such as a cop’s ruthless pursuit of a killer, are frequently initiated only to be contemptuously discarded. The film is a series of bum vaudeville routines in which homeless characters, some more convincingly made up than others, go about terrorizing their indifferent social betters. A leggy prostitute is gang-raped and murdered, her body dumped out on the fringes of a junkyard, and we’re almost meant to see this as a punchline. We’re definitely supposed to laugh at the obese junkyard owner, having recently failed to rape an employee in another scene played for laughs, who fucks the fresh corpse and later learns that he may have picked up herpes from one of the bums who killed her.

The satirical point, with which the filmmakers are almost certainly cognizant, is that the bums are empowering themselves in the only way, however grossly disproportionate, that’s left for them in the wake of a culture that’s thrown them out with its discarded milk cartons and empty liquor bottles. The bums treat their victims the way they’re accustomed to being treated, and it’s a sign that Muro and Frumkes are on to something when we notice that we’re only disturbed by the atrocities wrought upon the victims who’re middle-class or above.

Yet the filmmakers aren’t sentimental about the bums, who spit in the face of anyone who wishes to assuage their own guilt with a superficial gesture of charity. If the bums were “humanized,” the film would be intolerably disgusting, as the deck would be stacked in favor of a revenge-of-the-repressed fantasy that ignores the humanity of the people—including most anyone reading this—who were born into adequate circumstances and merely conformed to the situation they were given. Street Trash reduces everyone to the level of a trash receptacle good only for spewing bodily fluids for a few outré laughs, suggesting that this might be the only form of democracy our society can be reasonably expected to legitimately achieve.

This transfer establishes with wonderful clarity the deceptive polish and artistry of Street Trash’s imagery, which abounds in compositions of detailed depth that vividly establish a world of hopeless squalor. Colors pop out at you, and textures have been preserved and revealed with a pristine attention to nuance. The audio tracks are more variable in quality, which may be an accurate representation of the film itself: Voices aren’t always fully discernible, and don’t always appear to be mixed in proper ratio with other diegetic effects, but the score is impressively rich.

Most of the supplements have been carried over from prior DVD editions, but they’re largely excellent. “The Meltdown Memoirs” is a documentary by writer-producer Roy Frumkes (who also produced a doc on George A. Romero) that covers the making of Street Trash in remarkable detail, including footage on-set as well as long interviews that pertain to the fashioning of the original concept as well as the struggle to raise money for such a proudly disgusting picture. Plenty of choice anecdotes, but one of my favorite pertains to Frumkes’s attempt to cast Burt Young as one of the more cultured derelicts. (Young loved the script, but wanted to play the larger role of Bronson, which wasn’t feasible for the concentrated shoot.) The audio commentaries inevitably cover the same ground, but they’re still worth a listen. Rounding out the package is a wealth of promotional materials, deleted scenes, and the original short film that kick-started the project. There’s even a label included that allows you to create your own bottles of the toxic hooch that irregularly figures into the narrative. New for the Blu-ray is an interview with actress Jane Arakawa, whom Frumkes wasn’t able to reach for inclusion in “The Meltdown Memoirs.” Fans should drink this package up, and with good reason.

Street Trash is indisputably the film to see if you’ve longed to watch a homeless wino flush himself down a commode. That’s a compliment.

Review: George Stevens’s The Only Game in Town on Twilight Time Blu-ray