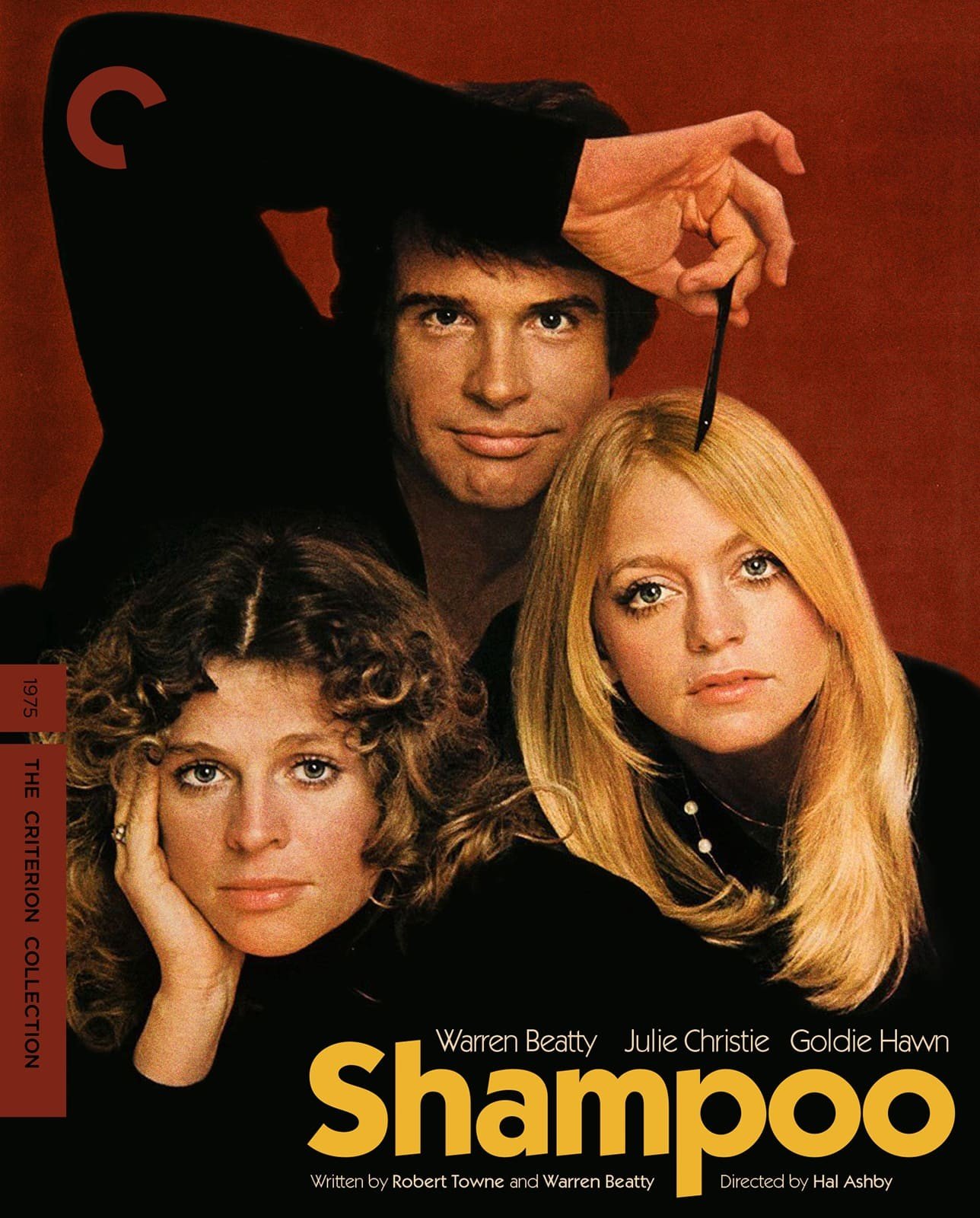 In Hal Ashby’s Shampoo, Warren Beatty’s George, a hairdresser in Los Angeles, resembles a bohemian rock star. His hair is a sort of shaggy bouffant that appears to add several inches to his height while suggesting that he’s a guy who’s always up for it. His wardrobe, a cocksman uniform that includes a leather jacket, a black tank top, tight jeans, boots, and all sorts of accessories, would probably earn Mick Jagger’s approval. George also has the benefit of looking like Warren Beatty, and he lives a lifestyle that’s the dream of many straight men. The joke, however, is that George is more vulnerable than any of his conquests, who are understood to be conquering him, utilizing him as a counselor as well as a battering ram against the other men in their lives. George suggests a Hollywood starlet in the guise of a male alpha, and Beatty mixes conventional gender coding with biochemical ease, investing Shampoo with a modernity that’s far ahead of most romantic farces.

George’s power springs from his relinquishment of the same. He’s the stud you can save—and his vulnerability isn’t merely a put-on. Throughout the film, Beatty allows one to see that George authentically feels trapped tending to adoring women’s hair by day and their bodies by night. George wants his own salon but has no credit, financial savvy, or even much intellectual sense, as he’s an artist who only knows his art. Beatty invests this entrapment with a musical tremulousness, lucidly embodying a feeling of being emotionally stymied. When George is pushed by someone to tell the truth, such as by his neglected girlfriend, Jill (Goldie Hawn), he shuts down, sputtering off in a stammer that’s poignant and infuriating. George is trapped because he must always be in flight, chasing the next high of possibility.

George’s predicament is delicately informed by Beatty, co-writer Robert Towne, and Ashby with a culturally resonant symbolism. Set on the day and night leading up to the 1968 presidential election, which would be won by a candidate who would go down in disgrace, Shampoo equates its characters’ lost-ness with that of the United States itself. Nineteen sixty-eight is sometimes considered to be the year that the counterculture lost whatever cache or direction it may or may not have had, and Ashby informs Shampoo with a corresponding sense of disillusionment. Indeed, the smog-capped Los Angles of this film suggests a corroding fantasy land. In 1968, the United States was moving into a paranoid, ultra-capitalist direction that’s better suited to a businessman like Lester (Jack Warden).

At its broadest, Shampoo operates as a sexual farce, in which Lester and George, two men who’re opposites in every conceivable fashion, engage in an almost accidental battle of wills. Farces are usually governed by speed—by precise clockwork plotting—but Ashby fashions a looser, more atmospheric and behaviorally driven tapestry that recalls Robert Altman’s films, only without the snide-ness that can seep into the latter’s work.

Ashby particularly lingers on the effects that Lester and George’s modes of selfishness have on the women in their lives, particularly the two they share: Lester’s wife, Felicia (Lee Grant), and mistress, Jackie (Julie Christie), who’re understood to be bored and despairing players in their own right. While these people engage in their sexual roundelay, floating between two parties that epitomize the differences and the similarities between the conservative establishment and the counterculture, their country edges on the verge of a crisis. This contrast between the personal and the political brings to mind the similar schematics of The Rules of the Game and Cabaret.

Jackie and George have a past together and they’re parallels of one another, both gorgeous hustlers who’re trying to go “legit” with Lester’s help. Beatty and Christie have a simultaneously easy and freighted chemistry that’s sensual yet unusually mournful. One senses that they know they’re reaching the end of a lifestyle that they couldn’t define to begin with.

The intensity of Jackie and George’s relationship also has an unexpected side effect that serves as a testament to Beatty, Towne, and Ashby’s humanism as filmmakers: Lester is allowed to evolve into a nuanced character. Lester may be supporting Richard Nixon, and may be the sort of white-collar hustler who’s ruining this country, but Ashby and Warden don’t make him an easy punchline. In many comedies, Lester would be the foil—the clueless Ralph Bellamy figure. But in Shampoo he’s a rumpled aging man who’s eager to join the party, who knows he’s lucky to have the power to enter Jackie and George’s orbit but who also knows that he can never really be among them. In the film’s second greatest scene, Lester finds himself at a young hipster party and rolls with it, hanging out and drinking, pushing himself beyond his social parameters and finding fleeting acceptance.

In Shampoo’s greatest scene, George and Lester put away the bullshit and come clean with each other, suggesting a fantasy of reconciliation between the counterculture and the conservative mainstream. Lester knows George has fucked every woman in his life, and George assumes that Lester was never intending to fund his salon. When George returns to his own house, Lester has the place surrounded with goons, but the men can’t help but enjoy one another; they recognize and respect their differing modes of con artistry, which are ultimately similar underneath their varying appearances and classes. Warden and Beatty use their contrasting energies to forge a complex web of masculine emotions. George’s vulnerability is intoxicating to men as well, especially those, like Lester, who’ve never enjoyed George’s easy way with people. Lester values money and business because they are his power, his sex. Lester and George, and also Felicia and Jackie, are all understood by Shampoo to be beautifully foolish, easily distracted, and selfish. Human, in other words.

I’ve always remembered Shampoo as having a somewhat shrilly bright look that embodies its obsession with fading idealism. The background images do abound in whites, which have been rendered here with a strong sense of body, though the foreground colors are often quite rich and robust, especially in terms of the wardrobes worn by the characters. George’s clothing, for instance, sticks out from the whites like a deliberate aphorism. By heightening this contrast between the foreground and background of the film’s images, this transfer coaxes out yet another cultural clash within the narrative. Skin textures sometimes seem a little too bright, but that might be the L.A. sun for you. Two audio tracks have also been included here, a monaural and a 5.1 DTS-HD Master Audio surround. If you have the speakers, the 5.1 track informs the party scenes with a sense of immersion that’s not quite available with the monaural, though the latter presents the intimate dialogue sequences with greater clarity. Both tracks are generally sturdy and well-detailed though.

In an excellent discussion that was filmed this year, critics Mark Harris and Frank Rich elegantly parse Shampoo’s vast web of cultural influences; all modes of politics are covered, from gender to financial to sexual to generational. Harris astutely claims that Shampoo could be part of a Los Angeles trilogy along with The Long Goodbye and Chinatown, as all use the city as a metaphor for the contemporary evolution of the United States. Harris and Rich also remind us that the film’s sexually blunt humor was still somewhat taboo in 1975, particularly Jackie’s exquisitely delivered line about wanting to suck George’s cock. In an excerpt from a 1998 appearance by Warren Beatty on The South Bank Show, the filmmaker discusses Bonnie and Clyde and Shampoo. Beatty notes that he always found George rather pathetic, which he felt some critics were too distracted with his own fame to discern. He also shares a terrific anecdote about Bonnie and Clyde’s sound mixing, and briefly elaborates on his own politics have informed his work. A booklet featuring an essay by Rich rounds out a slim but sturdy package.

The film is a great comedy, character study, and tragedy that diagnoses the spreading rot of the United States without losing its sexy, empathetic cool.

Review: The Gender-Flipped Company Is an Imperfect but Loving Toast to a Classic