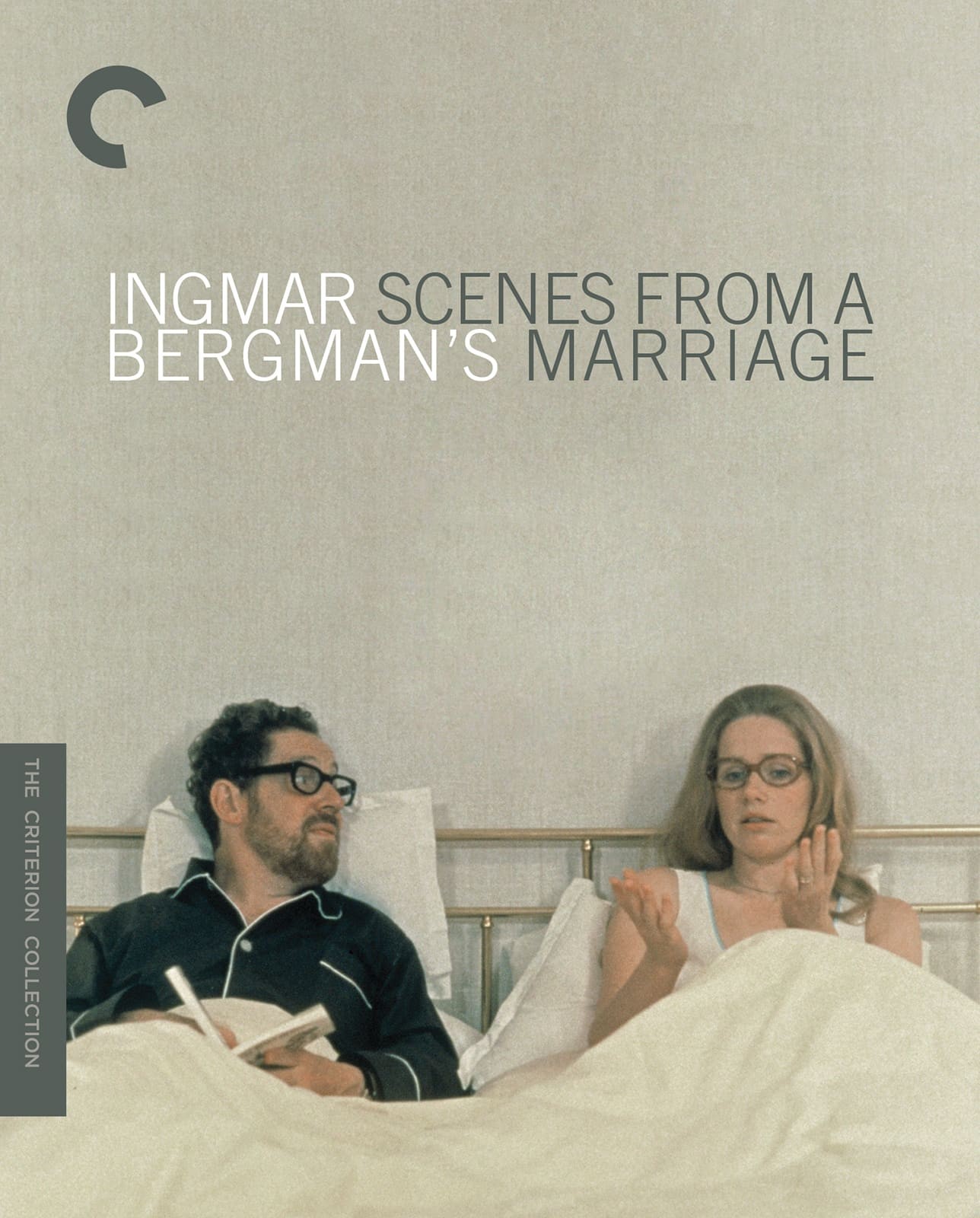 Ingmar Bergman’s Scenes from a Marriage opens on an interview, with a reporter discussing with Marianne (Liv Ullmann) and Johan (Erland Josephson) the particulars of their 10-year marriage. The interview is meant to be a celebratory puff piece, espousing the secrets of Marianne and Johan’s success as spouses, parents, and bourgeoisie professionals, but there are cracks in the façade. Johan, an assistant professor, has no trouble talking about himself at length, while Marianne, a divorce attorney, defers to Johan. Throughout the sequence, Ullman and Josephson punctuate their dialogue with gestures that telegraph uncertainty and passive aggression, from the way Marianne and Johan hold their bodies in relation to the other, to micro movements of their eyes and brows. Minutes into this nearly five-hour opus, which was conceived as a Swedish miniseries and aired in six episodes in 1973, we instinctively know that Marianne and Johan’s relationship is in trouble.

This opening interview is Bergman’s sly parody of the myths that, with pop culture’s encouragement, we indulge about marriage, and that nest inside a larger myth of suburban life: that the acquiring of a job, home, and family represent a crossing of a finish line that contextualizes subsequent life as a prolonged victory lap for our success. Countless films concern the quest for stability, which usually requires the taming of a hero’s wilder impulses. Scenes from a Marriage profoundly reveals such a narrative to be absurd and undesirable. If we are forever comfortable, then we are stagnant, and stagnancy is aligned with uselessness and death. Comfort might give one too much time to think as well, as Marianne and Johan are intelligent people who’re disappointed in themselves and forever gnashing over their various notions of their “real selves” and whatever elements of their being that they have suppressed in the name of conventionality.

At one point in the film, Johan even says that he has a mental picture of himself that doesn’t “correspond to reality,” and this sense of distance from oneself is Bergman’s ultimate concern in Scenes from a Marriage as well as in many films throughout his vast career. The filmmaker follows Marianne and Johan as they face the evasions of their relationship, praising and eviscerating one another while fighting and having the frenzied sex that was impossible in the polite years of the relationship. Johan initially appears to represent a deviation from the cliché of the intellectual who resents his wife and strays with younger women, as he celebrates boredom as a sign of maturity. And Marianne similarly finds ways to rationalize the staidness of the couple’s routine, though these are pretenses. For roughly two of the film’s hours, Johan and Marianne hold these pretenses up expertly, until Johan’s love for another woman unleashes torrents of bottled-up rage and resentment, which are foreshadowed by another couple’s bitter argument early in the narrative.

The sheer length of the film serves to de-sentimentalize the existential quandaries of the heroes, who revisit topics of “truth” and “self” so often as to purposefully court tedium. We yearn for this couple to shut up, as Bergman captures the feeling of being trapped with a squabbling couple, with few subplots that might give the audience a break from this self-absorption. What Marianne and Johan can’t face, until the film’s transcendent final episode, is that they are in touch with themselves, as their suspicions of their own ordinariness are correct. They are talented but unremarkable people with disappointments that are widely shared by the middle and upper classes of various societies. For self-conscious people, especially stifled artists, as Marianne and Johan both are, such ordinariness can be intensely painful, though their analysis of their own pity is yet another indulgence. Their quest for truth is the true evasion, as there’s nothing in particular to find.

A central irony gives Scenes from a Marriage its operatic power: Marianne and Johan’s suppressed artistic instincts come out in their arguing, whipping their love up into true passion. Like many of Bergman’s best characters, Marianne and Johan are brilliant actors who create multiple dramas and realities on the fly, which are driven by sentiments of astonishing rhetorical power. Lacerating each other, attacking their sex life, their parents, their own pomposity, gender politics, and even their children, Marianne and Johan inform their lives with the dramatic heft of an Ingmar Bergman film, and their individual power in the relationship alternately grows and wanes over the years, in sync with their successes and failures in other fields. Parallel interludes, featuring parents and other lovers, offer commentary on Marianne and Johan’s own relationship, affirming its universality. In a heartbreaking moment late in Scenes from a Marriage, Marianne bridges the divide between herself and her mother (Barbro Hiort af Ornäs) by daring to inquire about the elder woman’s own frustrated married life, which ended unceremoniously with the husband’s death. Politeness in this film is the prison from which Marianne and Johan break free, allowing them to gradually grow.

Bergman shows the annihilation of politeness to be a lancing of fear. Johan and Marianne’s castigations free each person of the fear of what their partner might be thinking of them, as their arguments confirm their respective suspicions to be true, which is less painful than the fear itself. (Facing desertion, adultery, and divorce, Marianne for instance becomes a modern woman.) Bergman evinces a vast understanding of the passive aggression that subsumes relationships, and one senses that he’s facing his demons as a man, lover, and artist. Bergman strips himself as bare as his protagonists, constraining much of the film to rooms that suggest under-dressed theatrical stages, with filmic grammar composed of intimate close-ups of the leads’ faces and occasional shots of their bodies folded over one another or into themselves depending on the scale of their communion. The film feels rigorously planned yet has the forcefully spontaneous innovation of improvisational theater. There’s nowhere to hide in other words, as Scenes from a Marriage depends on the artists’ ability and willingness to plumb deep-seated resentments and exaltations.

By the end of Scenes from a Marriage, viewers may feel as if they’ve witnessed the entire spectrum of Marianne and Johan’s relationship, as Bergman and his actors offer a simultaneously micro and macro drama of the perils of cohabitation. After Marianne and Johan say everything that can be said, in seemingly every fashion imaginable, all that’s left—somewhat hopefully—is an exhausted, resigned embrace.

This transfer honors what Phillip Lopate calls the “scruffy elegance” of Scenes from a Marriage. The colors of the image, though purposefully muted, are richer than they were in the original Criterion DVD. And facial textures, which are this film’s ongoing obsession, are informed with a revelatory sense of detail. Every pore, every freckle, and every tear is mercilessly vivid on this disc, both in the TV and theatrical versions of the film. That said, the visceral graininess of the 16mm compositions has also been preserved, affirming the film’s docudramatic intensity. The monaural soundtrack is clean and robust, delicately balancing the film’s torrent of dialogue with the quieter diegetic effects that aurally define the characters’ movements throughout the frame.

These supplements have been ported over from Criterion’s 2003 DVD edition of Scenes from a Marriage. In an archive interview from 1986, Ingmar Bergman talks openly and affectionately of the film, discussing how it was based on his friends and how they ironically didn’t see themselves in it—perhaps echoing Marianne and Johan’s own initial tunnel vision. In lovely interviews from 2003, Liv Ullmann and Erland Josephson talk of their collaboration with Bergman and with one another. Ullman offers an especially beautiful analysis of the scene where Marianne discovers that all of her and Johan’s friends already know of the latter’s infidelity, and also goes on to elaborate on Bergman’s mix of rigidity and flexibility. Bergman was a stickler for honoring the dialogue as written but allowed the actors to explore all sorts of tonalities in between the lines. An interview with Bergman scholar Peter Cowie, also from 2003, parses the many differences between the five-hour TV cut and the three-hour theatrical version of the project, noting the sense of concentration in the theatrical version, which prunes many references to the couple’s life outside of their relationship. A sharp and perceptive essay by Phillip Lopate rounds out this sturdy but somewhat dated package.

Both versions of Ingmar Bergman’s epic marital battle royale have been outfitted with grittily beautiful and highly detailed new transfers.

Blu-ray Review: Terrence Malick’s The Tree of Life on the Criterion Collection