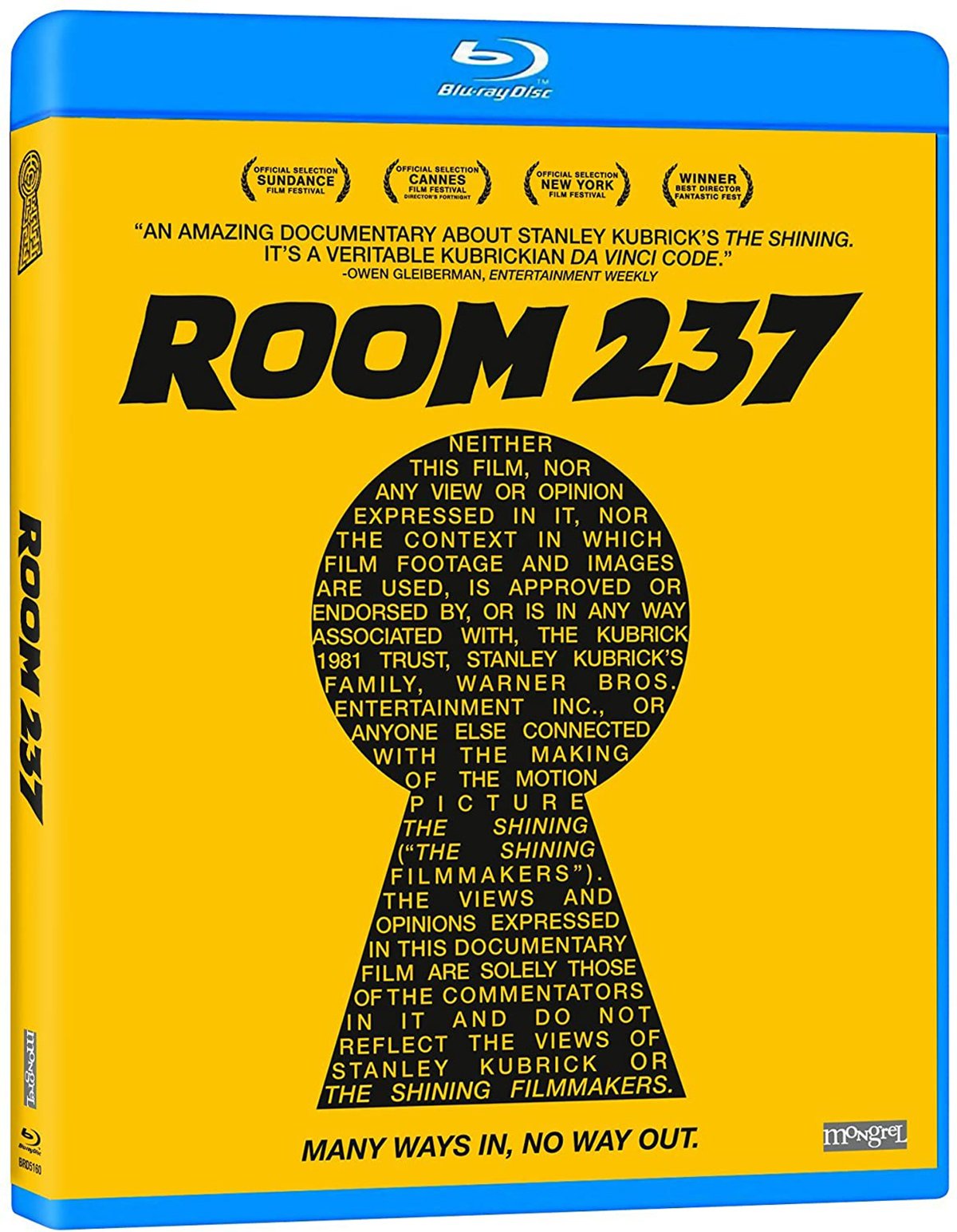 Rodney Ascher’s unconventional Room 237 examines that quirky quiddity about Stanley Kubrick’s The Shining that compels certain viewers to fabricate intricate all-encompassing interpretations, as though the one true meaning of the film were hidden away behind a locked door and only they possessed the key. To some extent, this desire to decode springs from the nature of the material: The Shining is a foreboding puzzle box of a film (glacial in pacing as well as emotional approach) that toys with many of the horror genre’s most iconic tropes, while simultaneously succeeding as one of the eeriest explorations of the murderous rage blooming like a blight in the bosom of the prototypical nuclear family. Viewers’ obsessions with the film’s semiotic surcharge also have a lot to do with Kubrick’s own obsessiveness, the meticulous (some would say autocratic) control he exerted over every aspect of film production. Given the preponderance of the labyrinth metaphor throughout the film, it’s easy enough to envision Kubrick fastidiously laying out a trail of breadcrumbs for you to follow into the maze’s monstrous middle.

Room 237 makes room for five of the film’s more audacious interpreters to sketch out their theories in some detail. Bill Blakemore contends that The Shining is preoccupied with the genocide of the Native Americans in particular and, more broadly speaking, the bloody-minded business of history as such. Geoffrey Cocks scrutinizes the visuals for reference to the Holocaust. Jay Weidner reads the film as Kubrick’s apologia for supposedly faking the Apollo 11 moon landing. Ordinarily, one might be tempted to argue that these interpretive schemes run the gamut from the plausible to…well, let’s just say less plausible. But that’s entirely beside the point here. Ascher studiously refrains from any overt editorializing, instead allowing his deft visualizations of the speaker’s testimony to speak for themselves. The age of home video brings with it the increased visual clarity of high-definition, as well as the slew of exegetical extras that can be packed into the Blu-ray disc, so that this particular manifestation of the repetition compulsion isn’t only condoned, it’s positively sanctioned. In other words, if a film’s worth watching twice, it’s worth watching 2001 times.

Less cause for conceivable contention comes from Room 237’s other participants. Juli Kearns explicates her cartography of the film’s impossible spaces: the byzantine topography of the Overlook Hotel’s hallways, offices, and guest rooms. Finally, John Fell Ryan overlays the Overlook on top of itself, playing The Shining backward and forward simultaneously, and noting the formal synchronicities thereby revealed. Fell’s project is less argument than experiment, arguably more akin to performance art like Douglas Gordon’s installation piece 24 Hour Psycho. Apart from reviewing scenes in The Shining with all the infinitesimal scrutiny given to the Zapruder film, Ascher incorporates clips from other Kubrick films to provide spots of local color and also to illustrate a particular point, as well as clips from assorted other films (Schindler’s List, for instance, stands in for the Holocaust film Kubrick never made). Culling footage of a theater audience rapt with attention from Lamberto Bava’s Demons is an especially revealing touch, since that film hinges on the uncanny interaction between viewer and viewed. Ascher’s inspired choice makes graphically explicit comparisons between the viral outbreak of demonic possession in the Bava film and the equally virulent passions of his subjects’ cinephilia.

MPI Media Group’s 1080p/AVC-encoded Blu-ray transfer of Room 237 looks suitably impressive: its various cinematic source material (whether Kubrick or Lamberto Bava) rendered with remarkable clarity. There’s the choice between a Master Audio surround track and a two-channel PCM mix, with the surround track sounding far more dynamic and immersive, especially when it comes to soundtrack, a deft blend of Wendy Carlos and Rachel Elkind’s haunting original score with new Shining-inspired material from the likes of electronic music project known as The Caretaker.

Kevin McLeod, a.k.a. mstrmnd, who, though mentioned once or twice in the film, initially declined participation in the project, provides a commentary track that covers his own unique thoughts on The Shining. For McLeod, the film at bottom concerns the battle between visual literacy and print-based literacy for the soul of young Danny Torrance. Because it plays over the extant film, and thus lacks the visual aids that Ascher lavishes on his five original participants, you have only McLeod’s rambling delivery to contend with. As for its interpretive merits, I’ll leave that to the discernment of the individual viewer. The other major bonus feature here is a nearly hour-long panel discussion filmed at the First Annual Stanley Film Festival, a horror fest located at the Colorado hotel that inspired Stephen King’s original novel. Participants include Leon Vitale (an actor in several Kubrick films as well as his long-term personal assistant), Room 237 participant Jay Weidner, director Rodney Ascher, and Mick Garris, purveyor of the King-scripted miniseries version of The Shining. Topics discussed include Kubrick’s possible responses (as filtered through Vitale) to some of the more colorful interpretations of The Shining, King’s still-smoldering hatred for Kubrick’s film version, and a somewhat more nuanced discussion of some of the primary differences between book, film, and TV versions. Alternately insightful and amusing (mostly owing to Vitale’s acerbic putdowns), this is essential viewing. Then there are 11 deleted scenes, which amount to 23 more minutes of abstruse theorizing, presented basically audio-only over a static screenshot of somebody’s laptop’s audio software. Elsewhere, there’s a featurette that delves into the making of the doc’s music, and a discussion with poster artist Aled Lewis. Finally, there’s an assortment of alternate trailers.

A love letter to obsessional cinephilia, Rodney Ascher’s Room 237 gets a sterling Blu-ray transfer and some illuminating extras from MPI Media Group.