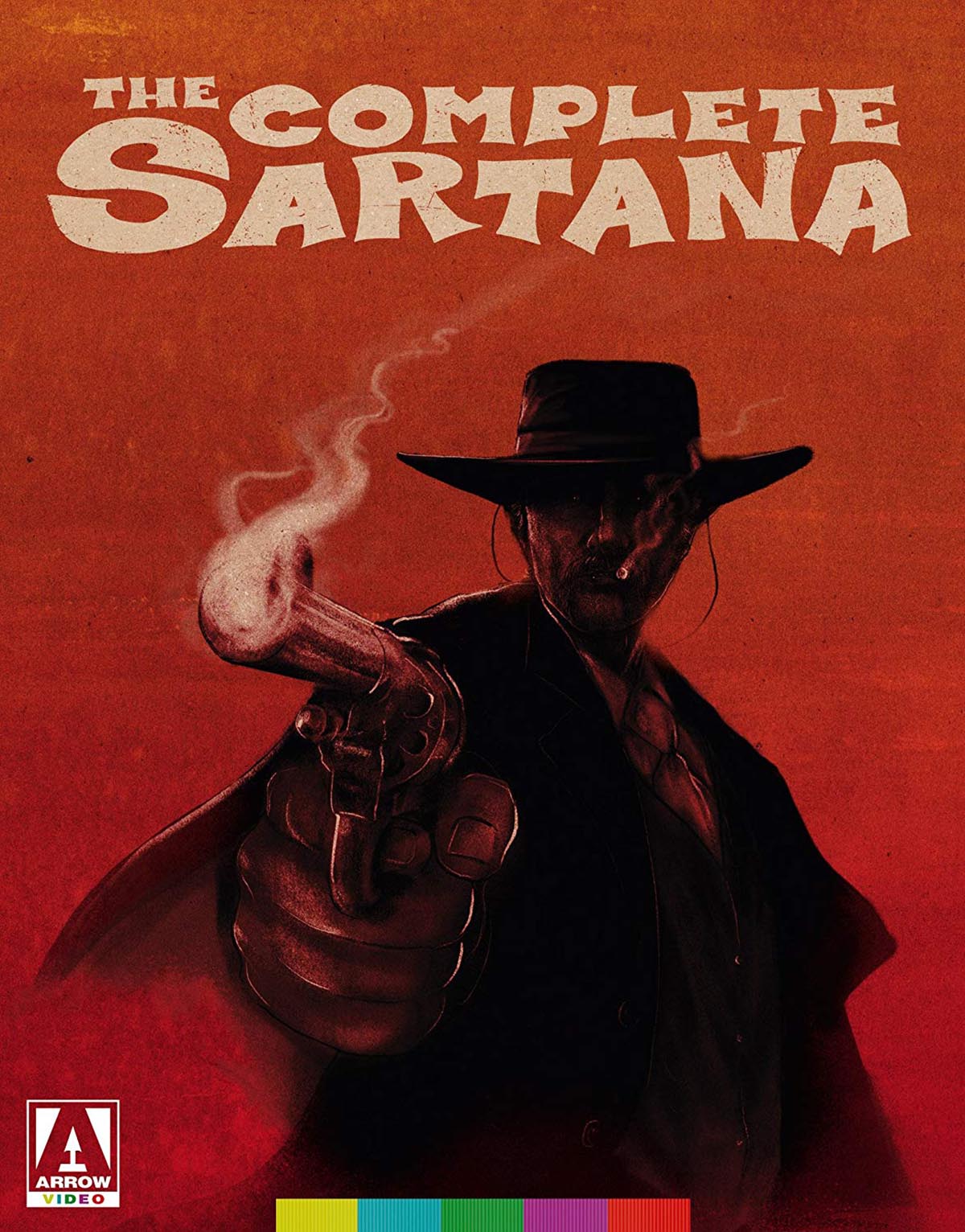 What unites the wildly unpredictable and unabashedly entertaining Sartana films—despite the disparate contributions of two directors, a bevy of screenwriters, and two very different leading men—are the iconographic elements of the eponymous character himself: his red-and-black magician’s cape, the pepperbox pistol and other baroque gadgets that he has at the ready, not to mention his ubiquitous smoke-billowing cigarillo. Their storylines, often structured as a mystery, are ingenious Rube Goldberg contraptions that deliver sudden reversals of fortune, typically emphasizing the perils of deceptive appearances. There’s loads of violence and gunplay throughout, with occasionally astronomical body counts, yet little in the way of graphic blood and guts, which lends the films an aura of old-school charm.

Co-written and directed by Gianfranco Parolini (billed on screen as Frank Kramer), If You Meet Sartana…Pray for Your Death opens with Sartana (Gianni Garko) rescuing an elderly couple in a stagecoach from a gang led by Morgan (Klaus Kinski). Over in another part of the desert, a shipment of gold is hijacked by another gang that’s subsequently mowed down with a Gatling gun by Lasky (William Berger), who, in turn, discovers the strongbox to be full of rocks instead of gold bars. The central mystery in the film will concern what happened to the gold.

In the baroquely convoluted storyline, these factions head into town, where they play out various permutations of alliance and opposition. While the general setup for the film may seem stereotypical, the devil is in the details of the execution. Parolini brings all the style—painterly compositions, sleek camera movement, brisk, cleverly blocked action set pieces—we have come to expect from Italian westerns. But he takes things just a bit further: Indeed, the last reel of the film looks like it could have been shot by Mario Bava.

I Am Sartana, Your Angel of Death finds Sartana (Garko again) framed for a bank robbery he didn’t commit. Director Giuliano Carnimeo, who would helm the rest of the series, brings an even more outrageous eye to the proceedings: The camera tilts and flops over every time someone gets gunned down (which is often). Carnimeo seems to favor distortion, like the bug-eye prismatic effect achieved by shooting through a beveled beer mug. The storyline provides a more amusing (and larger) role for Kinski, playing the bizarrely named Hot Dead, a gun forced to hire himself out due to an unending losing streak at gambling.

With Sartana’s Here…Trade Your Pistol for a Coffin, George Hilton steps into the title role for a single outing. The film also features a larger role for a female lead than earlier entries in the series, which had been populated almost exclusively by men. But the role isn’t terribly novel, as Trixie (Erika Blanc) the saloon owner is your prototypical femme fatale. Where the film does inject some novelty is in the person of Sabbath (Charles Southwood), a poetry-spouting bounty hunter dressed entirely in white to contrast Sartana’s black-based ensemble.

Garko returns for Have a Good Funeral My Friend…Sartana Will Pay, which centers on a murdered prospector whose land is said to contain a motherlode of gold. When the man’s niece, Abigail (Daniela Giordano), turns up in Indian Creek to secure her inheritance, it seems like everyone in town has a plan to wrest the gold away from her. In addition to Giordano’s appealing feminine presence, there’s also genre film stalwart Helga Liné as a saloon girl. Apart from the increased roles for women, the film trades in a good deal of racial stereotyping with regard to the presence of the Fu Manchu-like Lee Tse Tung (George Wang), whose den of iniquity features prominently in the storyline.

Light the Fuse…Sartana Is Coming, the final film in the series, is also arguably the finest. The opening has Sartana gunning down a corrupt sheriff and allowing himself to be sent to a brutal penitentiary for it. (The prison, incidentally, is designed to look like a Vietnam War-era POW camp.) Turns out he’s there to meet up with Granville (Piero Lulli), who has information about two million in gold and counterfeit bills that went missing after a mysterious three-way gunfight. The film keeps upping the ante throughout, replete with double- and triple-crosses and ever-escalating gun battles. The last battle culminates in the series’ most surreal imagery: Sartana playing the organ in middle of Mansfield’s main street, only to have the musical instrument morph into a fantastical instrument of death.

All five films in the Sartana series, each housed on its own Blu-ray disc, are presented in new 2K restorations. If You Meet Sartana…Pray for Your Death was sourced from a 35mm print, and as a result looks the weakest by comparison, with some distracting (and occasionally persistent) vertical scratches and other artefacts evident. The remaining films were sourced from original camera negatives, and the results are uniformly outstanding. Colors are vivid, flesh tones lifelike, grain properly filmic, and black levels largely uncrushed. The transfers exhibit excellent depth and clarity. Each film includes both Italian and English tracks in Master Audio mono mixes. The Italian tracks are the default, but the English may be your better bet, since they tend to be more quirkily idiomatic, and many of the characters appear to be delivering their lines in English in the first place. Regardless of your choice, dialogue comes through clearly, ambient effects have some depth (albeit at times a bit boxy), and the idiosyncratic scores from the likes of Piero Piccioni and Bruno Nicolai sound terrific.

Arrow Video includes a bumper crop of supplements for their Sartana box set. The first, second, and fourth films in the series come with commentary tracks, the first from German documentary filmmaker Mike Siegel, while the others feature film historians C. Courtney Joyner and Henry Parke. After laying out his genre bona fides at some length, Siegel dives into the series as a whole, describing the first appearance of the Sartana character as a black hat in a non-Sartana film, then leaning heavily into the cast and crew members’ connections to many other Italian westerns. Siegel provides an intriguing European appraisal of the films. Joyner and Parke exhibit an amiable tag-team approach, with Joyner more often than not taking point in the discussion, and Parke putting in his take from time to time. Scattered across all five discs are lengthy interviews (some archival, some newly filmed) with various cast and crew members, whose recollections range from a bit fuzzy to crystal clear. The featurette “Light the Fuse: Sartana’s Casting” provides biographical snippets for a number of familiar genre players who turn up throughout the series. Each disc comes with a gallery of colorful and strikingly designed promotional materials from the Mike Siegel Archives.

Review: Joseph L. Mankiewicz’s All About Eve on Criterion Blu-ray